Friendly Holiday Reminder That Pets Are Not Toys

Thinking this might be the year you gift a loved one with a pet? You should really think about that gift decision. Animals are a commitment, they need constant attention and love and if you're not equipped to fully take on that role, along with multiple responsibilities, then you may want to take a moment and think about what you're getting yourself into.

We're not saying that one shouldn't adopt an animal, we believe having an animal in your life enriches it but it's important to realize everything that comes with a pet. Yes, it's hard work, and it is extremely rewarding if you put the effort into it, but if you don't have the time then perhaps now is not the right time.

The holidays are coming up and here is a friendly PSA when it comes to gifting animals! 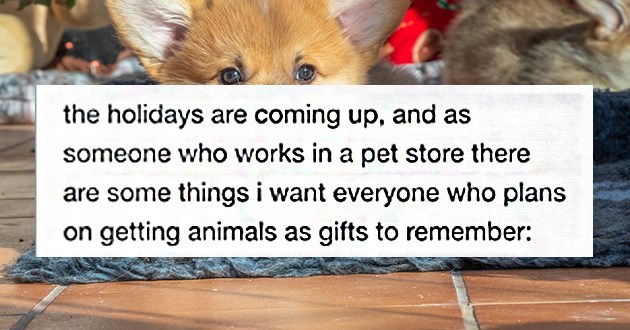 Goooood morning, fellow animal lovers who have excellent taste or otherwise wouldn't be here! There's truly no better way to start the day with some fresh animal memes! Memes, in general, are an excellent source for laughter, and when you combine that with animals, pure magic happens. And what could be better than starting your day off with a few laughs? Hopefully, it'll set the tone for the rest of your day and it'll be a happy one filled with laughter!

If you're in need of a pick-me-up, or if you simply wish to continue with this laughter train, then be sure to venture over to last week's delightful animal memes that are still quite fresh!

Does this bird remind anyone of someone they know? We thought so too, this is bird was most likely a cat in its previous life. Constantly knocking things off a surface? That has cat written all over it! Perhaps, it's a classic case of bird hardware running cat software. We've seen it before.

If a cat were to witness this bird doing what he does best, throwing things, we would assume the cat would be very proud of his successor. As are we. This has been a wonderfully short compilation of a single bird who has the need to throw, and we recognize that decision and applaud it. Why? Because this bird is our inner selves. We would love nothing more than to throw everything off the table right now but we're held back. This bird lives freely, by no one's rules. This bird is wild.

We love to take a shot of birbon whenever we can, and it's been too long since we last had! Birb memes are memes we can always count on to deliver the laughs, the intensity, and just all-around-insanity. Who knew bird memes would become as incredible as they are? When it comes to animal memes, bird memes definitely rank in our top 5.

Birds are wild, crazy, lawless creatures who don't take sh*t from anyone. That's probably why their memes sometimes deliver the best content. When you're feeling down and need a good laugh, you can always count on the birbs.

Get ready to get those feathers ruffled, folks, here come the birbs! 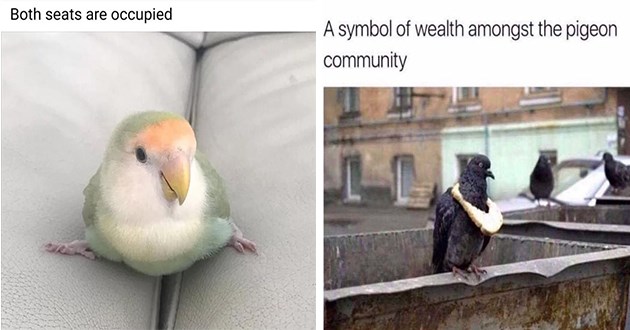 Cockatoo Mimics Cats Around Him (Video)

When you have poor social skills but try to make friends anyway. This cockatoo just wants to fit into the cool cat crew that he's living with! Not only does the cockatoo meow at the cats, when one cat got too close, you can also hear the bird hiss at it. True feline language has been mastered by this smart birdie! If those cats were confused as to why this other weird-looking "cat" was meowing at them, that hiss would've solidified him being one of them.

Good job, Sir Cockatoo, we are thoroughly impressed by your dedication to infiltrate the feline crew. 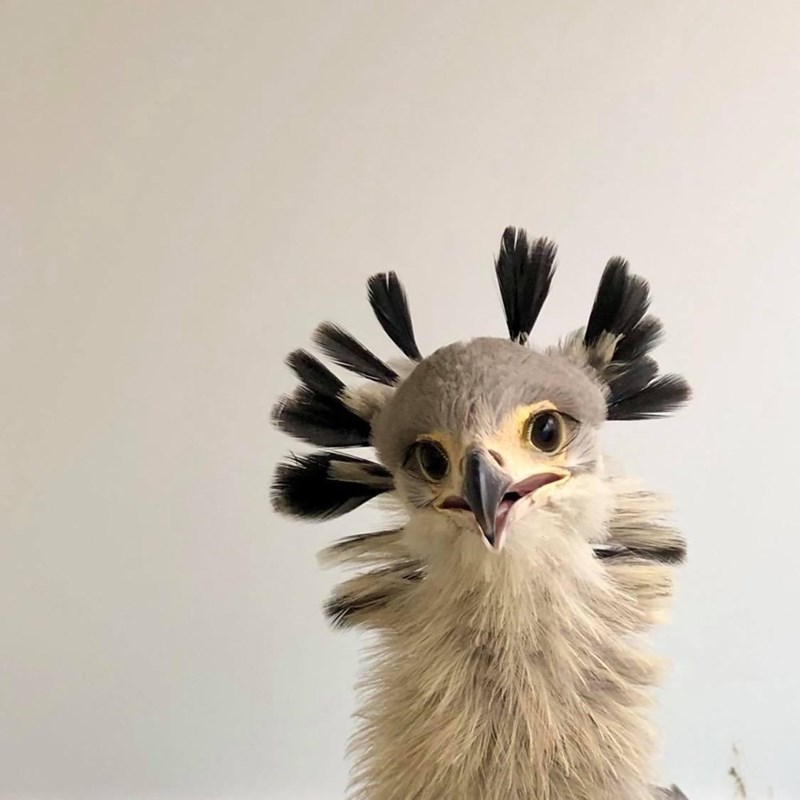 Via supersquee
Repost
Recaption
Comments
I Can Has Cheezburger?
Favorite

Size of a kiwi bird

Via biggest-gaudiest-patronuses
Repost
Recaption
Comments
I Can Has Cheezburger?
Favorite

Animals Of Instagram Spotlight Of The Week: Zeus, The Blind Owl

Once a week, we will be featuring an extraordinary animal account on Instagram! Their story, the adorable pictures, and pawesome videos! This week's spotlight goes to Zeus, the blind owl!

You've probably seen Zeus before, he went viral for his incredible peepers! Eyes that look as if they contain the whole universe and all the answers to the unknown. When we hear or think of a 'Wise Owl,' it's Zeus who we think of. Zeus may be blind but he sure has the most enchanting eyes.

Zeus is a Western Screech Owl with a great wingspan. On his Instagram, it is mentioned that he has about 10% of his vision, and is able to see shapes and memorize his immediate surroundings. He currently is being cared for at the Wildlife Learning Center in Los Angeles, California. The wildlife center's mission is to "provide public education that inspires people to care for our wildlife, to care for our environment, to develop a deep interest in the life sciences, and to give loving care and sanctuary to animals in need."

Read up on last week's star on Instagram, Rex, The T-Rex Cat! 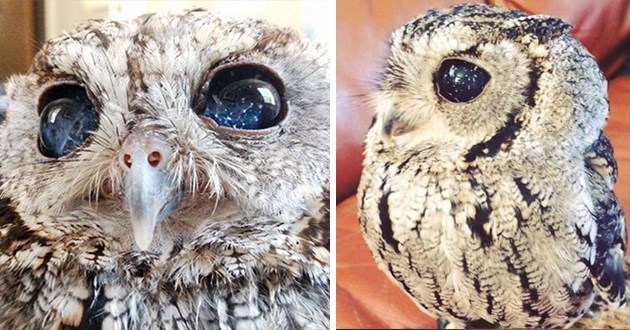 Not only have we never heard a hummingbird snore, but we also don't think we've ever seen one sit still for more than 10 seconds! That alone is an incredible triumph to have captured. Not only is this adorably wee hummingbird sleeping, but to capture the sound it makes while it sleeps? Again, we're just blown away by this video on all accounts.

And to top it all off, the snore itself is unexpected and simply amazing. We cannot get over this little and powerful whistle-snore. Who could've guessed it! Thanks, BBC, for always bringing such incredible animal moments into our lives! 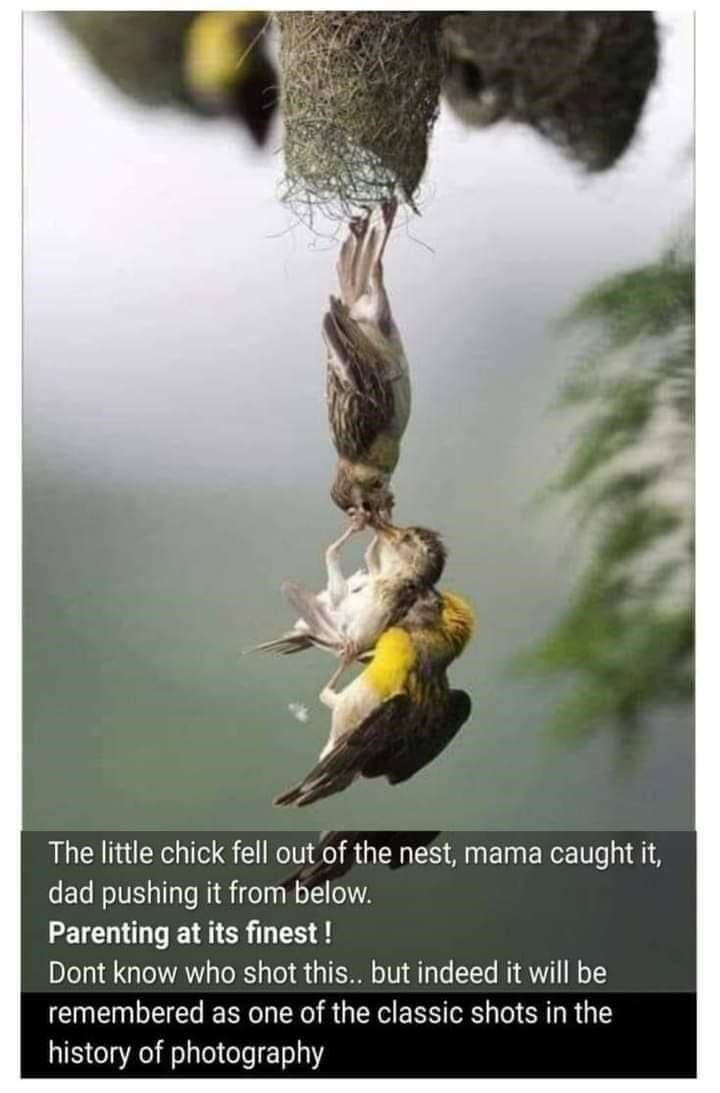 Via mariadmccormick
Repost
Recaption
Comments
I Can Has Cheezburger?
Favorite

Another week, another list of twitter animal shenanigans. Animal twitter always has so, so much to offer. People love animals, they can't help but tweet about them, and we're always happy to see the animals that people enjoy so much. It's a vast landscape - animal twitter - and we have learned to navigate it for you, finding the most talked about twitter animals of the week.

Weekly, we bring you the very best - the funny, the weird, the cute, all of it. From cats setting off atomic bombs, to mosquitos and flies conducting studies, and everything in between. With these tweets, you'll be able to get your week started the right way, with the kind of conversation-inspiring tweets that'll give you motivation to talk to people even if it's Monday and you're too tired to get up. 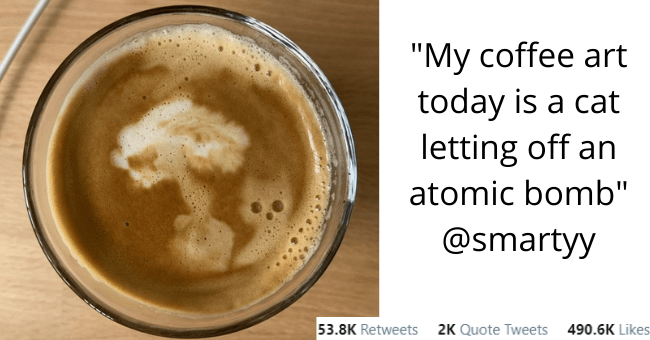 The guy who is kidnapped in the background: nervous laughs

In the mood for a good laugh? This video oughta do the trick! If you can laugh at this video without laughing... you may want to look into that. This bird's "evil" laugh so is darn funny and contagious, we couldn't help but let out a hearty laugh after hearing it!

There needs to be more laughter in this world, so thank you, little bird, for this glorious pick-me-up. 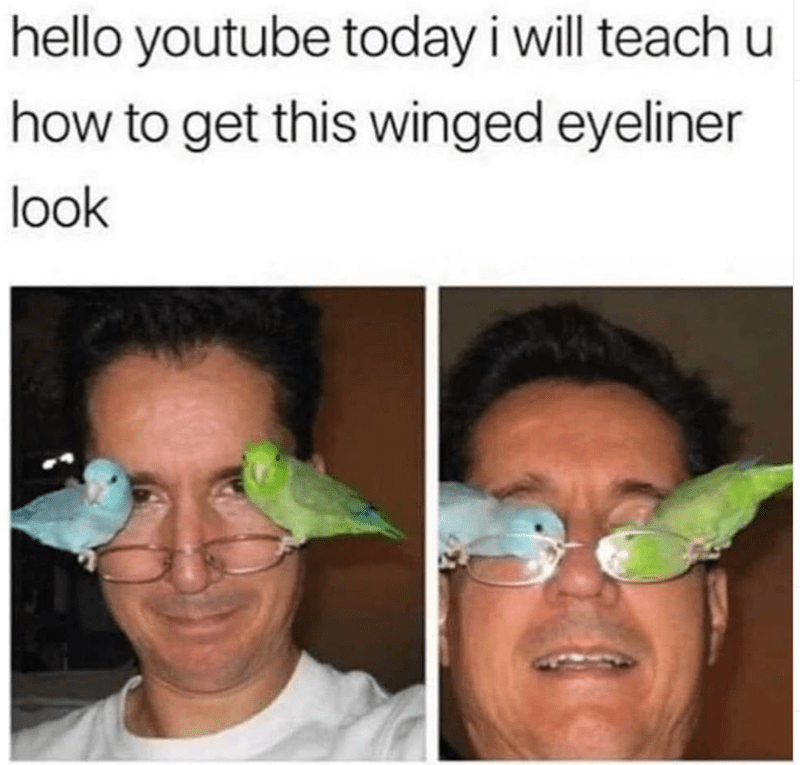 Via @birdymemes
Repost
Recaption
Comments
I Can Has Cheezburger?
Favorite

We don't quite know what to make of this special family but all we know is that we're obsessed and need more.

Bob and Marley are both golden retrievers with a huge Instagram following, and they also have a huge family. And when we say family, we don't mean a bunch of little golden pups running around. We mean a blended family, a family that consists of multiple birds, and a hamster. What's the most impressive thing about this unique family is their calm interaction with each other. So calm that their owner can line them us for incredible photographs like the images below. 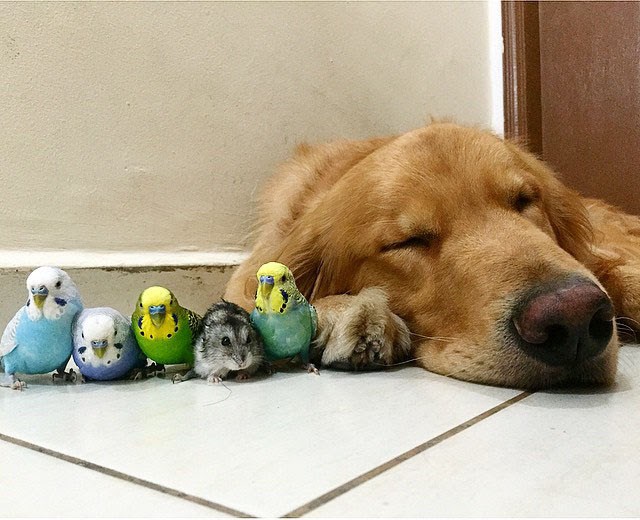 There are moments when you look at a picture and feel absolutely speechless. There's just so much in it, so many options, so many stories running through your head, so many feelings coming through that one image. Words are not enough to describe it, not even 1000 words.

Week by week, we bring you pictures like that. The kind of pictures that inspire - that bring about stories, that make your thoughts race, that make you want to show them to others and talk about it. These incredible pictures are not ones that we would ever be able to describe justly in anything less than 1000 words, some of them truly deserve novels of their own. And hey, maybe you'll be the one inspired enough to write a book about what exactly led those six adorable bunnies to have a secret conference, and it'll make you a worldwide best seller. Hopefully. 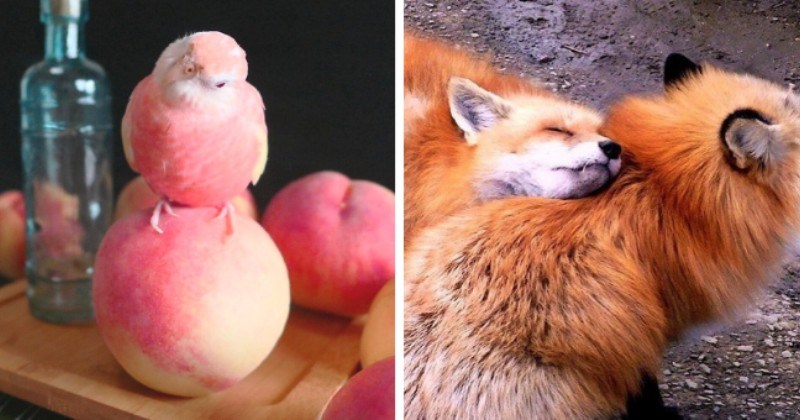 This is so incredibly sweet!

Mr. Pelican was first found on Chambers Island in Maroochydore, Queensland, constantly getting in trouble. He would get entangled in fishing lines, and would constantly need help. As Twinnies Pelican and Seabird Rescue, in Australia, continued to come to aid him, one day that came to find him missing a wing due to a severe injury, and was taken into Twinnies Sanctuary.

Since then, Mr. Pelican has found a partner and has been trying to have a baby. For six years, Mr. Pelican and his partner have been trying, they would dutifully watch and sit on their eggs, share the incubation period together, and no egg would ever hatch.

Until now. This past September, when a caretaker at Twinnies placed a fellow pelican's egg within Mr. Pelican's nest, and it hatched.

Twinnies stated on their Facebook page, "Mr. Percival has never given up trying to have a baby pelican chick. We felt so sorry for him as it's so sad when he's seen the others around him seeing baby pelicans. So we did this amazing thing for him as we wanted to make him really happy this time."

Story via the dodo 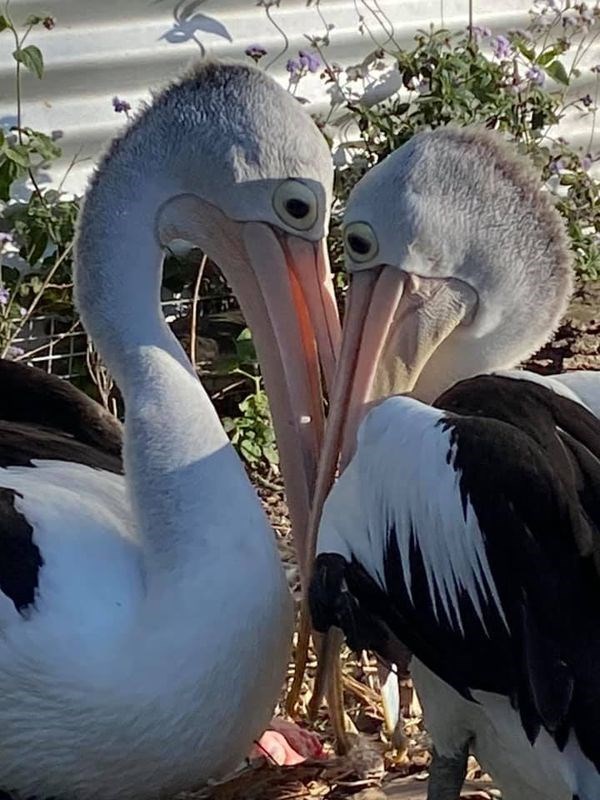