Griffin and Haru, French Bulldogs react to their human pranks them by getting home from work and going straight to sleep. These cuties are NOT HAVING IT. "We are two French Bulldogs Griffin and Haru, we love to eat healthy food and show off our cute personalities. Haru loves to sing and do a trust fall. Griffin is the instigator when it comes to tantrums and is a very clever boy." Via YouTube.

Dad comes home and doggos are in full on play mode. Walk time!! Let's goooo. Dad, on the other hand, has very different plans. He enters, almost completely ignores the doggos, heads to the couch, and tucks himself on in. The confusion then commences. These doggos do just about everything to get their dad up and on the move, but he is persistent! check it out!

You would think that after such a long time in lockdown, our pets would finally get used to us staring at the computer screen all the time and occasionally talking to it. But this awwdorable French bulldog is the ultimate proof that they have not. It's obvious that this pupper is confused by the idea of this light box somehow being more interesting than her, and we can't blame her.

Animals and Zoom calls are always the funniest mix. Who could ever forget the viral twitter thread about cats sitting in on Zoom calls? Iconic. This may be one of the only things that we actually liked about lockdowns. Well, that and the fact that we got to cuddle our doggos all day every day for as long as we wanted to.

We all have that one piece from our wardrobe that simply makes us feel like ourselves. It might be a belt, a necklace, a funky sock. Without these items, we can practically feel naked. For this fabulous french-bulldog puppy, @Fridathefabfrenchie_, it is indubitably her signature bucket hat. You can try, but you won't catch this paw-dorable pup without an on-trend hat. It's who she is, and it's so adorable, I might just explode.

Frida's human, @Jorwow, and manager, @lillianjaneo, say that she loves to rock all kinds of brands from Fila to Gucci, to Chanel. I don't know about you but I see a sponsorship in her future! 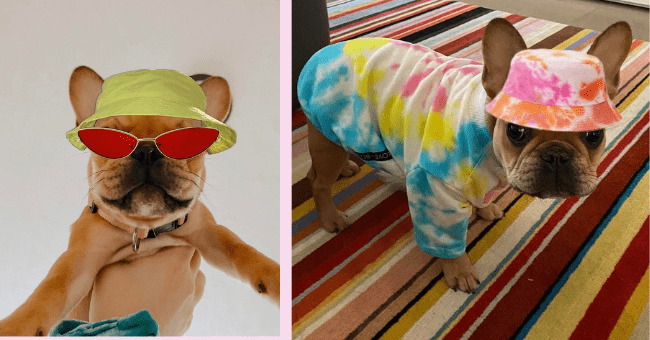 Adorable French Bulldogs Who Might Inspire You To Move To France

Oui, French bulldogs are from Paris (pronounced Pah-ree if you're doing it right). Okay, so I'm lying. French bulldogs actually originated in England, but they seem so much more french to me. They're so cute I could see these dogs donning a beret and munching on croissants, can't you? Just me? Okay then. Nonetheless, enjoy this cute collection of wonderful Frenchies below. 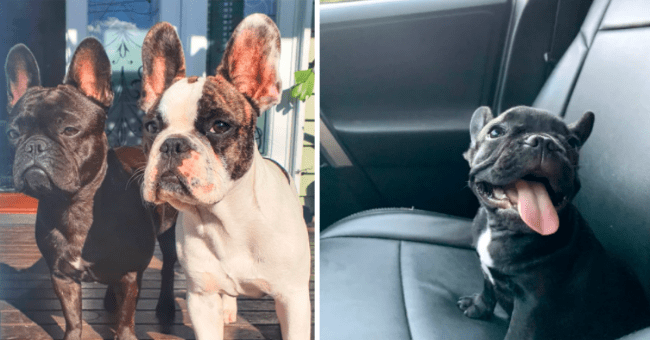 As much as we've integrated them into our lives, dogs still are animals. And animals have different instincts than humans. When dogs see a muddy puddle, it only exists for one purpose: to play in. And these dogs were lucky enough to wallow and frolick in the mud like little piggies, much to their joy. I wouldn't want to be the one cleaning them afterwards, though! For more dog photos, have a look at these gorgeous German Shepherds. 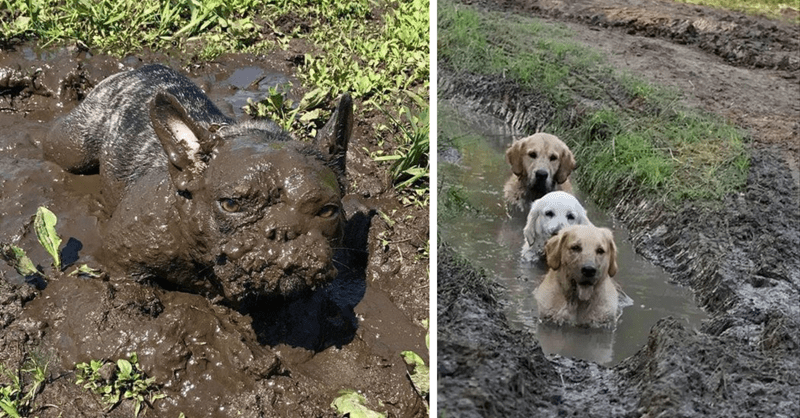 Is there anything better than lying in bed, wrapped up in your blanket and cocooned away from the rest of the world? We think not, especially after a long and exhausting day of existing. If you can relate to these feelings, have a look at the memes below that perfectly summarize those feels of wanting to hermit away from the world forever - but with dogs. Because dogs doing human things is adorable. Enjoy these memes then go and wrap yourself up in bed. If you're after some more adorable memes, have a look at these teeny hamsters doing human things. 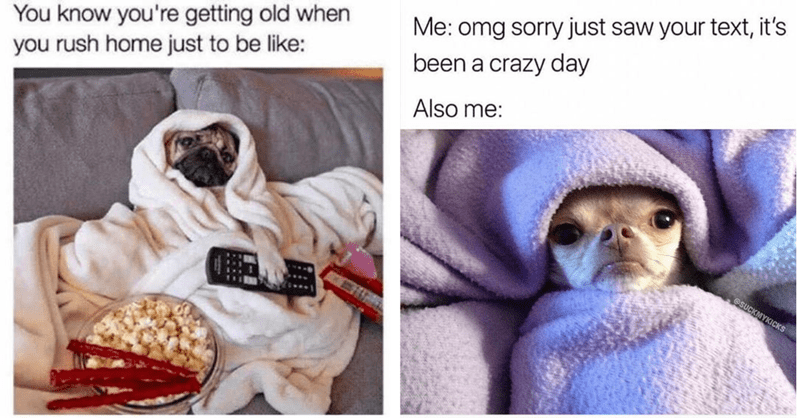 Over the weekend, news broke out that Lady Gaga's two French Bulldogs, Koji and Gustav, were taken in Hollywood. And it makes the story even more horrific, the man who stole the dogs, also shot the trusted dog walker, Ryan Fischer.

Thankfully, this awful story has a happy ending, Lady Gaga's dogs were returned to her and Ryan Fischer is set to make a full recovery.

In a statement obtained by Rolling Stone, the Fischer family said, "Thankfully, Ryan is receiving extraordinary care in the hospital right now and his doctors expect him to make a full recovery. We cannot possibly say enough to thank all of the first responders, nurses, and doctors who have worked so tirelessly to care for Ryan. Of course, we also want to thank Lady Gaga who has shown nothing but non-stop love and concern for Ryan and our family right from the outset. Ryan loves Gustavo and Koji as much as Lady Gaga does; so we join in her plea for their safe return."

The scene plays out like this, Fischer was walking the French bulldogs as a car pulled up beside him, demanding he hand over the dogs. All three of Lady Gaga's dogs were initially taken, however, one dog named Miss Asia managed to escape and was soon recovered safely afterward. The male suspect then shot Fischer with a semi-automatic handgun and quickly fled the scene in a white sedan. Heartbroken, Lady Gaga offers half a million dollars as a reward for her dogs to be returned.

As luck would have it, a woman walked into the LAPD's Olympic Community Police Station, with Koji and Gustav. Police say the woman appeared to be "uninvolved and unassociated" with the armed robbery. It's unclear how the dogs came to be in her care, but we're just happy the pups have been located, safe, and are now back home with their rightful owner.

To all those with dog breeds out there, we encourage you to be careful as dog-napping seems to be occurring more often. If you're planning on getting a dog, perhaps consider adopting instead? Just another reason why a rescued mutt might be a better choice! 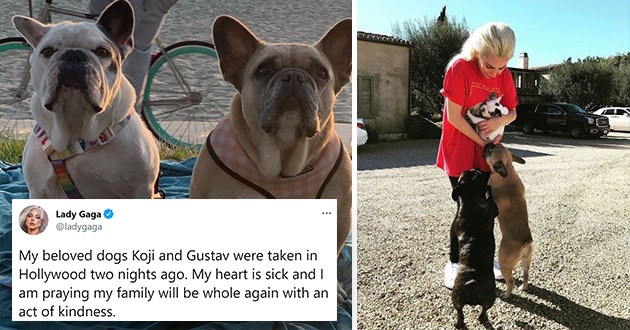 In late August, fifteen French bulldog puppies were rescued from a O'Hare International Airport warehouse after being neglected. A few days ago, after an effort of over one hundred thousand people, including the rescuers, a congressman, and about 120,000 people who have signed a petition, these puppies were given a reprieve and are able to stay in the US permanently in the hands of their rescuers. 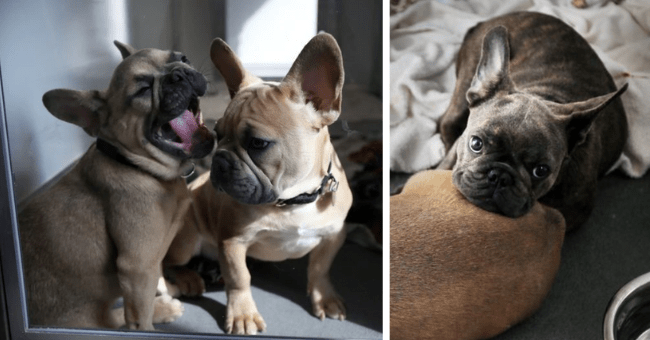 We Rate Dogs is still at it! Warming cold hearts since they first joined Twitter back in 2015!

They recently posted about an adorable French Bulldog named Mochi and his new garden friend that charmed the socks off many users! Users then shared images of their pups with a garden friend, or dressed up as one! 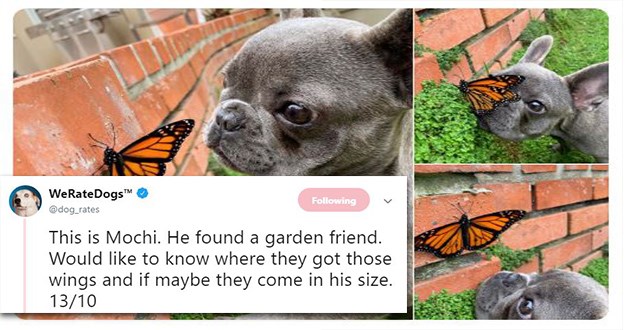 Brenden Boggs, a professional photographer who takes gorgeous pictures of newborns and expecting pics, recently took on a new project. A newborn photoshoot of Olive, the Frenchie pup! To see more of Brenden Boggs work, check out So Cute Photos! And you can also follow the adorable Olive on Instagram. 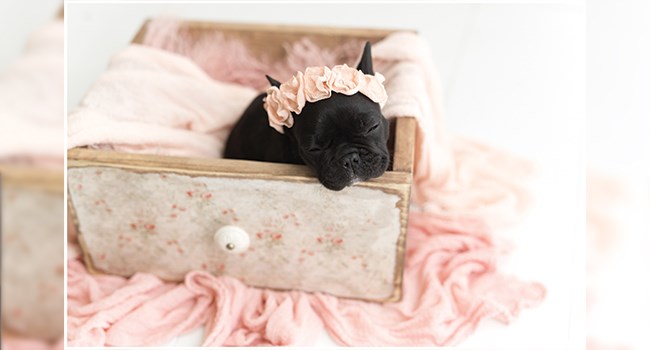 Via Bosunthefrenchie
Repost
Recaption
Comments
Advertisement
I Can Has Cheezburger?
Favorite

Just when we thought we've seen it all, we realize there's still so much crazy-ness cool things out there! Just like when Taryn Arnold (@Thetarynarnold) reminded basically every one of the times Bulldogs skated! 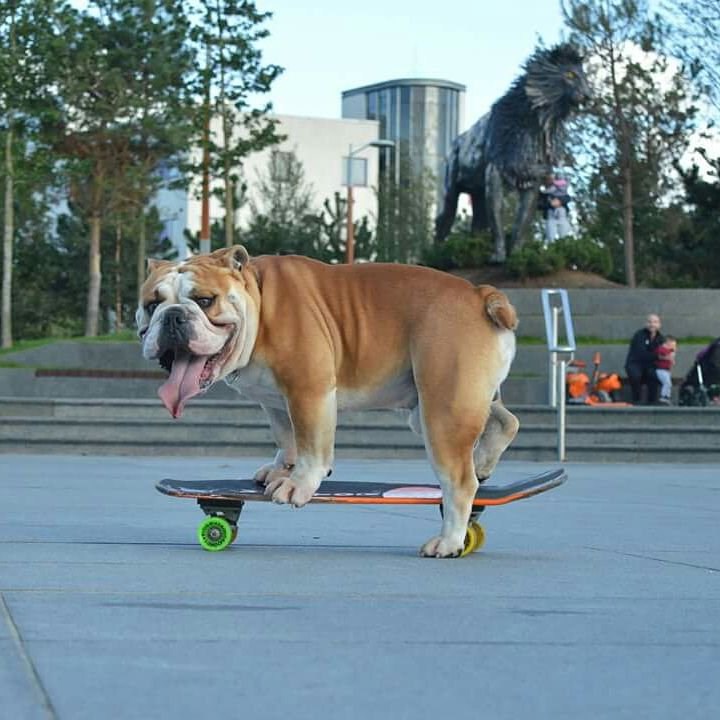 JetBlue Airlines crew members, Renaud Asher and Diane Asher, are being credited with saving Darcy the french bulldog, who became ill last week during a flight from Florida to Massachusetts. In a frightening turn of events, Darcy's owners, Michele and Stephen Burt, noticed that their dog was having trouble breathing. The two flight attendants acted quickly and provided ice, water and an oxygen mask for the distressed pup. 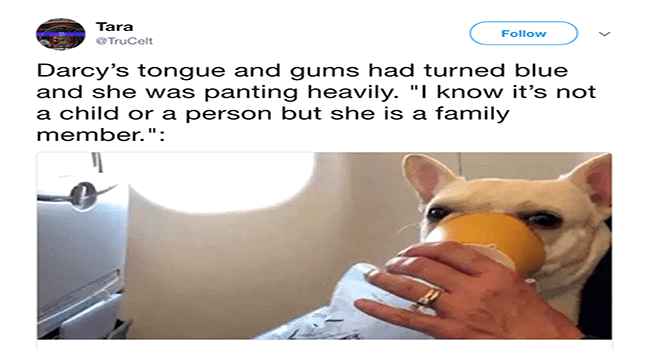 This French Bulldog is Obsessed With Food

Just a Pup Noming on Some Strawberries

Via LindaDee
Repost
Recaption
Comments
I Can Has Cheezburger?
Favorite