When finding some living creatures in fruits or vegetables purchased at the grocery store, most people would probably just ask for a refund.

But British media personality, Sam Darlaston, had some other plans for the caterpillars he has found inside the broccoli he bought from a local Tesco store.

After overcoming the first shock, he realized he had a new pet to enjoy during the lockdown.

So, he decided to raise those caterpillars into butterflies and documented the whole process in an awesome twitter thread. 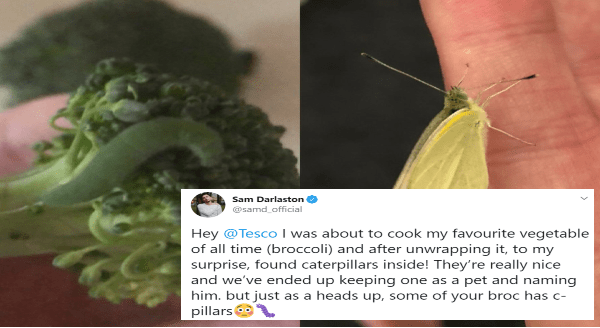 Rebellious Cat Welcomed Back To Supermarket After Negative Backlash

Say hello to Pumpkin! Pumpkin, a ginger cat, is a rescue who loves to spend time in the Tesco store in Norwich, U.K..

The staff at the Tesco store thought Pumpkin to be a "pain" and thus banned the cat from entering the store. Luckily, there's so many of us cat lovers out there and backlash to Tesco banning Pumpkin resulted in threats to boycott the store.

Needless to say, Pumpkin's ban has since been lifted. And quite honestly, the sole reason we'd like to visit this Tesco is to hang out with the Legendary Pumpkin.