Whenever we hear about the shenanigans that people have with their pet birds, as people who've never had birds for pets, we always have a bit of a hard time understanding. It seems… almost impossible for these birds to have so much personality, let alone for them to be jerks. And yet… we've heard of a parrot purposefully messing with a dog, we've heard of parrots behaving like absolute jerks. We've even heard of a peacock acting like a jerk.

But now, we think we've come across the ultimate species of bird jerks - the African grey parrot. We came across tumblr thread with stories that are so hilariously insane about them, we simply had to share it with all of you guys. Don't forget though, after reading all of these jerk-bird stories, that birds can be totally adorable too. 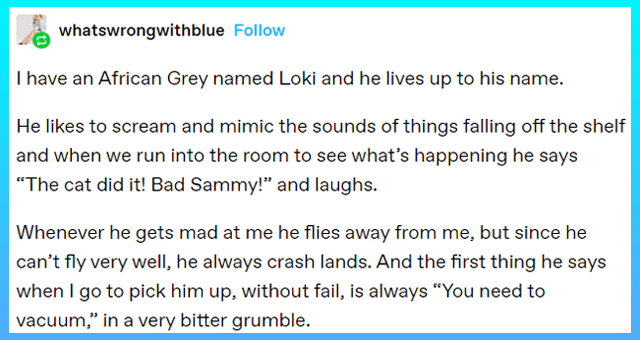 Cat vs. water - a story as old as time. Unfortunately, as much as we don't want to bathe our cats, sometimes, things happen and bath time becomes necessary. It's not fun for anyone involved, kitty, we assure you.

This time though, there's a new development. Cats are getting smarter and smarter by the day, and this cat has figured out that water coming out of a faucet is indeed beatable - you just need to turn the heckin' water off. Smart kitty cat, we can't even be mad. It's a cat to take example from. If it figured out how to beat its number 1 enemy, so can we.

Cockatoo Mimics Cats Around Him (Video)

When you have poor social skills but try to make friends anyway. This cockatoo just wants to fit into the cool cat crew that he's living with! Not only does the cockatoo meow at the cats, when one cat got too close, you can also hear the bird hiss at it. True feline language has been mastered by this smart birdie! If those cats were confused as to why this other weird-looking "cat" was meowing at them, that hiss would've solidified him being one of them.

Good job, Sir Cockatoo, we are thoroughly impressed by your dedication to infiltrate the feline crew.

Sometimes, you have a pet that almost seems like they were a human in their past lives due to the seer amount of sass they bring into your life. Seriously, you ever meet an animal that was sort of scary-smart and had the emotional palette of a human? We sure have.

That's how we feel when we come across such spicy and sassy pets! Pets who have no problem whatsoever conveying how they feel, and do so clearly enough for us to understand them.

Truly, it's a special gift. To all the clever sassy pets out there -- this one is for you! 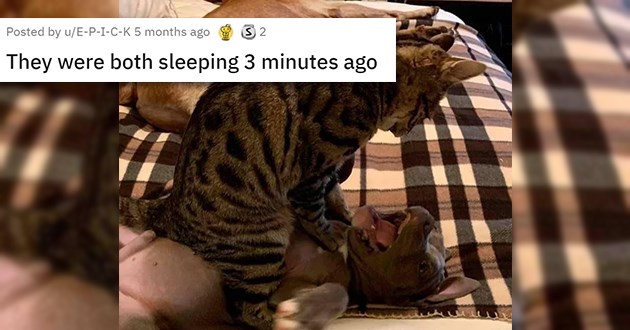 Pets can be freakishly smart, to the point that makes you stop and think, "were you a human in a past life?" Other pets... maybe not so much. Some cats can even open up closed doors by jumping up and pressing down the door handle!

Or how about those cats who can actually take care of their business in a toilet and flush afterward? Crazy! We've heard stories of cats and dogs who have saved lives before, and now it's time to hear stories from our lovely users!

What's the smartest thing you've ever seen YOUR pet do? Share your stories in the comments and don't forget to follow I Can Has Cheezburger on Facebook to join the next challenge! 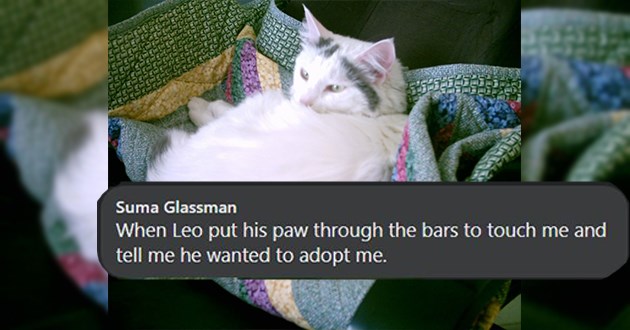 There's just no denying it, cats are smart. We've seen a variety of different animals react to a treadmill but they always seem the quickest to pick up on how to use it.

Indy, the cat, is at first scared of the machinery (totally understandable) but quickly gets over his fear and soon enough -- masters the treadmill!

Cats may be called "scared cats" often, but they can also be quite fearless.

That is one clever stray!

In the streets of Mexico, this cat had started following customers in the hopes that someone would buy him some cat food. Then, one day, his life of asking for cat food would come to an end.

Primary school teacher, Tania Lizbeth Santos Coy Tova, saw the cat from across the street, and soon enough, the stray was following her. The clever stray then led Tania into a shop nearby, walked straight up to the feed food aisle, and actually pointed to the bag of food he wanted.

Tania was surprised and in awe! Honestly, who wouldn't be?

So she decided to stalk his home and discovered he was living in an abandoned home. It was then that Tania decided to adopt him. 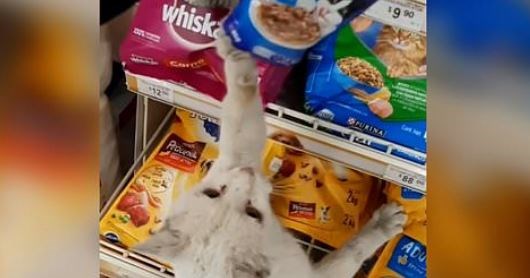 Adorable Dolphin Brings Humans Gifts From The Bottom Of The Ocean

That's it, we're moving down to Australia so we can hang out with Mystique, the humpback dolphin from Tin Can Bay on Queensland's Cooloola Coast.

Mystique is a unique pod who had recently developed quite a unique quirk -- a habit of bringing volunteers at the Barnacles Café and Dolphin Feeding centre an array of items each day! Apparently, this unusual habit began during the coronavirus pandemic while the tourists were staying home.

Mystique is a 29-year-old male dolphin who has often displayed giving behavior but not to this extent.  Dolphin feeding volunteer Lyn McPherson said, "One male dolphin brings in objects on his rostrum, or beak, and then he carefully presents them to us."

She says they reward him with some fish, "We haven't trained him, but he has trained us to do this."He gets under it [and] if he drops it too far out, or we say 'come on, that's not good enough', then he gets underneath it and brings it to us."The items have included bottles, big bits of timber, shells, and wood, which are brought in on his beak."We swear he has a collection waiting to bring to us," Ms McPherson said.

Since we've been closed to the public he has been doing it more and more. Sometimes he will bring 10, one at a time, and he will line them up as he has to get fish." 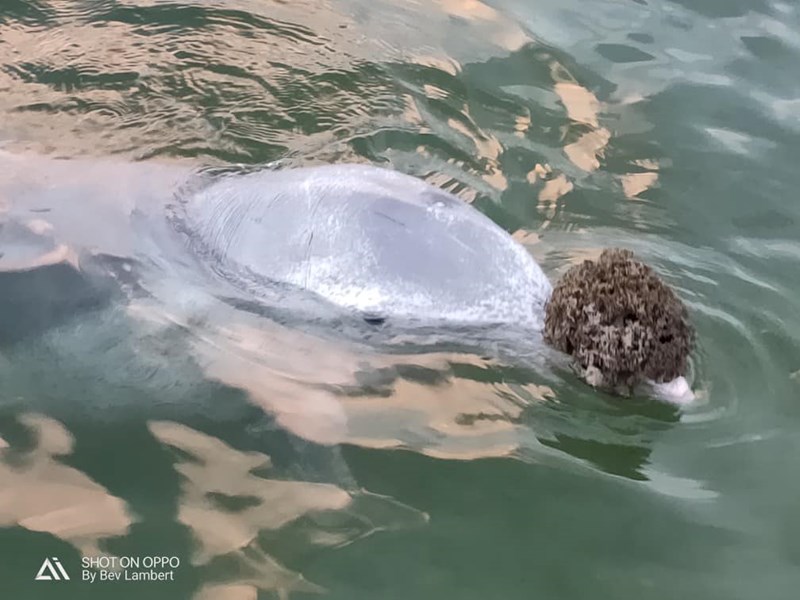 One man, Kendall Diwisch of Drayton Valley, Alberta, Canada, is being praised as a hero!

Diwisch came across three abandoned kittens that were frozen to the ground, thinking on his feet, Diwish quickly returns to his truck, brings back warm coffee, and pours the fluid onto the stuck felines. Essentially, thawing them out.

He posted on Facebook, "So today I found these three fellows on one of the back roads near one of my wells. Most likely dropped off. Poor things were frozen into the ice so they had to have been there all night. All three little rascals went to their new home today where they get to be together instead of separating them. All three are eating and drinking and very energetic. Thanks for everyone's consideration and offering to take them very appreciated."

After the incident, Diwisch took the poor little kittens back to his home where he gave him food and water, and of course, a warm shelter.

In his Facebook post, he added: "All three little rascals went to their new home today where they get to be together instead of separating them. All three are eating and drinking and very energetic. Thanks for everyone's consideration and offering to take them very appreciated."

A million thanks to Mr Diwisch! Thank you for your kind and loving generosity for these kittens! 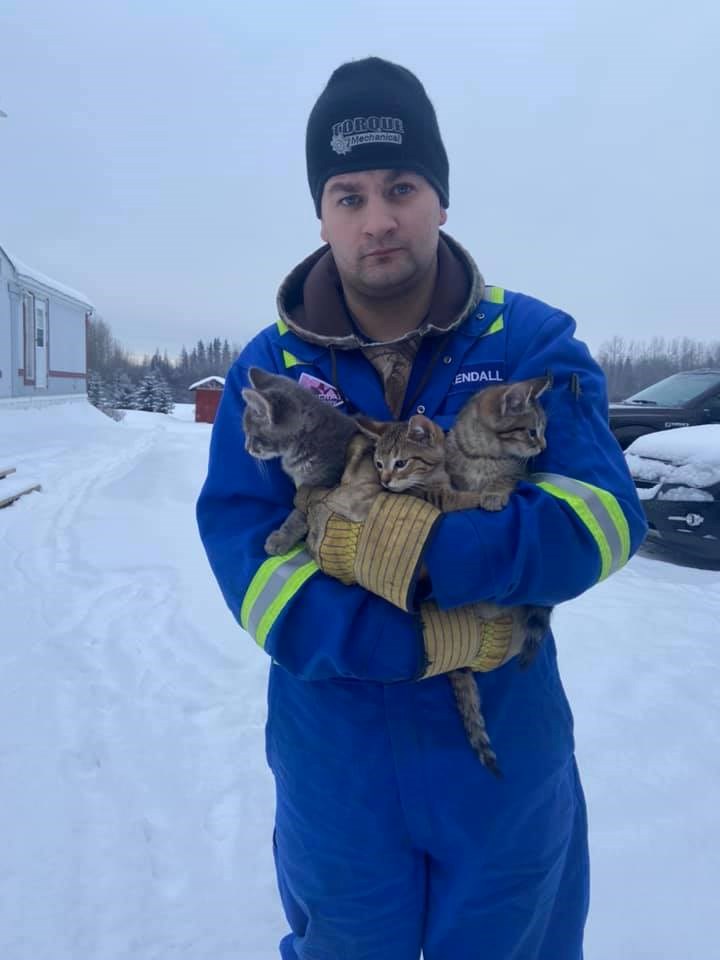 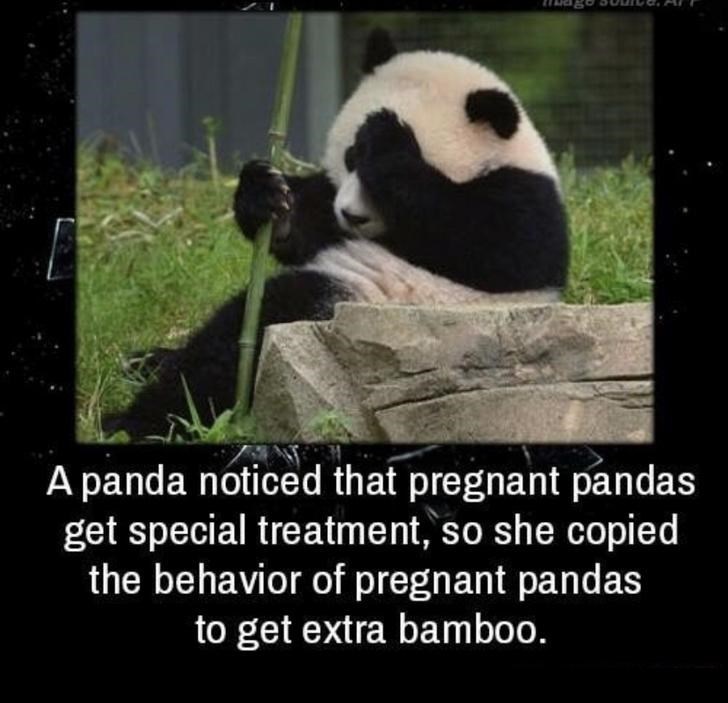 Via jesssoccer000
Repost
Recaption
Comments
I Can Has Cheezburger?
Favorite 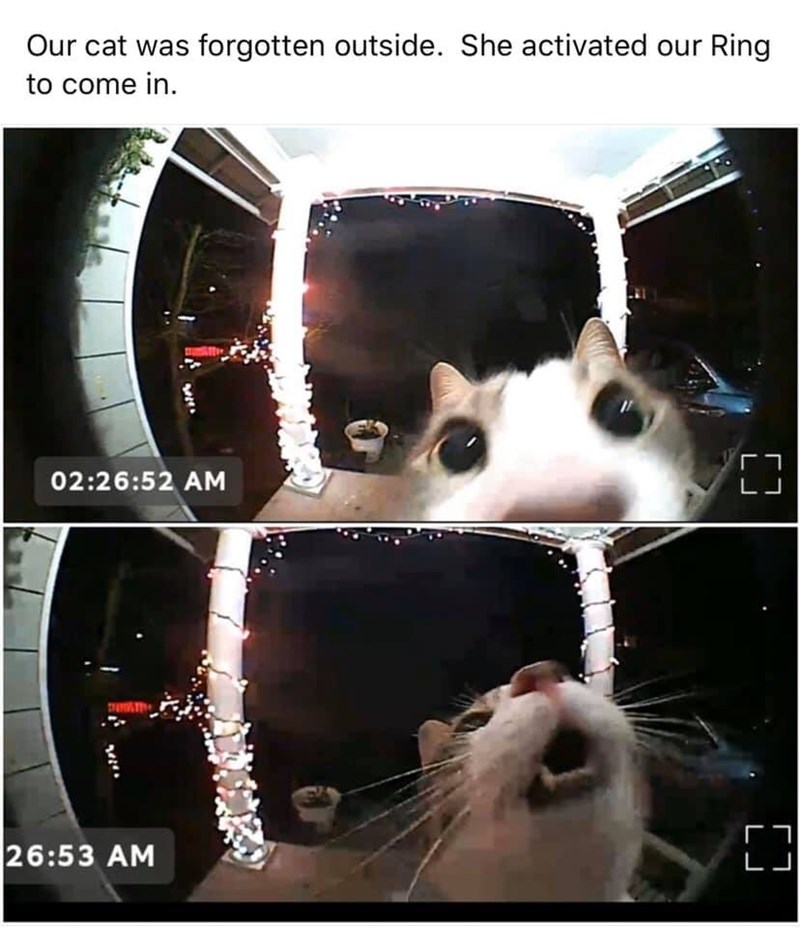 Via BruceLehmann8
Repost
Recaption
Comments
Advertisement
I Can Has Cheezburger?
Favorite

Meet Ebo, The Smart Robot Companion for Your Cat

Next-generation is here: With Ebo as a real-life companion, your cat will never spend another day bored or alone. 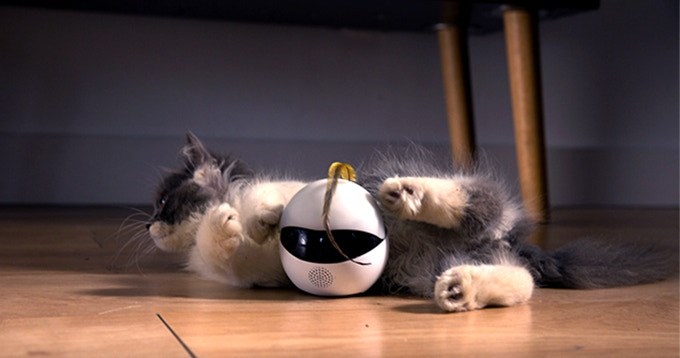 Smart Monkey, Sharpens A Rock And Uses It To Crack Its Zoo Enclosure

And it was all caught on video! Visitors at the Zhengzhou Zoo, in Central China, were there to witness a shattering moment of triumph, all at the hands of one clever little monkey.

Perhaps 'Planet of the Apes' is closer to reality than we thought? 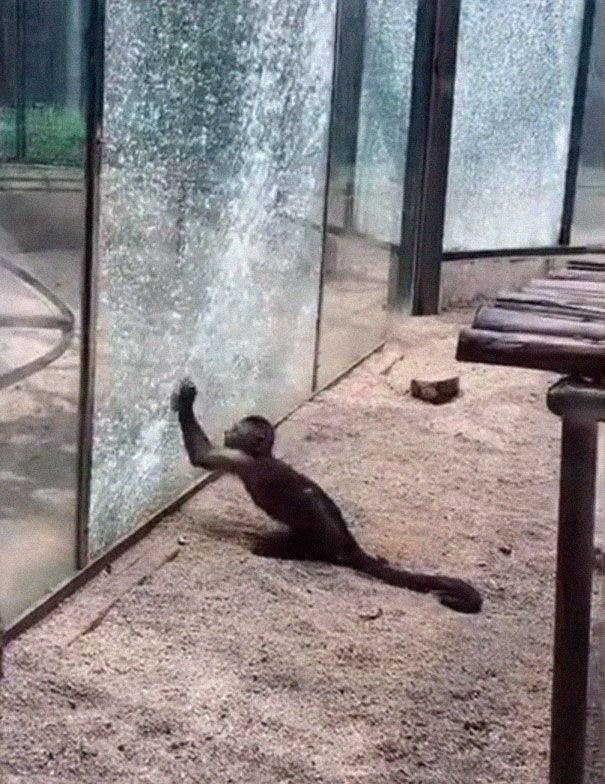 How many of us wash our clothes by hand? Scratch that - how many of us have ever washed our clothes by hand? I'm betting that the answer is close to zero (especially if you're a millennial). Judging by the fact that you're reading this now, you've probably got access to utilities more necessary than the internet, i.e. a washing machine. So what's the big deal? The big deal is that there's a monkey in India that can wash clothes way better than you can. And monkeys don't even wear clothes (well, not naturally). How does that make you feel? 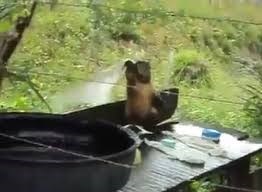 12 Images Of These Intelligent Gentle Giants For World Elephant Day!

Today is 'World Elephant Day'! In honor of the occasion, we've gathered a few images and a lovely video of the beautiful and intelligent creatures!

If you love elephants and want to do something special for them today, check out World Elephant Day, to find out how you can help! 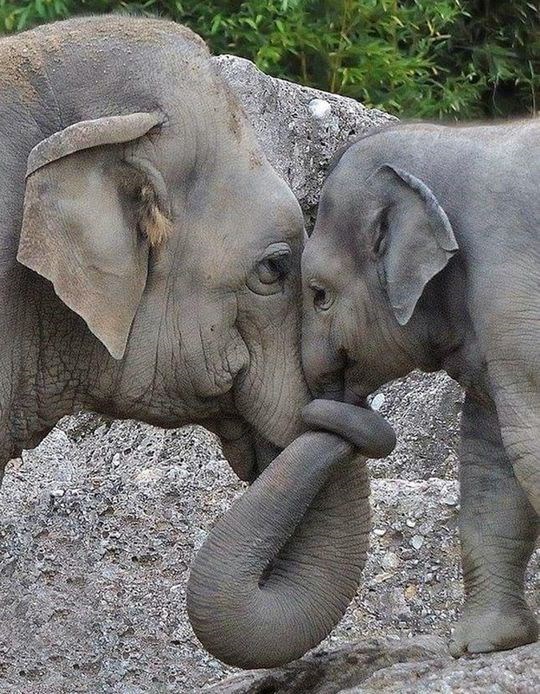 @DogSolutions is the twitter page you need in your life right now. Described as bringing you gluten-free dog solutions, you can be assured you will receive the highest quality solution for your everyday problems. 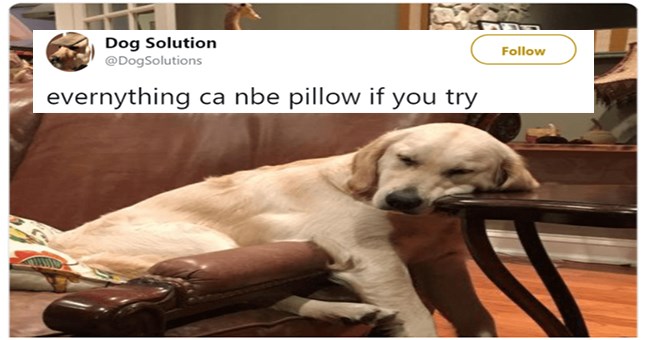