Deep Diving With Some Shark Facts

It's the beginning of Spooktober and what's spookier than creatures of the deep sea? So much is unknown and the information we do know can be just as scary as the unknown!

Sharks. If someone tells you, while in shark-infested waters, that they aren't afraid of sharks... they're definitely lying to you. Sharks are terrifying! Yes, they're also amazing and very important to the balance of the ecosystem but that doesn't change the fact that they are essentially dinosaurs. They've got this haunting movement and look, those black eyes... and all those teeth!

As part of our Spooktober special, we bring to you 25 shark facts that are pretty unnerving. Enjoy! 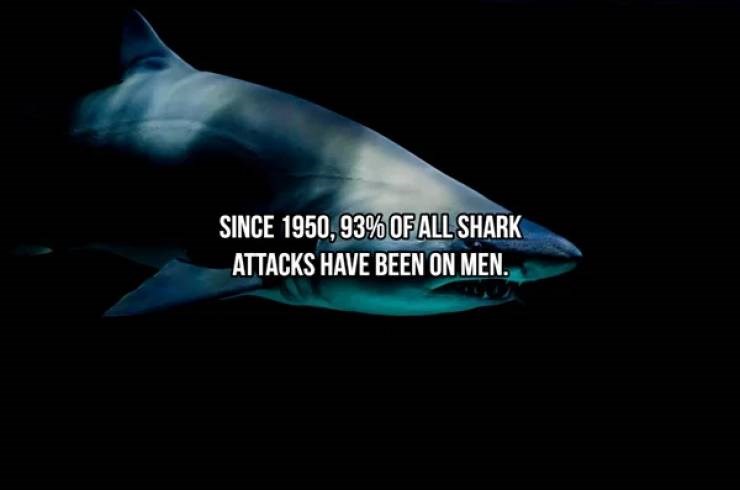 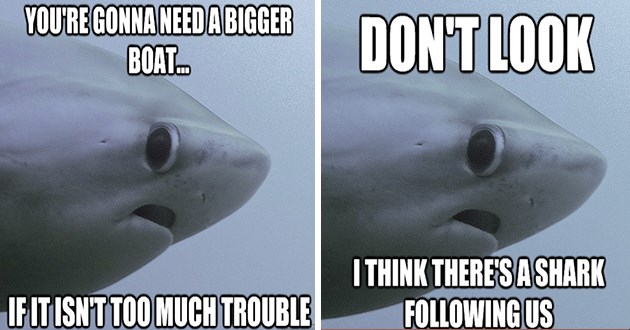 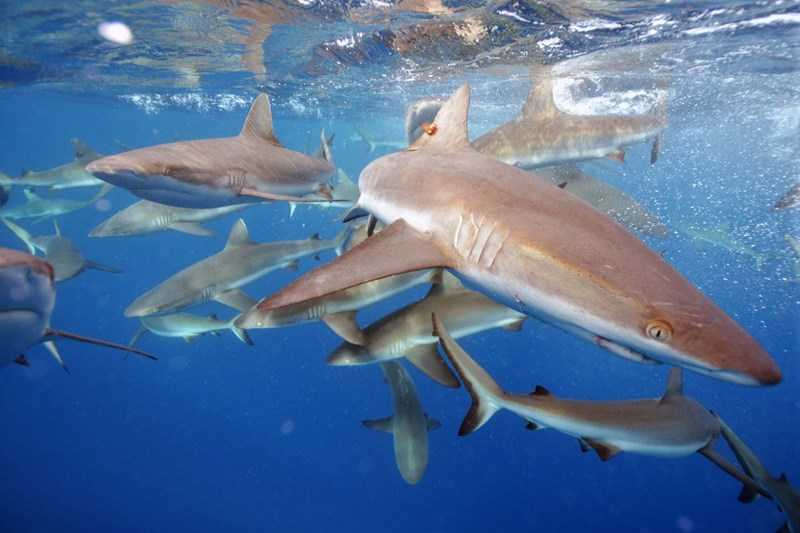 Daily Snarky Conversations Between Sharks And Other Sea Creatures (Comics)

On this day, we all acknowledge the sad fact that these magnificent creatures are more threatened by people than we are by sharks. The worldwide demand for shark-fin soup, shark-tooth medallions, and a false sense of security on beaches everywhere, all combine to leave sharks persecuted and endangered, with millions of them being killed each year.

Whilst no-one is suggesting we go out and hug a Great White on this day, it's the least we can do to respect these wonderful creatures and let them be.

The Life of Sharks is a webcomic that features real facts about sharks along with witty humor, created by Christian Talbot (the writer) and Sophie Hodge (the illustrator). The talented duo is expert in putting funny words into the mouths of these fish that are perceived to be cold-hearted killers but are discovered here as cool and funny. We thought it's a great way to appreciate sharks. 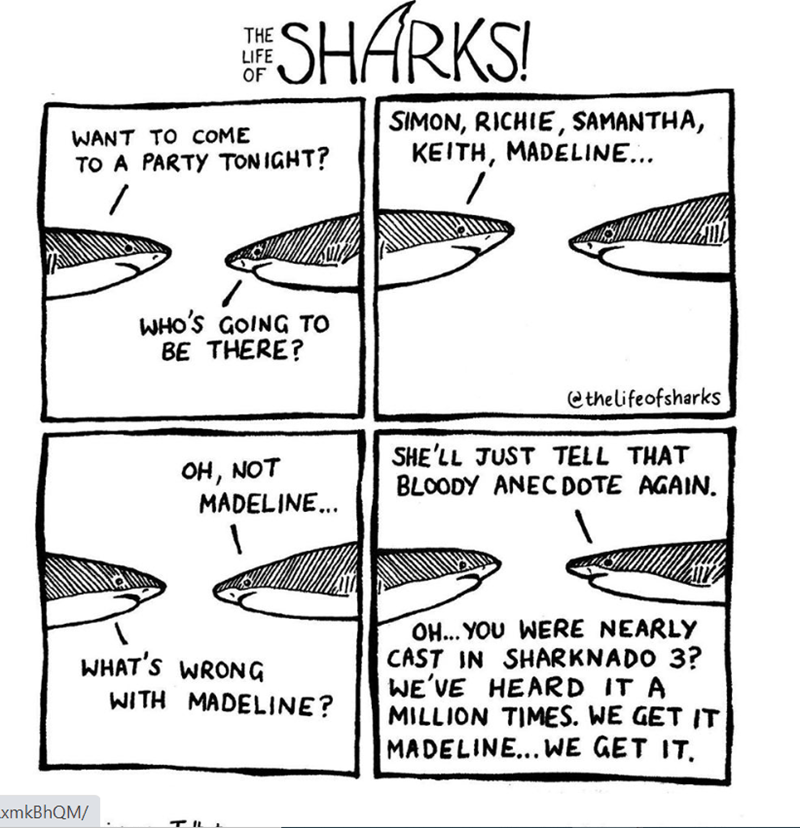 The whole 'reimagined Disney Princesses' is extremely overdone to the point of exhaustion. You say to yourself, there's no way they can be reimagined into something remotely interesting anymore. But if there's a will, there's a way!

Introducing "Shark Cats" by the talented Brynn Metheney!  "It was a normal day when I grabbed my sketchpad and began to doodle. What came out were scribbles of a horrible little creature: the Shark Cat. The initial design was based on the thresher shark. I found that the short face and extremely large eyes worked well with the "cat aesthetic". Shark Cats have been featured all over the internet and continue to bring joy and terror to those who stumble across them. " 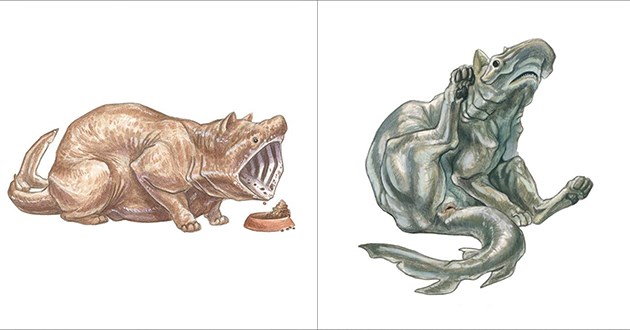 Created by the brilliant Christian Talbot and illustrated by the talented Sophie Hodge, "The Life of Sharks" is the best sea-life comic we've come across!

Seriously. Not only are these comics really funny, but a lot of them are relevant to events happening in this day and age and done in such a clever and fantastic way.

And for all the hardcore shark fans out there -- there's an online shop with hilarious shirts and mugs! 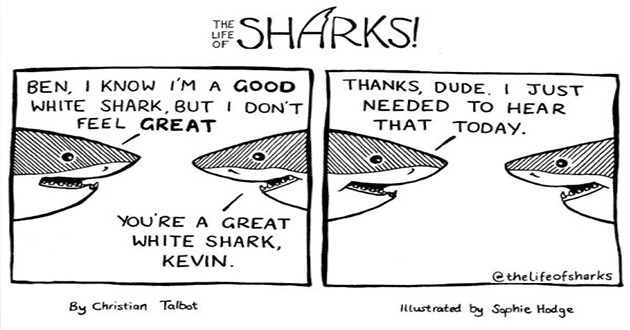 A shark was recently discovered in the Arctic Ocean. Not just any regular shark, oh no, this shark discovered was found to be 392-years-old.

Let's think about that for a second.

And while researching this shark, it turns out ANOTHER shark was discovered in 2019, in the Northern Atlantic, that scientists have reason to believe it was born as early as 1505. That means, this Greenland shark was born before Shakespeare and is -- wait for it -- FIVE-HUNDRED AND TWELVE years old!

The Greenland shark could very well be the world oldest living vertebrate. But we're here to talk about the 392-year-old shark that caused the follow entertaining Twitter thread.

All we can take away from this is that sharks are still terrifying but kinda sorta incredible... don't you think? 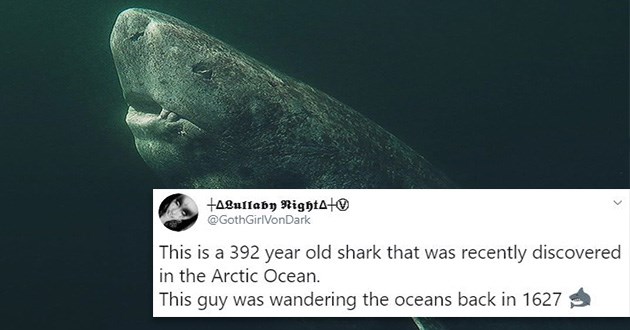 IKEA Plush Shark Placed In Human-Like Situations Is Back

Perhaps you can recall the popular Blåhaj (Blaha), the shark plush, IKEA had been selling a year ago or so?

And it wasn't until a fan-made petition pushing for it's return -- that the Blåhaj plush was officially relaunched and back at IKEA! And with its return came the countless social media posts! There has even been separate Instagram accounts created for the popular shark plushy.

The whole fun behind this plush, is going to IKEA and finding the hiding sharks in human-like situations. There's even a given map at the entrance on where you can find the sharks (and baby sharks).

After seeing these pics, we're eager to join the scavenger hunt! Look out, IKEA! We're coming! 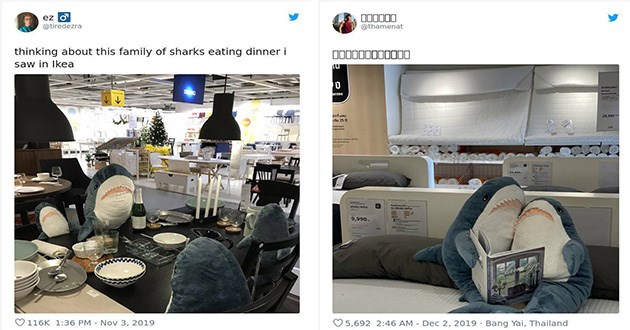 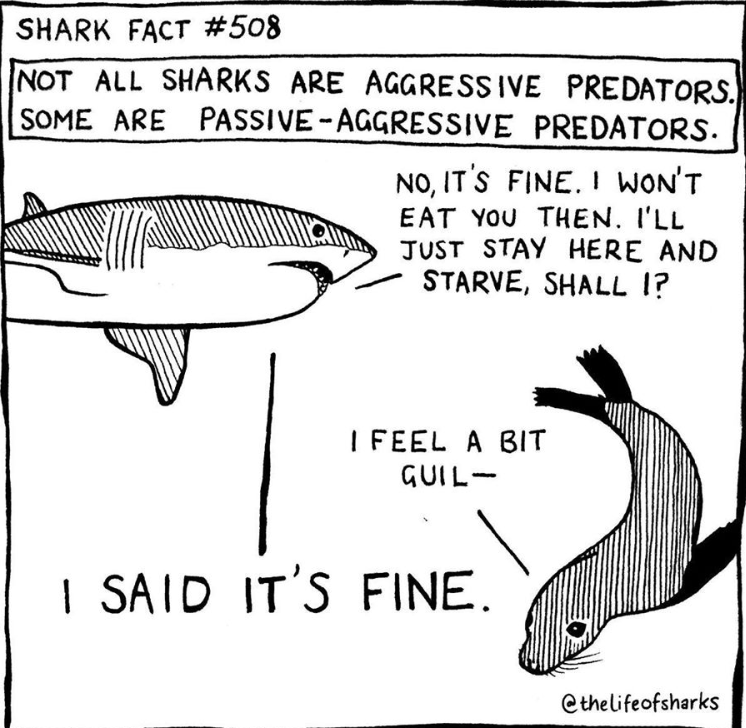 Juan Oliphant is a multi-talented photographer and ocean diver based in Haleiwa, Hawaii, United States. Juan focuses mainly on the ocean and underwater photography. He is also co-owner of One Ocean Diving and co-founder of Water Inspired Conservation Group. On his home page, he explains: "Photography is a tool, its the way I can speak up for them, a photo is worth more than a thousand words in every language, I try to capture as much feeling and evoke as much emotion as I try to evoke people to ask questions. I want to capture and share moments that start a conversation about the animals and the connection and relationship we have with them. I use my time, talents, and work around the world to help change people's fear of sharks into fascination and respect. I hope my images inspire you to take another look, questions perceptions, and join me to be the change to help save sharks and the ocean." For more, check out his beautiful instagram page. 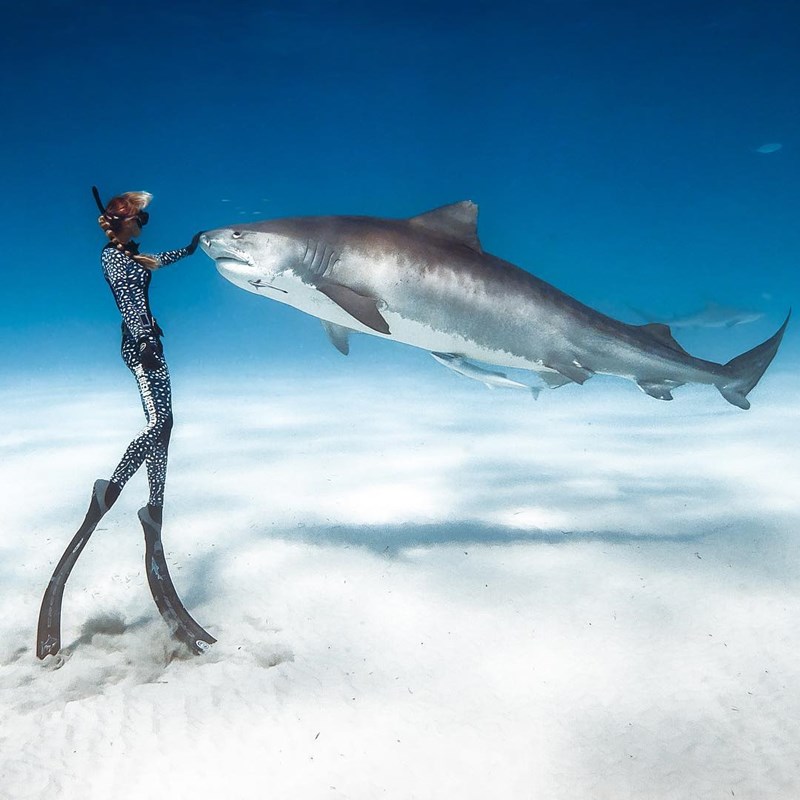 Who Would Have Guessed Shark's Daily Life Is Sooo Funny (Comics)

For more of these brilliant comic strips, visit The real life of sharks page on tumblr. 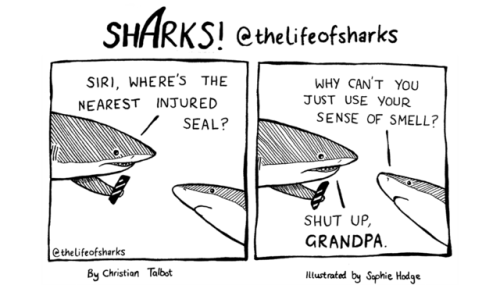 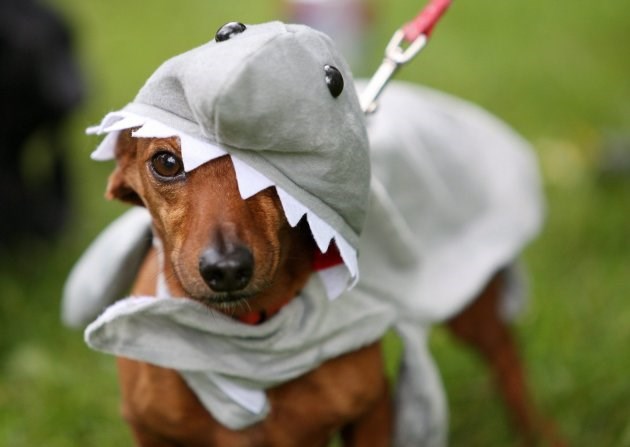 The Secret Life Of Sharks Hilariously Described In These Awesome Comics

We definitely think sharks deserve more than a week...Check out this great tumblr page By Christian Talbot &  Sophie Hodge. 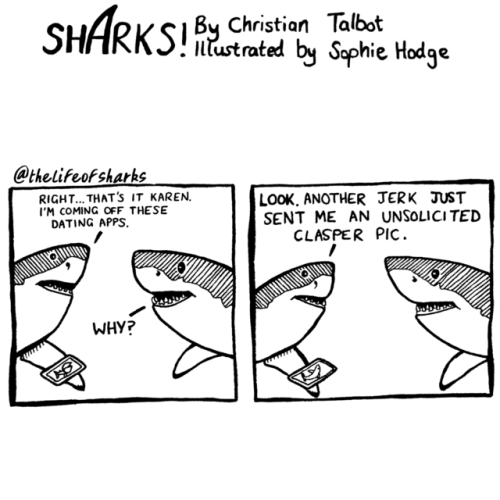 For more adorable little comics, make sure to check up Vress here 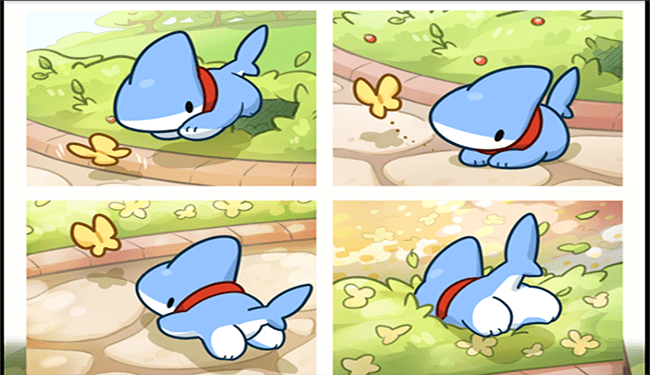 Movie Posters Get Makeover With Sharks

Hmm, we wonder how these movies would be? 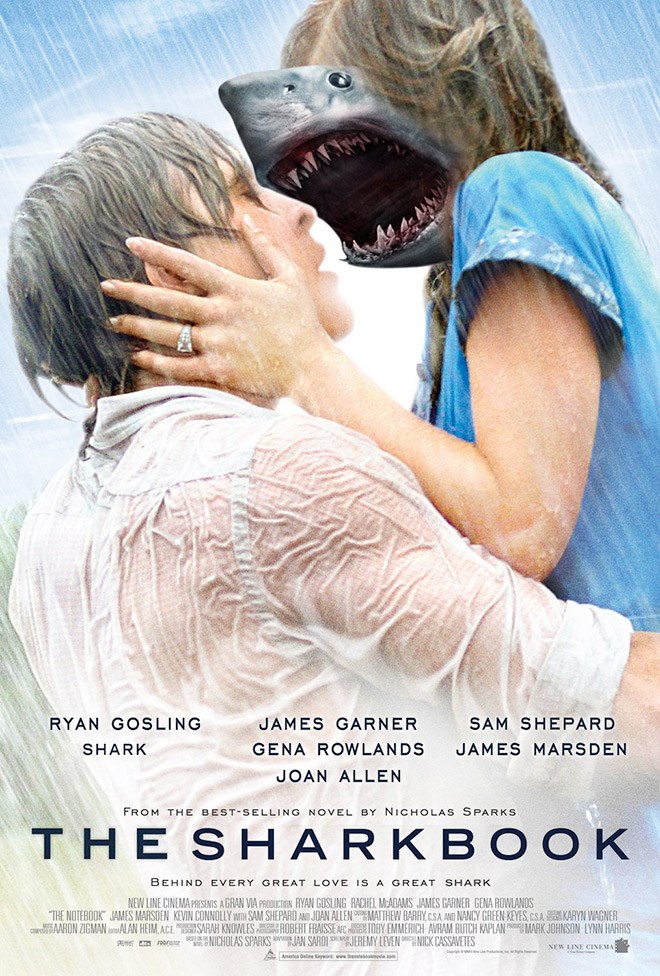 There is really no way of avoiding memes online these days. They've become the predominant form of mass communication, they are THE way of joining the online conversation, and nothing is coming along to replace them. There are memes online that are inappropriate, there are memes online targeted to be offensive, and there are memes online targeted to put you on a better mood. This doesn't even take into account the memes that friends share with each other in DMs or manually, by calling out their friends name and having them come over to see it on their phone. Memes are a cultural phenomena that we love, and have no doubt that is here to stay for a long, long time, even if the average new meme "dies" after like a week on Reddit. 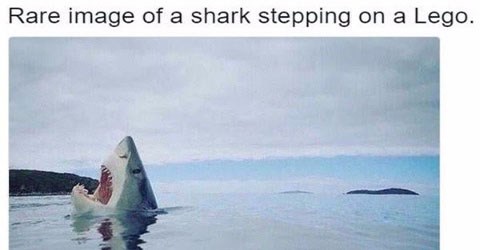 he plays by his own rules