Giving Thanks To Professional Dogs Hard At Work

It is often talked about how pets are a lot of work - you do so much for them and all you get in return is love, right? Wrong. Pets give back so much more than just love. For some people, they're their stability and support, for others, pets are one of the reasons they keep fighting day by day.

Then, there are dogs who have made it their actual jobs to help people, and seeing everything that they do each and every day truly makes us think that we're the ones not doing enough for them. So, today, we're saying thank you to all of our doggo helpers and doggo heroes. And we're saying thank you to r/dogswithjobs, the subreddit that gives these amazing doggos love every single day! 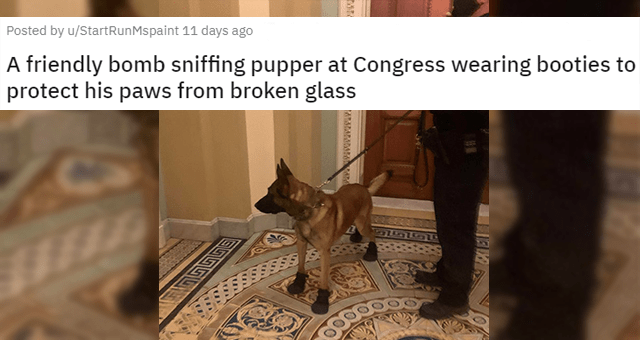 Reunited, and it's never felt better! After 3 long years, Debra Mejeur has been reunited with her dog, and for the dog, it took no more than a single whiff of her old blanket to jump right back into her owner's arms.

According to Yahoo!entertainment, Lola, the dog, is an especially trained seizure alert dog, and she went missing in October, having escaped from a fenced area during a family trip to Chicago. Having escaped during such an unfortunate time meant that Debra wasn't able to be there every day in case Lola came back. Despite that, for a month, Debra and her husband made regular trips to Illinois, hoping to find Lola. They "put up "lost" signs, called on the locals for assistance, and even hired a professional pet searcher," but couldn't find her.

The chances of finding Lola were obviously incredibly low, but, in an incredible turn of events, last week, Debra got a phone call from an Illinois animal shelter and found out that her gorgeous little Labrador has been found. "I still had an ounce of hope, I guess, but the majority of me was thinking she had already crossed the rainbow bridge," Debra said. "I was just completely stunned ... I feel like I'm in a dream right now."

Apparently, a couple had spotted Lola in the woods and gave her food and water before taking her to the animal shelter, and the reason Debra was known to be Lola's owner was because Lola was - thankfully - microchipped. Lola had lost a little weight, but overall, she is in good health. No one is sure how she survived all these years, but everyone is happy that she did.

"I wish she could talk because I would probably give her a little lecture, too," Mejeur said. "'You're not suppose to run away. Don't do it again.'" The plan from here on out is to not use Lola as a service dog anymore. Why? Because they "plan to spoil her from here on out." And you know what, we support that. Spoil her as much as you possibly can. 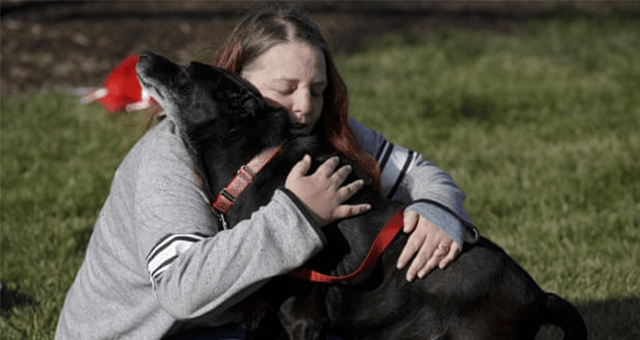 We all know that heartwarming feeling that goes through our entire body when we see a service dog on the street because we know that these dogs are the purest, most wholesome and good kind of doggos. They help people and get little in return. We can only aspire to help human beings as much as these dogs are.

The very least we can do for these service doggos is serve them back by learning about them and giving them as much love and support (and snacks) as we can. So, today, courtesy of a viral tumblr post, we are going to learn about these puppers and show them the love that they truly deserve. 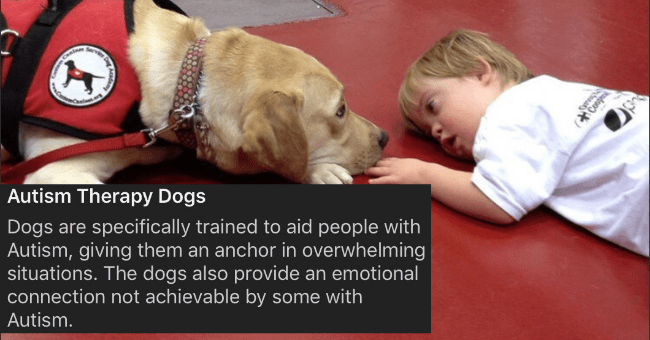 Animals Of Instagram Spotlight Of The Week: Tigger And Nadja

Once a week, we will be featuring an extraordinary animal account on Instagram! Their story, the adorable pictures, and pawesome videos! This week's spotlight goes to Tigger And Nadja, the real-life Pixie and Brutus!

You should all know who Pixie and Brutus are, by now. Just in case you don't -- it's a comic series about a retired military dog who looks after an innocent kitten, thus, creating the most wholesome relationship alive!

Tigger And Nadja are similar to those characters. Nadja, is a gorgeous German Sherpard, who is also a service dog who aids her hooman -- Cori Mendelow.

Not only is Nadja an excellent girl, she's also quite attached to Mendelow's other furbaby -- Tigger! Tigger, is an adorable orange kitten.

Tigger was recently sick but thankfully seems to be doing much better according to Tigger's GoFundMe page. Thank goodness for that!

The two (Tigger and Nadja) are often photographed cuddling each other and it's simply the sweetest sight! 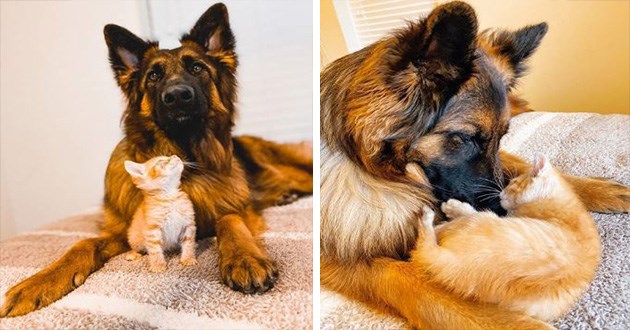 An Historical Look At The Role Of Service Dogs Centuries Ago

You are probably not surprised to hear that dogs have been helping people with disabilities for centuries. Twitter page @DisabilityHistory takes a look back at art and photos that reveal all the good things done by these good boys many years ago. It has been suggested that the earliest surviving illustration of a guide dog from Western Europe dates to the late fifteenth century.  But there are actually several earlier depictions of guide dogs that survive in medieval manuscripts. 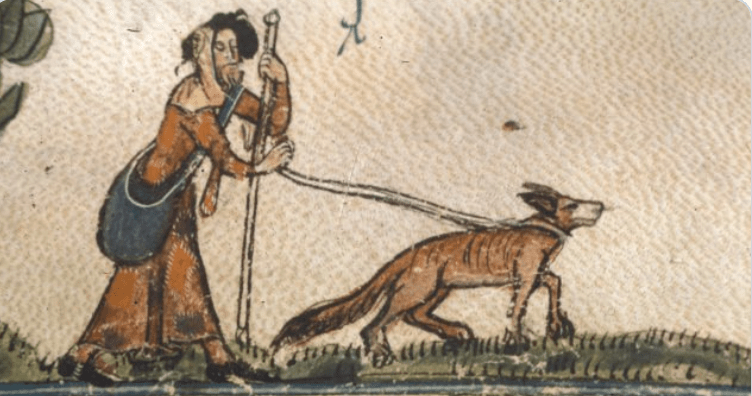 Important Rant About Why Fake Service Dogs Are So Problematic

Tumblr user TrainingFaith is explaining the problem with fake service dogs and doing it in a way everyone can understand. The user has laid out the picture perfectly, and after you'll read this, you might have second thoughts about claiming your dog as a "service dog." 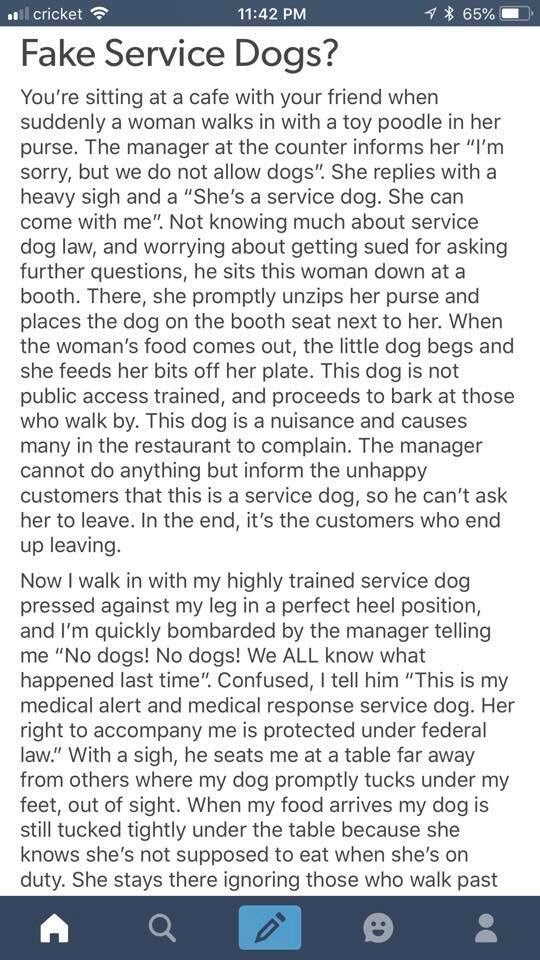 Service Dogs In Training Watch 'Billy Elliot: The Musical' At The Theater

This is so cute -- these service pups in training were taken to the Stratford Festival, in Canada, to catch a performance of "Billy Elliot: The Musical" as part of their official training! And now, the adorable pics of the pups peering over the backs of the theater seats is going viral! 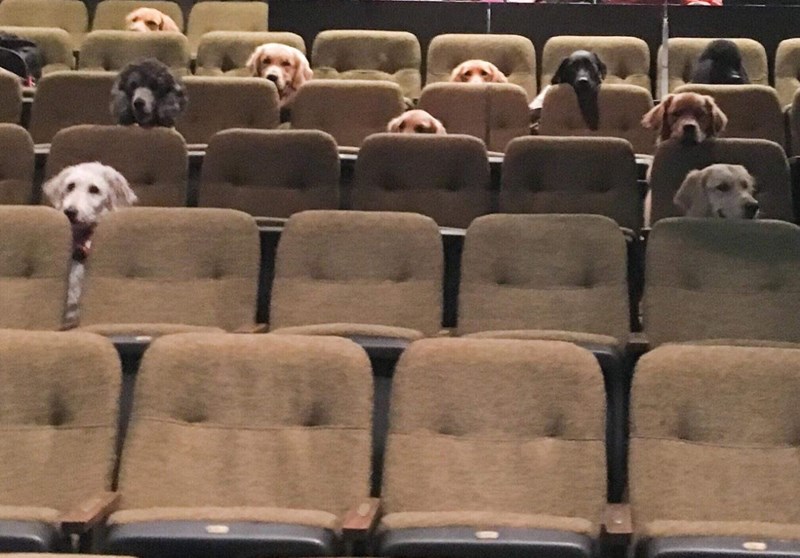 No More Snakes On A Plane: New Rules For Emotional Support Animals

Picture this: you're walking down the aisle in an airplane and when you find your seat, there's a turkey sitting next to it. Or a pig. Or a monkey. It sounds like a comedy routine, but it isn't. In the past few years, there has been an unprecedented rise in people having 'emotional support animals', particularly when traveling on airplanes. While any step towards improving mental health is applauded, there have been many incidents involving emotional support animals on airplanes that really don't belong there. We can't blame these untrained animals for acting the way animals act, but we can question the laws that allow them on board. With new regulations from the US Department of Transport, things are about to change. We discuss these changes below, and whether they are for the better or the worse. 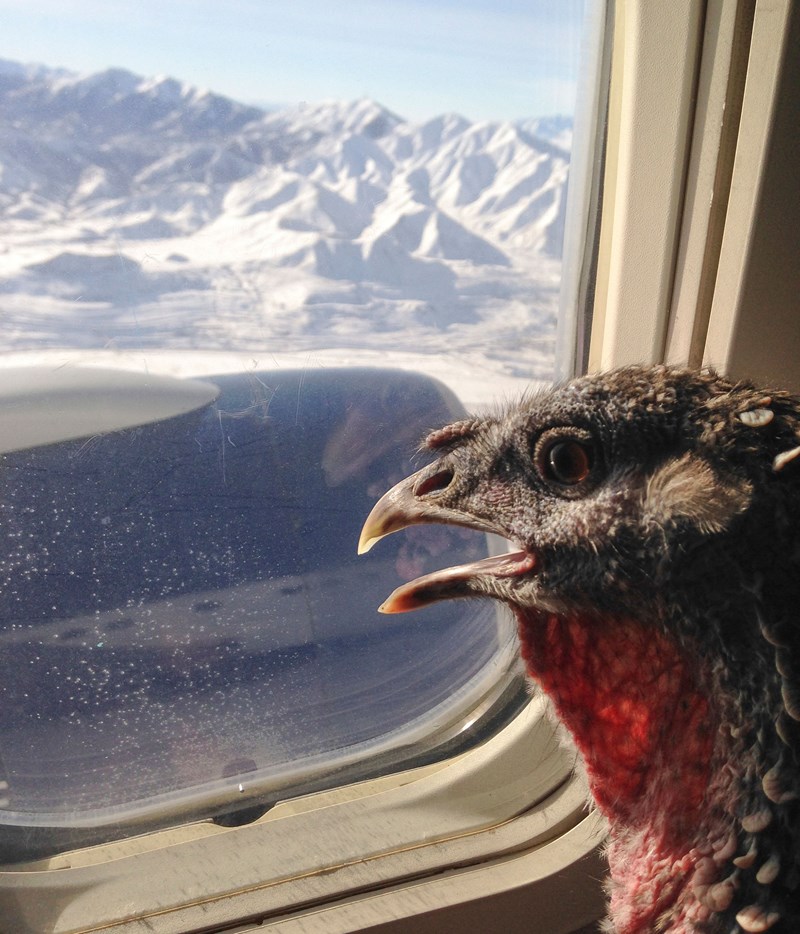 After 11 Years Of Dedicated Service, Retiring K-9 Gets The Memorable Send Off He Truly Deserves

Capone has been on the force for 11 years and now roughly the age of 80 human years, he's taking his final ride. Check out how his friends at the Burlington Police Department in Vermont say goodbye. 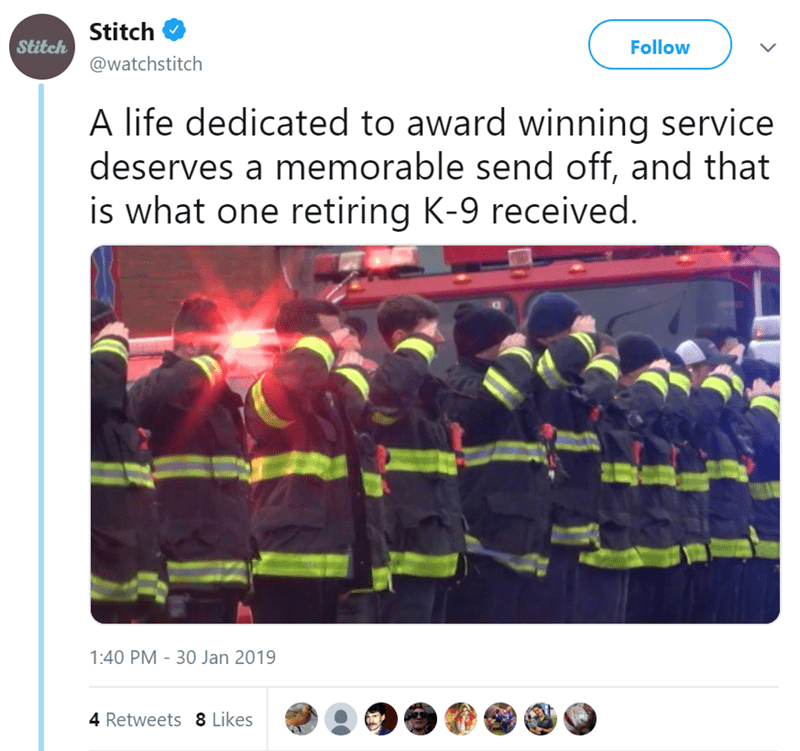 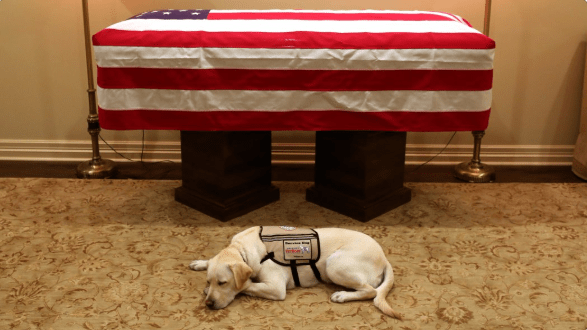 An Air Force Veteran from Land O' Lakes, Florida, was reunited with his best friend after his lab went missing for 22 days, thanks to the hard work of a pet detective. Their reunion will melt your heart! Via: Uplifting Today 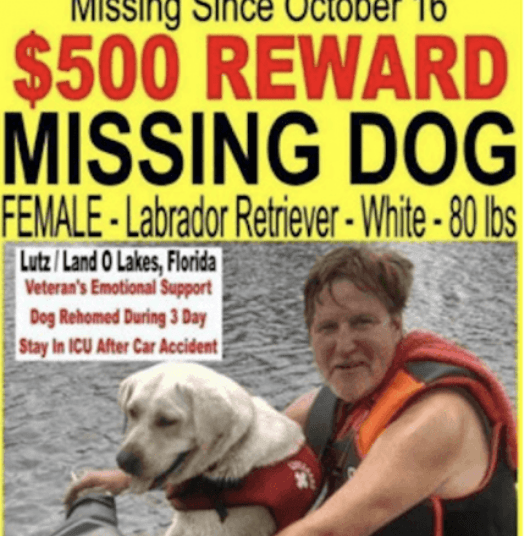 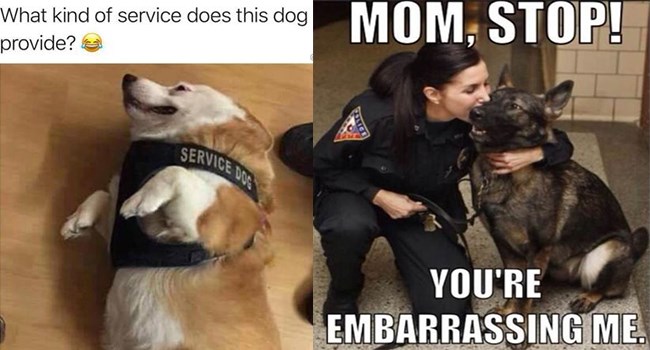 Arien Smith of Royal Service Dogs: Advocacy and Art and The Major Barkana is an artist, coach, motivational speaker, and advocate for disability rights and mental health. He drew this wonderful fan art series of Disney Princesses with service dogs to raise awareness and acceptance for people with disabilities and service dogs! It's both a critique on the lack of disabled characters and advocacy for disability rights. Enjoy the art and the Princess' stories below… 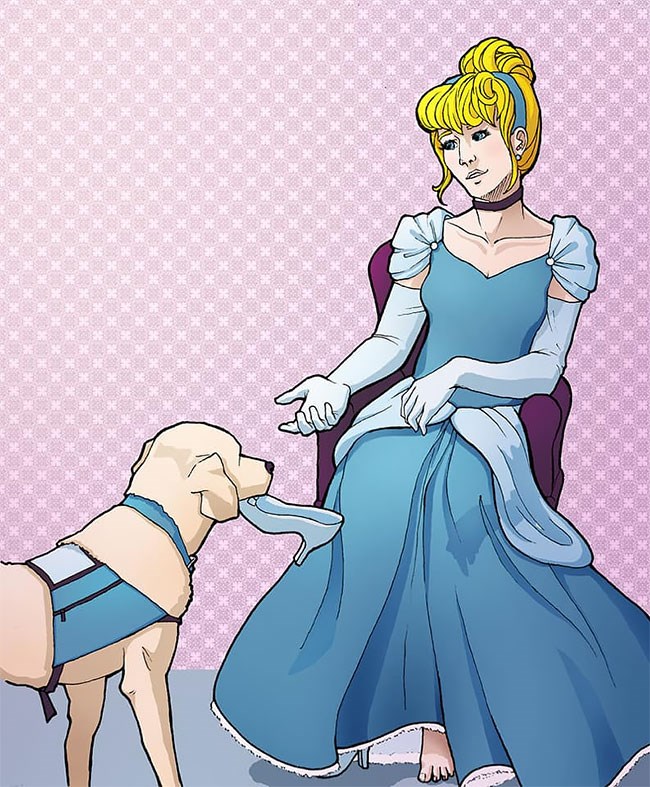 Toronto YouTuber Corey Dixon announced via Twitter that his best friend and family member, 4-year-old service dog Aspen, had sadly died after falling ill during a weeklong stay at a PetSmart pet hotel. Dixon also stated that his vet informed him that Aspen died of severe pneumonia. Something that was overlooked while staying at PetSmart. While PetSmart has retaliated saying that Aspen's death was due to pre-existing conditions...

Makes us wonder, just how qualified are these PetHotels to be trusted to take care of our loved ones? 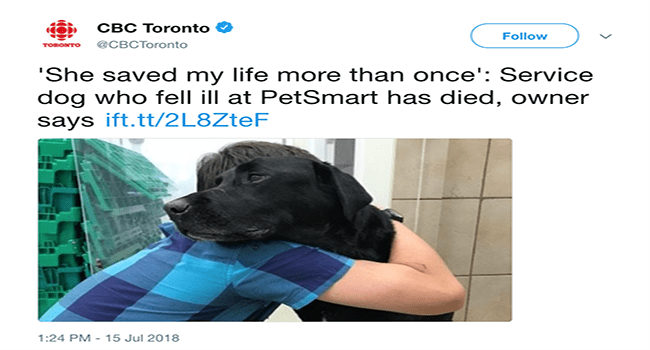 Service dogs are always on the lookout to keep their owners safe and sound. They will go beyond to do so as well, especially if their owner is in trouble and needs help. When a dog first approaches us, the first thing we think other than how adorable they are, is where is it's owner? Well, it's the same for service dogs, except they are approaching you for help, for their owner. Melissa Hope (@lissalet) offered up a public service announcement on Twitter after an incident like this happened to her. 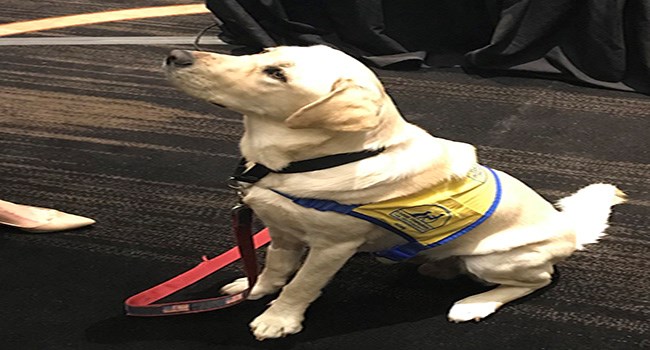 One lucky airline passenger ended up with eight additional carry-ons at the Tampa International Airport last week. Diane Van Atter got the surprise of a lifetime when her service dog, Eleanor "Ellie" Rigby, suddenly went into labor while they were waiting to board a Philadelphia-bound flight on Friday. Travelers and employees looked on as the two-year-old yellow lab delivered eight healthy puppies inside the airport's main terminal. Her owners reportedly knew Ellie was pregnant, but did not know how close she was to delivery.

Boarding all passengers on this direct flight to adorable! 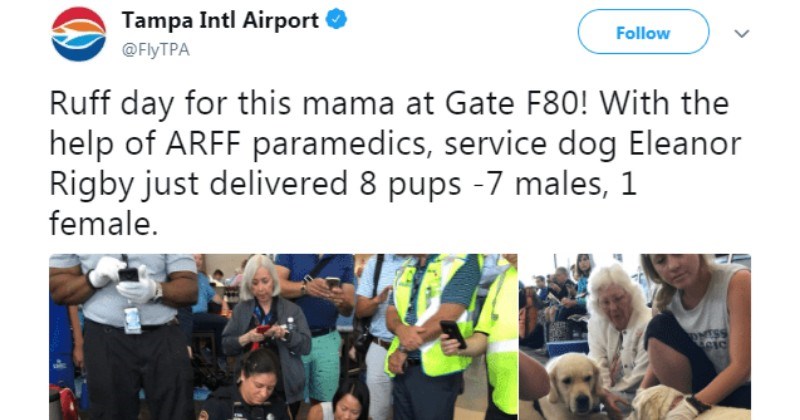 Words Worth Waiting For