According to a recent BBC report: "A giant tortoise managed to make it about a mile across a town before being apprehended by police. Titan, who weighs in at a whopping nine stone (60kg), was found in Kesgrave, near Ipswich, on Friday. It took three police officers to lift the wayward pet into a van and drive him home to his worried owner." Now that is one heavy tortoise!

"Richard Aston said it was a 'mystery' how Titan made it that far as he had not broken through his shelter. 'Maybe he teleported there,' he said. When police called Mr. Aston, he was not at home so had no idea his 35-year-old pet African sulcata tortoise was on the loose. 'There was no sign of the fence being broken, and he can't jump over it - it's three feet high,' he said." How on earth did Titan manage to find his way out of his enclosed area?? All that matters is that now he's safe and sound! 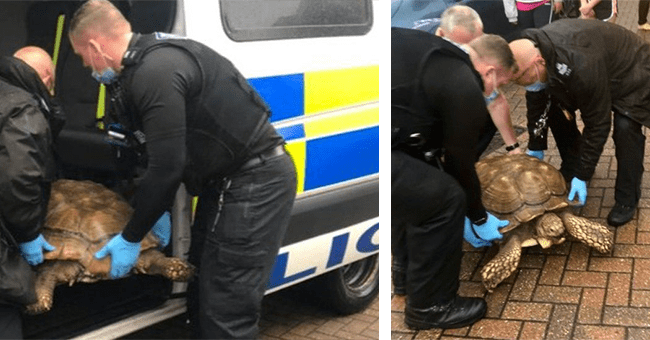