Tumblr Thread: Prompt About A Woman And The Cat With A Key Around Its Neck

Warning: you're about to enter into an adventure full of unexpected plot twists and hilarity like only tumblr can provide. When a story prompt about the most wanted woman in town decided to marry only the person who can open the door to her house with the key around her cat's neck went viral on tumblr, we didn't think much of it.

But boy oh boy were we wrong, because - as tumblr does - it took this story and turned into one of the most simultaneously hilarious and heartwarming story of love, overcoming difficulties, and cats. Never forget the cat. 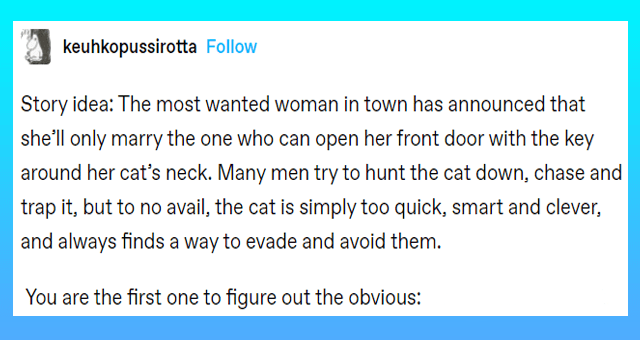 18 Hilarious Posts About Felines That Have Us ROFL