Lion Cubs Having a Ball

"Tell Me About Your Bad Day"

By anselmbe
Repost
Recaption
Comments
Advertisement
I Can Has Cheezburger?
Favorite

Octopuses are climbing out of their cages, koalas are walking the streets like humans and now lions have learned to break into cars. Pretty soon they’ll be behind the wheel, and then it’s game over.

This video of a family in South Africa is freaking everyone out, and rightly so, as one of these giant cats casually walks over to them and figures out how to open the car door with its teeth.

This could just be revenge for all the delicious hipster children and bros who have ben taunting them in videos for our amusement.

A lion in San Diego also recently gave a speech to zoo-goers, which must have been a call for action to lions around the world.

This clip was filmed last year, but has gone vial this week with over 4 million views.

If The Detroit Lions Were a Soccer Team

I'll Give You Two Hours To Stop Doing That

Lion Cub Takes Their Dog For a Walk

Via Bing Express Shop
Repost
Recaption
Comments
I Can Has Cheezburger?
Favorite

Via Philadelphia Zoo
Repost
Recaption
Comments
The Daily What
Favorite

A pack of 14 lions was recently caught on camera surrounding a 1-year old elephant at the Norman Carr Safaris Chinzombo Camp in Zambia by journalists on safari.
Odds were not in this baby elephant's favor, but thanks to some quick wit and a nearby stream, it was able to escape and reunite with its herd.
The safari guide was as shocked as everyone else. "In the 30-plus years I have been a safari guide in Zambia at the Luangwe Park, never have I seen anything like this," he told the Post.

These Lion Cubs Get Feisty At the Oregon Zoo

Bear With Me You Guys, I Can't See 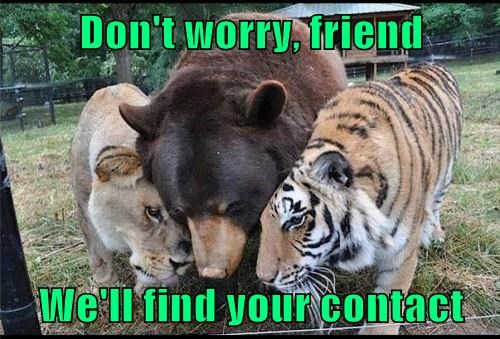