15 Cats In Hats Thinkin' They're All That

Cats have all kinds of personalities and vibes and chemistries with their owners. While some are dignified and enjoy just being pampered and able to sleep all day, some like to be silly and playful. Hats are just one of the ways that cats can reflect a certain aura to us. Maybe I am humanizing them too much but really I find each relationship with each cat to be unique and I love seeing owners relationships with their cats in these photos.

Some of the cats in hats in the following photos are ridiculous, fancy, and sweet. While cats are not here for our amusement, sometimes they allow us to humor ourselves for just a moment before they stalk off and go back to cleaning their paws for the millionth time that day. 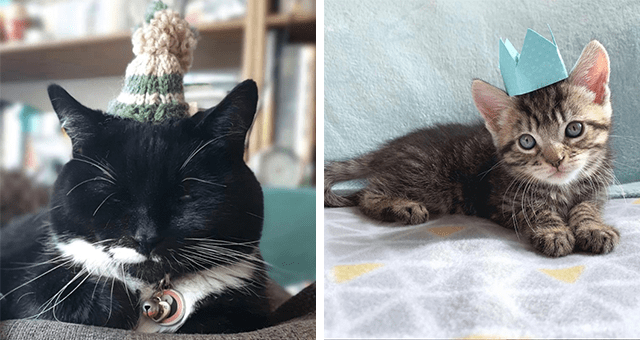 Finn's Owner Gets Crafty With His Cone In Padorable Photo Shoot

Meet Finn, the golden retriever and 1000% good boy! Finn had gotten received neutered and had to wear a cone for up to two weeks, in the hopes of cheering him up -- his mom, Jenn Frates, decided to decorate his cone daily in fun new themes.

And not only did they cheer Finn up, but they also cheered us up too. Frates told The Dodo, "I thought it would be a fun way to get through the long two weeks of him having to wear an ugly cone. I'm trying to stock his first-year puppy book with lots of funny memories. I also just love art/being crafty in any form."

Frates continued, "We do a lot of photoshoots so he knows when I have him sit in the backyard that he has to wait and if he does … lots of treats are coming." And what pup wouldn't be excited about a treat? We absolutely adored scrolling through Finn's photoshoot and we hope you do too!

Story via The Dodo 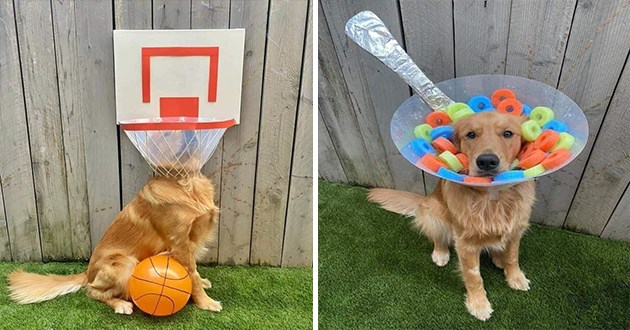 Oh, costumes! Nothing screams "fun" like dressing up! We humans really love to dress up. We love it so much we have holidays dedicated to the art of dressing up. However, do you know who hates dressing up? You guessed it -- cats. Cats don't tend to like the outfits we put them in, no matter how cute they may be. With the exception of some cats, still, it's pretty rare to come across a cat who enjoys wearing anything on their beautiful coat. Most cats we knew even hate having a collar! And that's about as basic cat clothing can be.

We can still have fun with cats dressed up though, and this way no cat has to endure dressing up! In collaboration with Israeli artist, Ilana Zeffren, we can enjoy cats all dressed up without any of the guilt! Zeffren has illustrated a few cat costumes below, and it's your task to guess what that costume is! The first image will simply show the costume, and the following will reveal the answer in the upside-down text.

Let us know how many you got correct in the comments below!

And if you want more cat enjoyment, be sure to check out last week's installment: New "Unofficial" Study Released On Toy Mice Statistics! 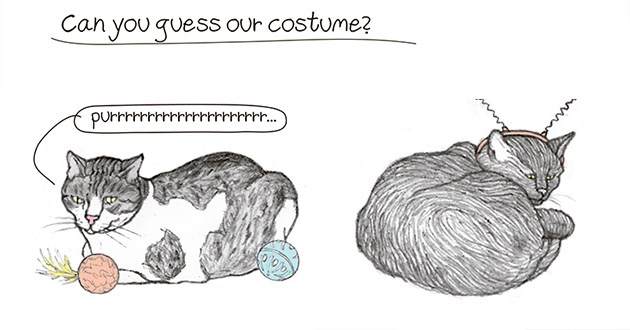 We're almost there! Just one more day and we can finally dive into the weekend! Until then, we've gathered up the freshest cat snaps from this week to help keep the party vibes alive and well!

Last weekend was Halloween, and a majority of the snaps are of cats all dressed up for the occasion! We don't mind in the slightest, anything to keep Halloween going is where our hearts are at. Plus, cats all dressed up in costumes? That will never not be the cutest thing in the world. So, keep 'em coming, cat snap factory! We are hungry for more delicious cat moments!

If you are famished and need more cat snaps to satisfy your appetite, we give you permission to raid our fridge and grab some leftovers. 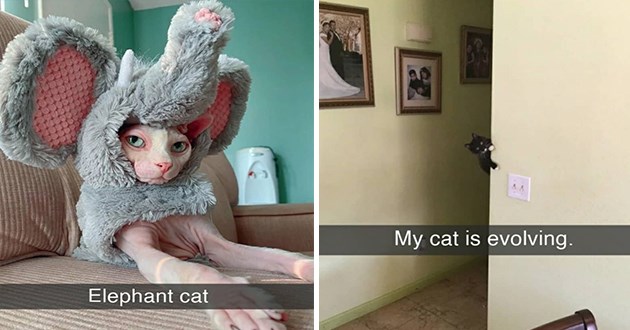 This year's Halloween may have been little bit different than last years, but that doesn't mean we didn't have an insane amount of fun! You guys are proof of that! When we asked you to send us picture of your pets in their Halloween costumes, our incredible Facebook users really showed up, sending hundreds of pictures!

We've picked some of our absolute faves and put them in this little collection :D The rest of the amazing costumes that we might have missed, you can always see on our Facebook page challenge. Though not everyone is in this list, we want to thank everyone who participated and sent pictures of their adorable pets. We have looked at every single picture that we got, and oh my goodness, we could not stop smiling! We hope you had amazing Halloween with your pets this year, and that next year we'll be able to freely walk around with our puppies and kitties, collecting all the candy we want! 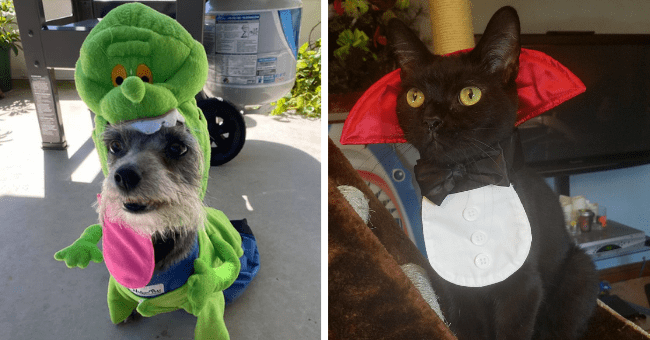 When it comes to Halloween, if you wanna stand out, you have to truly get creative. And what's more creative than going out during Halloween with your dog... who has three heads. Don't worry! These are not real heads, they're not real Cerberuses! Shh, it's just a costume, but maybe from far enough and when it's dark enough, it doesn't look that way.

We know that we would for sure give these puppers first place in any costume competition. And it's not because they have the best puppy eyes or because we're biased since we love dogs so much. We swear! It's because these doggos are the best doggos for being such good sports and enjoying Halloween with their owners. 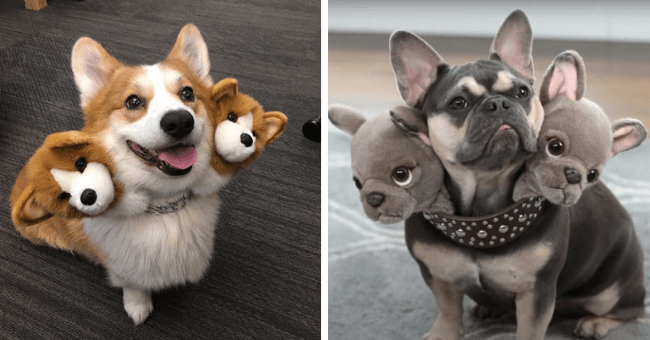 Many people don't always see the appeal of hats. You have to have a certain sense of... fashion to be able to properly rock a hat, and not everyone feels brave enough. But boy oh boy, after seeing these pics of animals wearing tini-tiny hats, you will understand the appeal of hats right away. 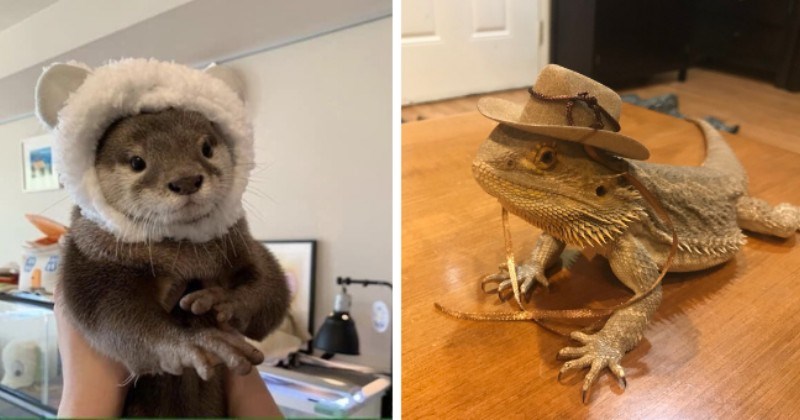 gasp did you feel that? It's the ghost puppy licking the tip of your nose. Oh my god, we know, it's terrifying.

Seriously thought, ghost puppies, we would argue, are the least terrifying ghosts out there in the ether. They, of course, don't know that they are in fact supposed to be acting like ghosts and instead act like super excited puppies. They are even extra excited because their owners are laughing and cooing over them having a sheet over their heads- I mean, ghosts, they're ghosts, it's not a costume. Don't be fooled, they are incredibly spooky and not adorable at all. Shh! 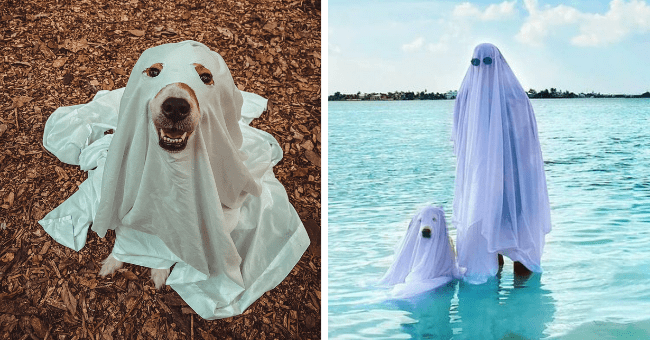 How can we ever truly be sure that cats are related to the those big fluffy scary lions? Well, put a lion mane on a cat obviously. That's all the proof you'll ever need. It's enough to just look at cats wearing lion manes to be 100% sure that duh- of course they're related to lions.

Maybe you'd expect cats to look more fierce with lion manes on, but alas, they still look just as adorable. Then again, lions themselves are also adorable, so maybe we shouldn't be surprised. We wonder if cats feel more fierce when they look more like their lion relatives, if they sense some sort of kinship to lions when you put the mane on them. Sigh gonna have to write that question down with the rest of them for when we finally have a cat translator. 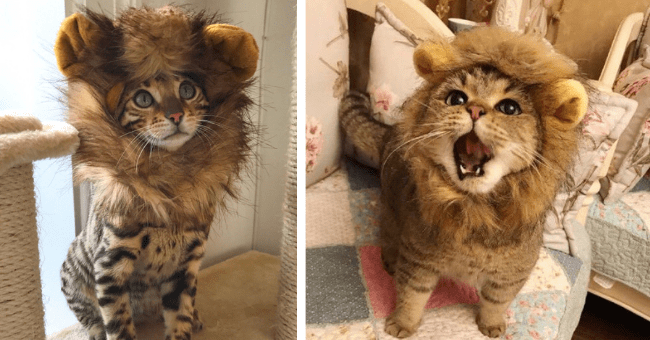 When you need a boost, let the buns loose!

Do you feel that? It's officially September so that means... it's the first day of Halloween!

Yes, we know Halloween is in October but we are too excited and want to get into the spooky mood early! Is there a better holiday than Halloween? Think about it. First of all, the weather gets all perfect, leaves begin to change, sweater-weather, it all just sets such a pleasant mood. Then, you get to dress up and express your inner kid! Also, there's scary movies involved, pumpkin patches/craving, and all that candy!

Seriously, Halloween wins every time. We're kicking it off with some of the cutest costumes for all the bun-buns out there! If you have a pet, perhaps it'll provide you with some inspiration this year! 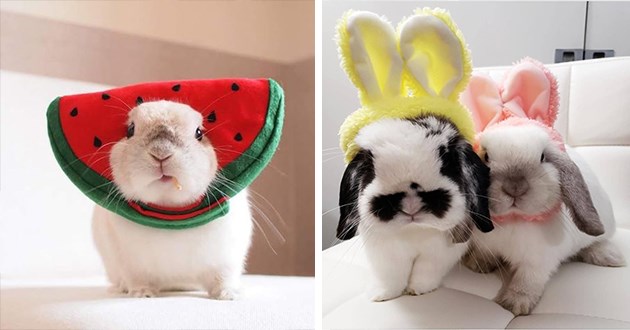 In Hai Phong, Vietnam, there is a cat named Cho. Le Quoc Phong, the owner of Cho, which translates to 'Dog,' told Buzzfeed News, "It was really hot the day I adopted Dog and he was breathing like a dog, so that's how he got his name."

What he didn't know at the time, Dog would become one of the coolest and seemingly most chill cats of all time! Le Quoc dresses him up in adorable outfits and Dog doesn't seem to mind it one bit! You can just tell from the images below Dog is full of personality!

It's no wonder that he soon became a celebrity in the marketplace, in which he works! Dog was 3-years-old when these images below circulated the web, meaning he'd be 5-years-old in 2020. 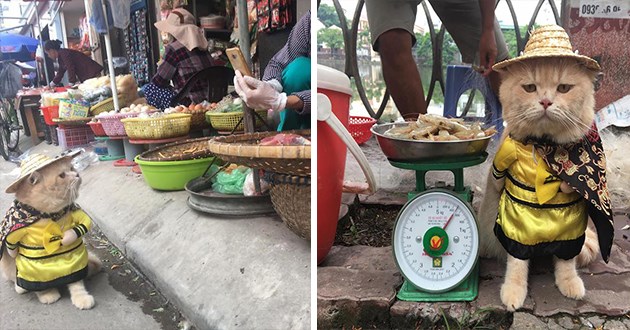 "Do you have the chops to be America's first drag dog superstar?" This is the Instagram tagline for Dogs Doing Drag, a magical Instagram page filled with... you guessed it -- dogs doing drag!

If you have a pup and want to join the fun, take a pic of them all dolled up in drag and send them a submission! 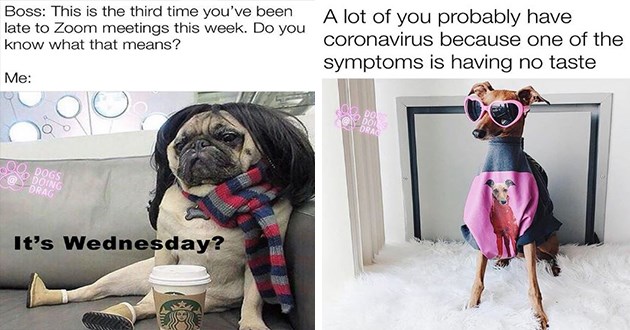 In times of worldwide uncertainty and fear, it's hard not to get bummed sometimes while being stuck at home for so many days.

But some people just won't let that break their spirit.

Like this guy, for example, who became an internet sensation for trying to bring a little bit of joy to the world.

A guy named Jack has begun posting on twitter photos of his friend, who has apparently been dressing up in crazy outfits while he walks his dogs so as to give homebound neighbors something to laugh at if they happen to catch him walking by.

When Jack was asked for more details about his friend, he tweeted: "Just to answer a couple of your questions: He's in Weymouth, he doesn't own a fancy dress shop, he used to be a Royal Marine".

What a lovely initiative! 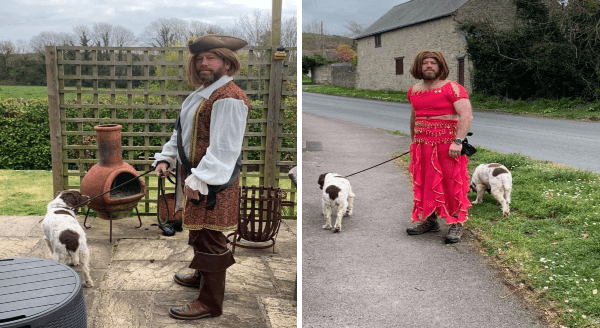 Cat Cosplays Are A Real Work Of Art

Instagram sensation @cat_cosplay takes pet costuming to the next level!

We've gathered 10 of the most recent cosplays that have us grinning from ear to ear!

Which one is your favorite? 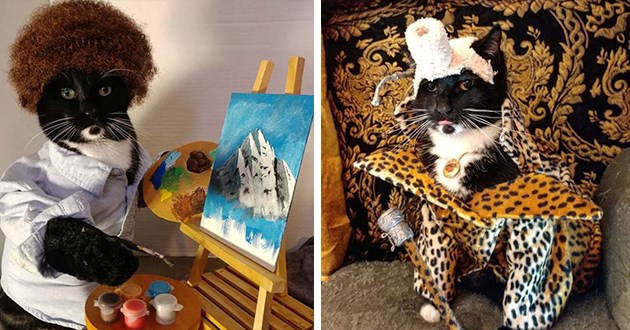 Cats Vs Dinosaur: A Showdown We Didn't Know We Needed (Video)

What happens when YouTuber Kittisaurus does the dinosaur challenge? Do you think her cats will like her in the T-Rex costume?

Well, according to the thumbnail chosen -- that's a definite no.

Within Greek Mythology there is a pup called Cerberus, known as the three-headed hound who guards the gates of the underworld, or rather "hound of Hades."

Sounds paw-istively bada**, huh? Well, some pup owners decided to make their very own Cerberus! Bringing the legend to life through realistic (and not so realistic) additional heads that match their dog breed!

Which one is your favorite? 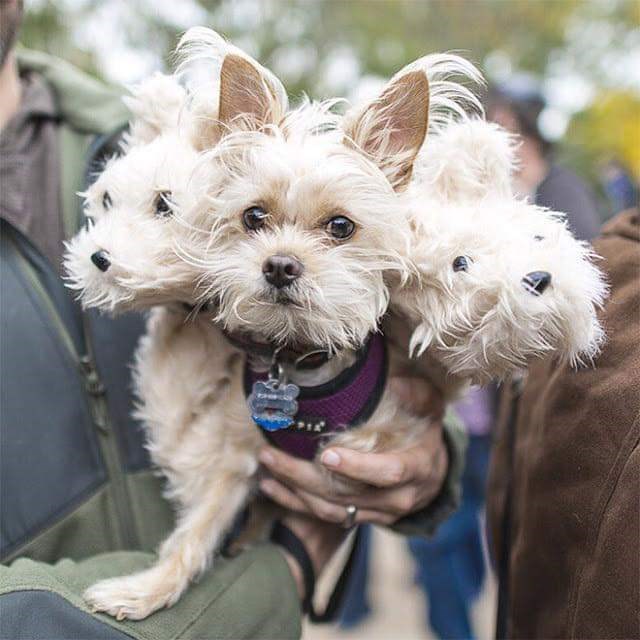