Matt Wilson, the artist behind these extraordinary sculptures, is influenced by natural elements of the environment in which he lives.

He dives into his sculpture exploration on his website, "Using recycled and organic materials- scrap metal, reclaimed wood, bone, etc., my sculptures depict continuous life cycles that consciously and unconsciously permeate our awareness. The upcycled work I create is a testimony to the belief of conserving and appreciating our resources, so that the environment in which we live will continue to be an environment in which we desire to live.

My goal as an artist is to make artwork unlike art people have seen, while at the same time recognizable in the identity of everyday materials. I only hope the sculptures will inspire others to appreciate the simple, neglected items from which my creations are born."

We think Wilson achieved that goal with these mesmerizing pieces of art.

Prepare to be stunned. 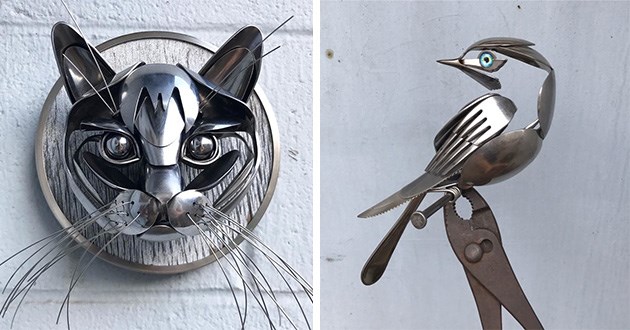 What if cats are actually a higher power, here on Earth, to help guide us? Or to simply have us worship them?

But maybe they were truly onto something that has since escaped the human eye...only for it to be revealed in a series of photos such as this.

Are cats a higher power? Check out the pics down below and decide for yourselves. We're going with "heck yeah!" 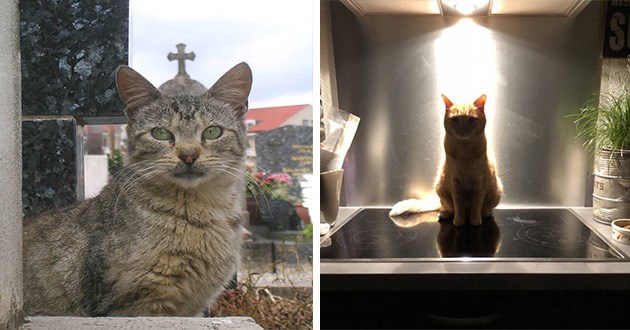 Fascinating Look At Animals And Their Superpowers

In this video you've find out that dragonflies can see in slow-motion, or that a giant rat's sense of smell can actually detect tuberculosis!

How crazy is that?!

There's so much to learn, and BBC Earth does an excellent job on delivering animal facts!

Pictures Of Gary, The Adventure Cat, Living His Best Life

This is one seriously cool cat.

Gary is famous on the gram for all this stunning adventure pics! Seriously, this cat lives life to the fullest -- and probably way better than any of us.

From the snowy mountain tops to kayaking out on the lake, you'll never see Gary without his sports gear on!

Check out these really heckin' awesome pics of Gary living his best life.

And if you want more bad*ss Gary pics -- we've got you covered. 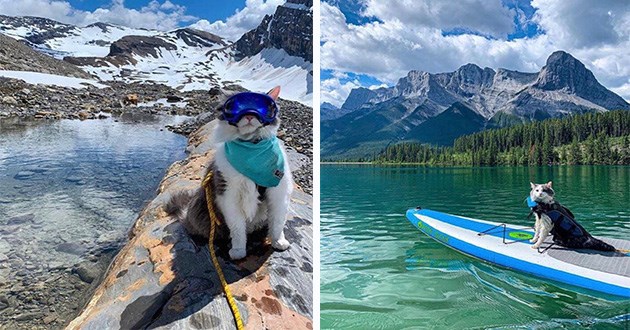 Animals are truly a gift to this world. Their adorableness, wholesomeness and pureness... plus, they can be hilarious at times!

There's so many reason why we love animals, and decided to lay out all the feels in this animal gallery! Filled with all species, there's heartwarming and really awesome pics and vids -- all ready for your viewing pleasure!

So, take a moment, kick off your shoes and get cozy. You're about to go on a great adventure. 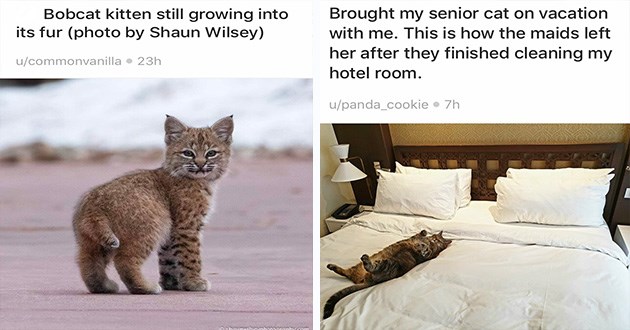 Such Regality. Much Monarch. 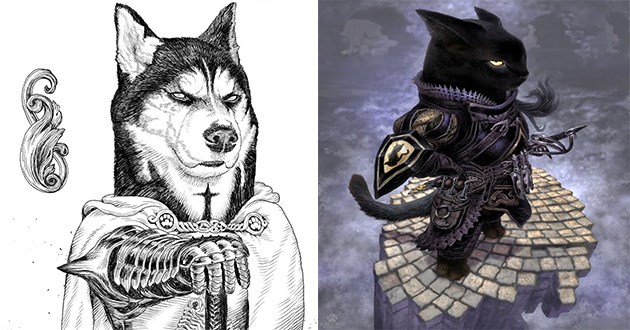 Natalie Kepa took her six-year-old daughter, Stella, waterskiing in Kumutoto Bay, New Zealand, when they ran into something unexpected -- orcas!

Kepa told Storyful that upon first seeing the orcas, she simply "didn't know what to do."

As you can see in the video, Stella is absolute natural waterskiing, her mom and others cheer her on as she takes on this new activity for the very first time. However, soon those cheers turn into shouts of shock.

"I was beside myself," Natalie told Storyful. Stella, on the other hand, "totally loved it," Natalie said. She "was crazily calm throughout" and is now keen to get out again as her friends thing she's an awesome "whale rider."

According to Whale Facts, orcas tackle large prey and won't attack a human unless threatened. Did you know that there are no known cases of humans being killed by them in the wild? Just something to chew on.

Be sure to look at the bottom of the video under the wake at 0:29 in the water... CRAZY.

Concept artist from the UK, Joshua Dunlop, has created some ultra-realistic Pokémon and we're speechless!

If you're a fan of Pokémon and/or appreciate really great concept art -- you'll love this!

All we can say is thank goodness there isn't a Mr Mime in this list, we'd never sleep again. 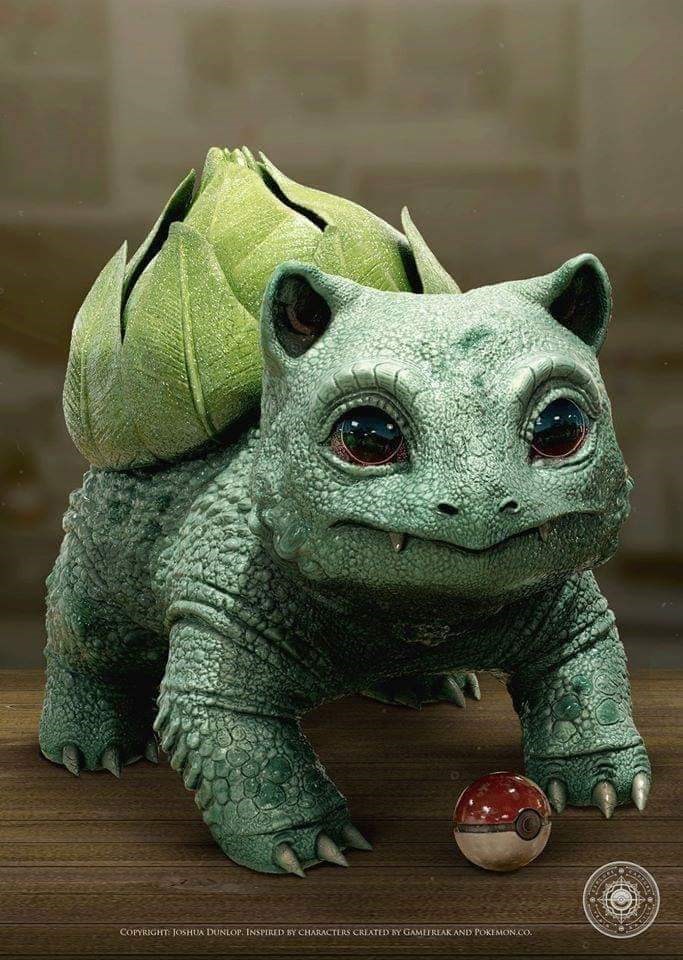 We love transformations -- especially if its cat-related!

Imgur user, emilymartian, had decided to create the catio of her dreams and documented the process!

The catio, named 'Pussy Palace,' has come a long way since 2012! And like any palace, there are rules that must be obeyed!

Thankfully, they're all listed outside so you can read them before stepping into the kitty kingdom!

Commentary below is provided by emilymartian: 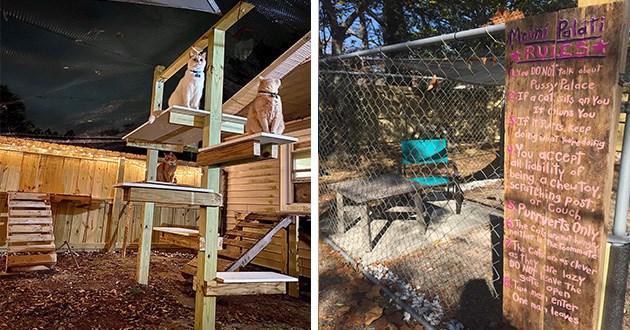 Artist Re-imagines Doggos In Historical And Fantasy Roles As Centaurs

No one ever expects the Dachshund Inquisition!

Artist Nikita Orlov has re-imaged our favorite dog breeds into roles of the past and of fantasy. But the imagination doesn't just stop there, there's an added twist -- Centaurs.

If you're an avid D&D player, these characters will definitely spark that imagination! If not, these are still pretty darn cool to look at and enjoy! 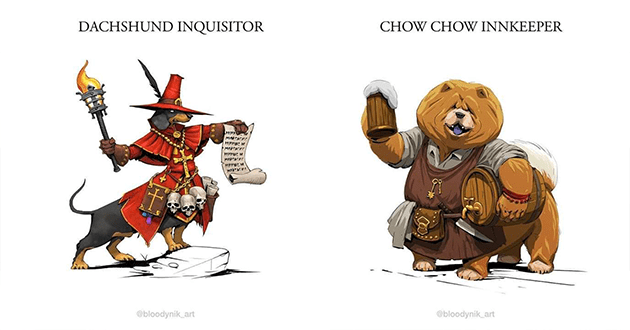 We all know according to evolution, we are descendants of apes. Yet, it's even more clear after seeing images of just one gorilla.

Meet Anaka, who resides at the Zoo Altanta. Anaka is unique, not only in terms of skin, but in personality as well. "[She's] often barking at her mom and others to get a prime spot for food and juice," Altanta Zoo wrote on their website. "She is often seen riding piggyback on her brother and sisters."

When the Morena Lale commented on a post from the zoo, asking if Anaka had vitiligo (a skin condition characterized by loss of skin pigmentation).

The Zoo responded, "Well, her skin pigment has always been like that and hasn't changed over the years, so we think it's just a cool birthmark." 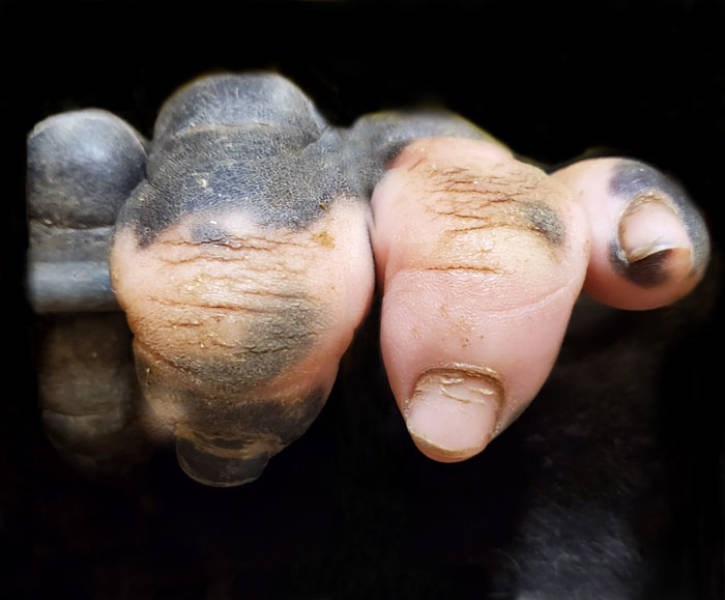 Pollack's Instagram account is jam-packed with stunning photos of these minuscule hypnotic mushrooms. In an interview with PetaPixel, Pollack reveals how she got started, "I started to get serious about mushroom and Myxomycete photography a couple of years ago, when I found and photographed my first Myxomycete. I had no idea what it was, so I looked it up online. I was immediately fascinated with the Myxomycete life cycle, and I have been avidly hunting and photographing them ever since.

As I looked for the tiny Myxos, I also started noticing really tiny fungi, and started photographing them as well. These tiny organisms are all over the forest when it rains, but they are so small that people just don't see them. My goal is to reveal their beauty and magic!"

You have definitely done so! Scroll down to see some of that magic mushroom revealed by Pollack: 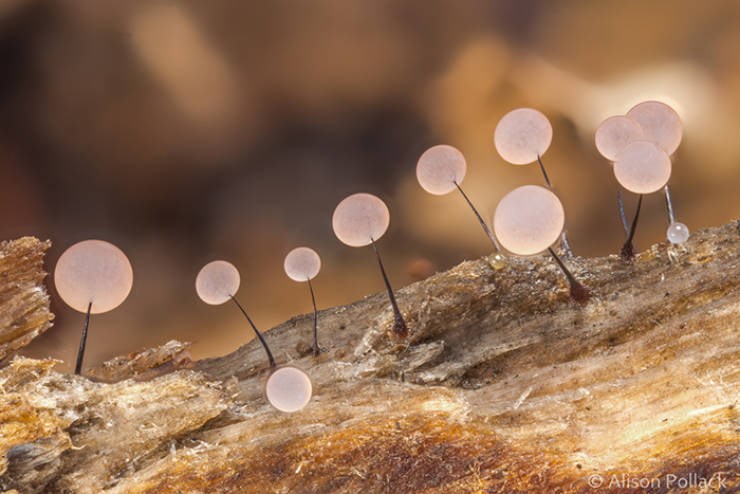 Chats With The Void: Existentialist Dread Comics That Are Actually Wholesome

And while all that sounds really awesome, the comics about existentialist dread is way more wholesome than we ever could have imagined.

Let's put it this way, we came for the despair but stayed for the wholesome.

This art of animals chatting with their void selves have a lot of depth and wisdom to them, we we're now new fans of this amazing artist! 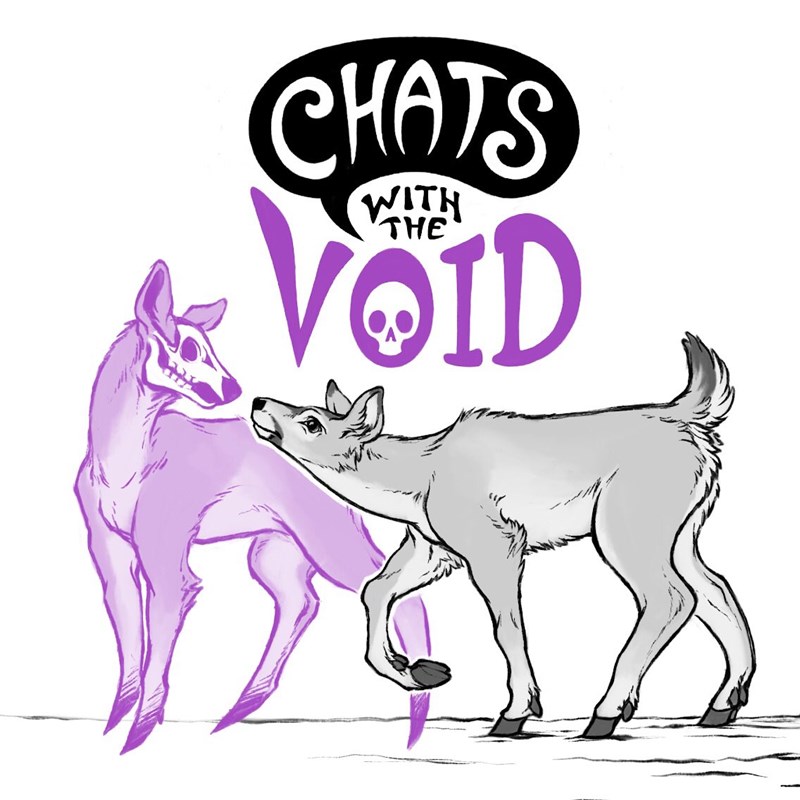 Japan Now Has Homes Designed For People With Cats

Japan has designed homes specially for felines and of course, we're over the moon in the love.

With features such as built-in litter boxes under the floor, this is litter-ally the purrfect home for you and your felines.

The brand Felissimo, has been spoiling felines around the world. They say no one loves cats as much as Felissimo and you're about to see why. Felissimo created the Buddhist statue-style halo scratchers and the crepe omelette kitty beds, but have now moved into the realtor business.

A luxurious living space for cats on a whole new level -- a house made for them!

Felissimo, in collaboration with Wada Kosan, have created these homes in the Hyogo Prefecture, and are currently awaiting tenants iin the city of Kobe.

Not sure about you but if we found out we were inspired by a 'literal garbage bag,' we'd be less than thrilled. Yet, we're still kind of obsessed with it and believe it feels over overall mood about 138% of the time.

Which Pokemon's real life inspiration do you like most? You already know ours. 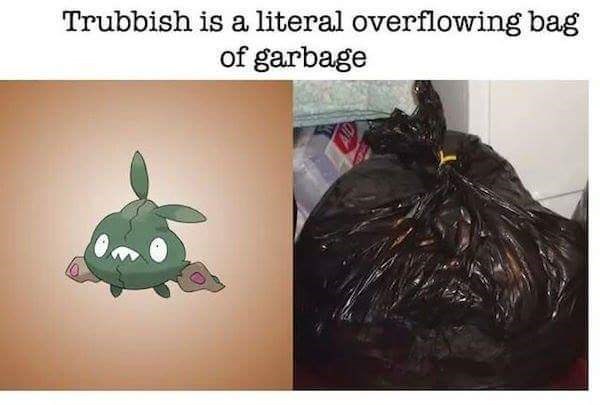 Famous Mythical Creatures Of Every US State (Illustrated)

Welcome to the American bestiary catalog! A catalog full of animals, birds, and other interesting natural (or sometimes imaginary) phenomena.

According to this 12th century author, the purpose of bestiary is "to improve the minds of ordinary people, in such a way that the soul will at least perceive physically things which it has difficulty grasping mentally: that what they have difficulty comprehending with their ears, they will perceive with their eyes."

Thanks to CashNetUSA, for assembling all the greatest mythical creatures within the US, and illustrating them so wonderfully!

If you're living in the US, share what mythical creature your state is famous for! 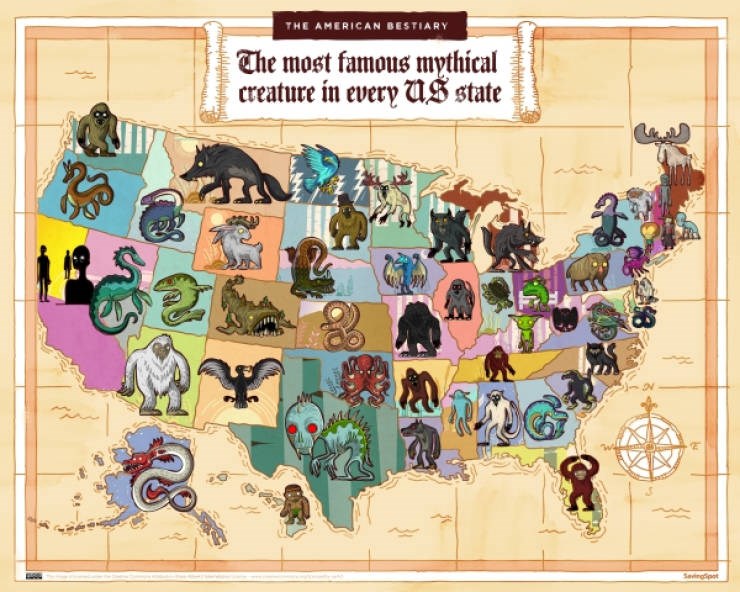 Life Changers: 17 Cats That Made Everything Better