'World's Loneliest Elephant' To Be Released From Zoo

Kaavan, the elephant, had been living at a zoo in Pakistani, the capital of Islamabad, for more than 35 years.

Sadly, Kaavan lost his partner in 2012 and has since been battling loneliness, as well as, living in poor conditions that have resulted in him being overweight, yet showing signs of malnutrition, cracked and overgrown nails of living in an enclosure with poor flooring that has damaged his feet. Up until now, Kaavan had been forced to live in a small enclosure, secluded from other elephants.

Now, steps have been taken to finalized Kaavan's transfer to an elephant sanctuary in Cambodia. A spokesman for Four Paws, Martin Bauer, announced this past Saturday that Kaavan had been granted medical approval to travel for a better life, but his journey to recovery will be a long one. Bauer said Kaavan's wounds are more than just physical, that he also suffers from behavioral issues.

"He also developed stereotypical behavior, which means he shakes his head back and forth for hours. This is mainly because he is simply bored," said Bauer.

There is no word when Kaavan will travel, the push for his relocation has been going on since 2016 by rights activists.

We are so happy that Kaavan will have a chance at a new, better life, and hope he travels to his new paradise soon! 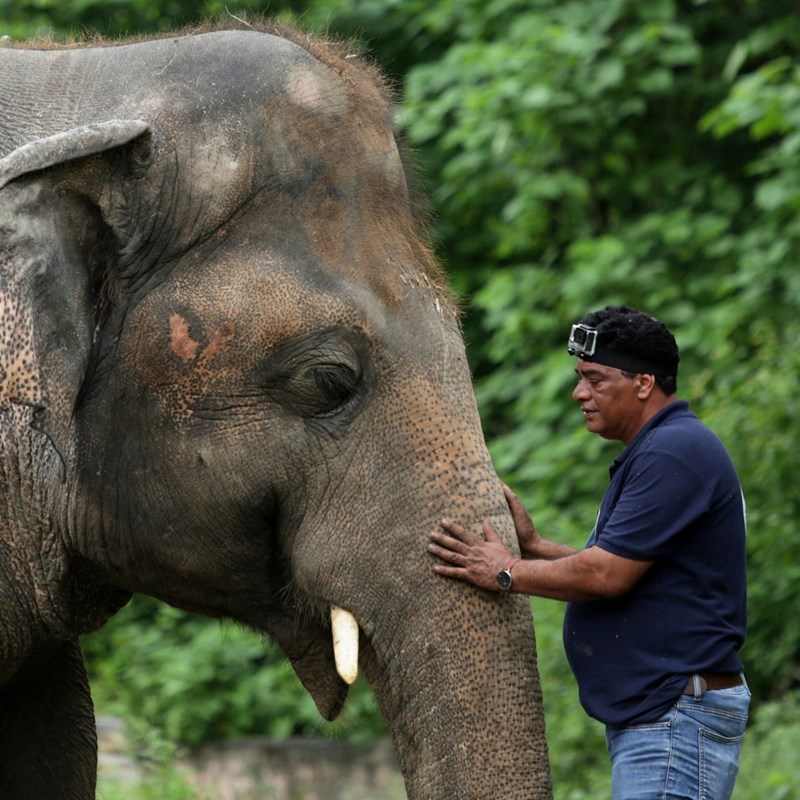 We're in need of a delicious cat medley this week, wouldn't you say?

We searched through the most up-voted cat pictures on the popular subreddit r/cats from the past few weeks, and we decided to share them all with you!

There are images of hilarious cats being hilarious, adorable-ness (naturally), glow-ups, and mourning and loss. We wanted to take a moment to appreciate the beauty of all these cats and remember those who have recently left us, they may be gone but never forgotten. 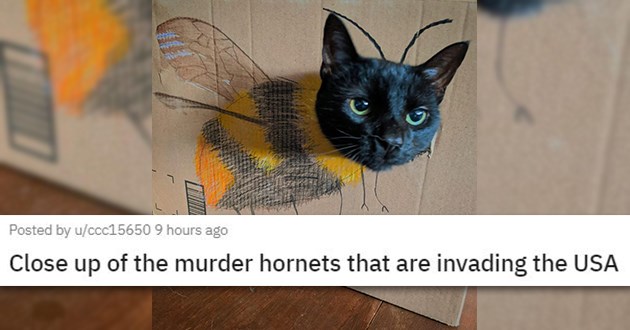 Meet Big Poppa, The Bulldog who Went Viral For His Isolation Sadness

He is doing a great job in keeping his owner, Rashida Ellis, the company she needs these days.

On Wednesday, @RaeElle shared a photo of him, having a particularly sad day in quarantine.

The photo has led many to urge others to continue staying home and flattening the curve so that Big Poppa can go back to his regularly scheduled playtime.

Hang in there, Big Poppa! 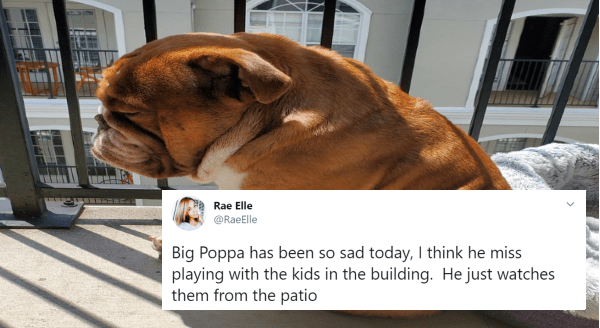 Oh, Jenny Jinya. You've done it again. We are just a sobbing mess after reading your comics.

And yes, it's just as heartbreaking as the previous ones.

All of her comics, as devastating as they may be, are in hopes to spread awareness and send a message to the world.

For example, her previous comic was created in order to shed light on some real problems -- this time, the victim being birds and culprit? Plastic. 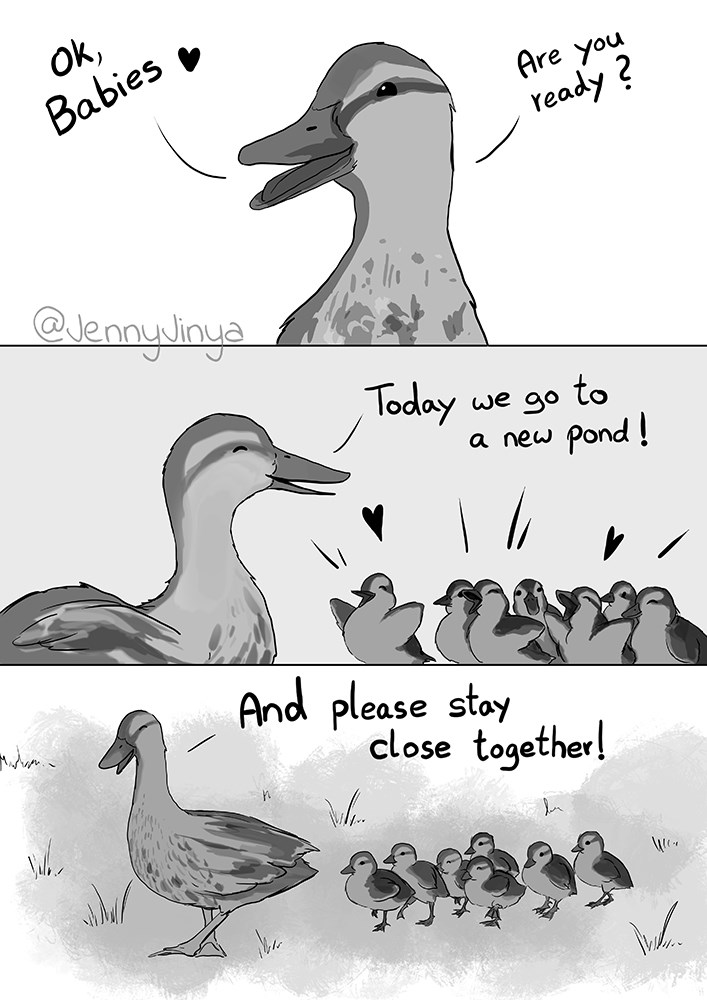 Both heartbreaking and heartwarming at the same time.

Three Snowy Mountain Koalas, who were rescued from the Australia wildfire crisis, have been named after American firefighters who were tragically killed in the region.

Two Thumbs Wildlife Trust Koala Sanctuary have named the koalas, and the trio are now in the temporary care of Australian National University (ANU).

Dr Karen Ford, an ANU researcher and who is running the makeshift hospital at ANU, said in a university statement, "We have 11 koalas at ANU that have come in from the various fire grounds in the region.They just keep arriving. There is nowhere else that has the facilities to hold these animals or this many at the moment."

Ford also mentioned that a couple of the koalas are being treated for burns, while the others are "quite skinny" from malnutrition, due to their habitats being completely burnt.

Koalas are known to breed so slowly that it could take 100 years for the population to rebuild — so saving just one is crucial. That is why the koalas have been a central focus of relief efforts as the blaze spreads across the region.

Why are we crying about something that happened millions ago? Well, that's something you'll find out for yourself, in just a moment.

Singer-songwriter Tom Rosenthal seems to have a little prodigy on his hands!

Rosenthal's daughter, Fenn, had a dream about the tragically doomed dinosaurs and wrote a song about it. Titled, "Dinosaurs in Love," is Fenn's first official solo creation and since it's debut on Twitter -- it's been played 2.4 million times and growing!

Listen to the most adorable and wholesome song below, as well as, Twitter's reactions.

Oh, and be prepared to feel some things. 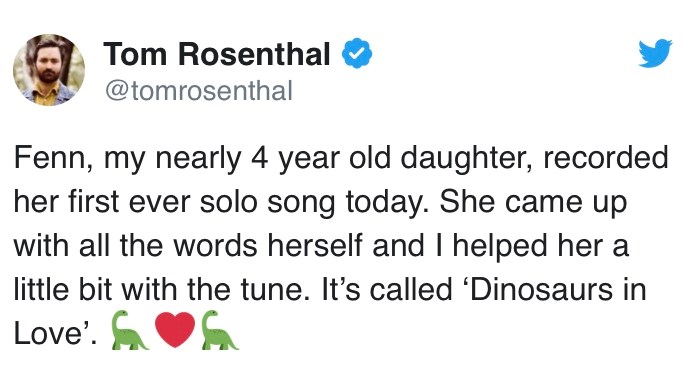 Jenny-Jinya is at it again! Breaking hearts and punching our guts -- right in the feels.

You may recall her popular comic "Good Boy" or the "Black Cat," both devastating illustrations in which death welcomes these poor, defenseless animals whose deaths are related to mankind heartlessness or negligence.

The artist is creating these stories to shed light on some real problems -- this time, the victim being birds and culprit? Plastic.

Plastic has been linked to a major decline of seabird populations, 67% decline between 1950 and 2010.

Here's to hoping that this comic opens more eyes to the real problems at hand: 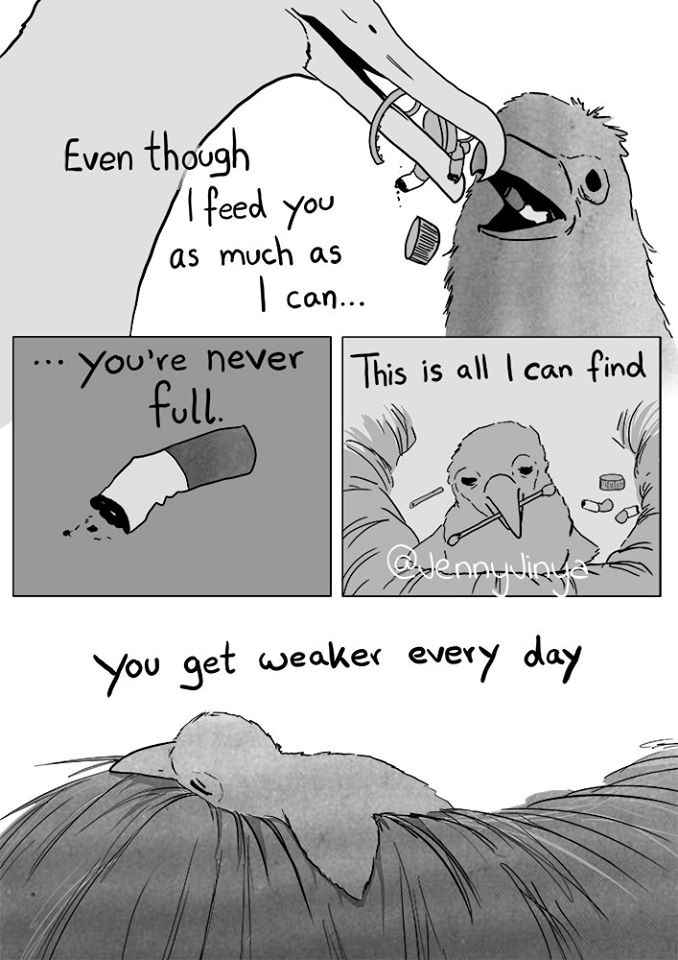 Second Chances: Story Of BenBen The Saddest Cat At The Shelter

Meet BenBen, the saddest looking orange tabby we've ever seen! Poor BenBen completely gave up hope on finding a forever home and it nearly took his life... thankfully, kind souls were able to look at BenBen's sweet face and realize he had so much love to offer, and so much life to him.

This is BenBen's story. And yes, you caught us, we we're crying... and you will be, too. Don't worry too much though, a lot of happy tears were involved.

This story may be on the older side, but it's definitely one that strikes the heart. And now you can follow BenBen on Instagram and see how far he's come!

We love you, BenBen! 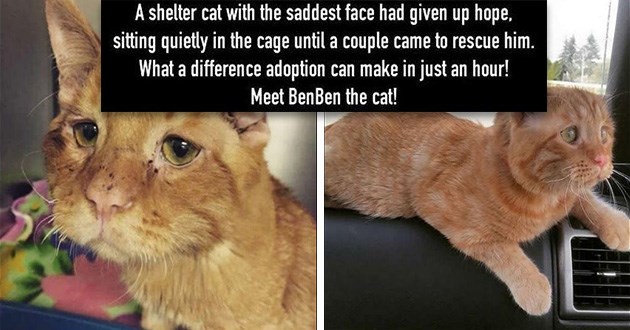 Art can be extremely powerful, in sending a message to the world.

Artists from all over the world have united in spreading awareness of devastating fires in Australia, and with their art reaching thousands, are able to not only spread awareness but to also help bring in even more donations.

Thank you to all the artists for expressing their pain in a way that contributes. 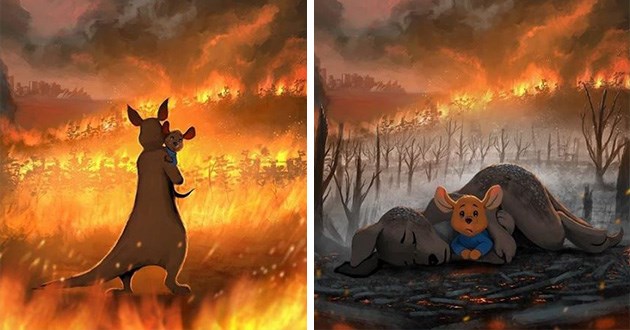 Ahh, the onions! They burn the eyes!

You might recall a story shared not too long ago, titled 'Good Boy,' the story of Death coming to take away a dog into the afterlife. The artist, Jenny Jinya, has created another version but this time with a black cat.

This has the same feel to it but it seems even more punched with the feels. If you scroll down to read, just be prepared for an attack of the sniffles and maybe have a few tissues beside you.

Give your cat a big hug.

And if you have a black cat, share a pic with us in the comments below! We love them so. 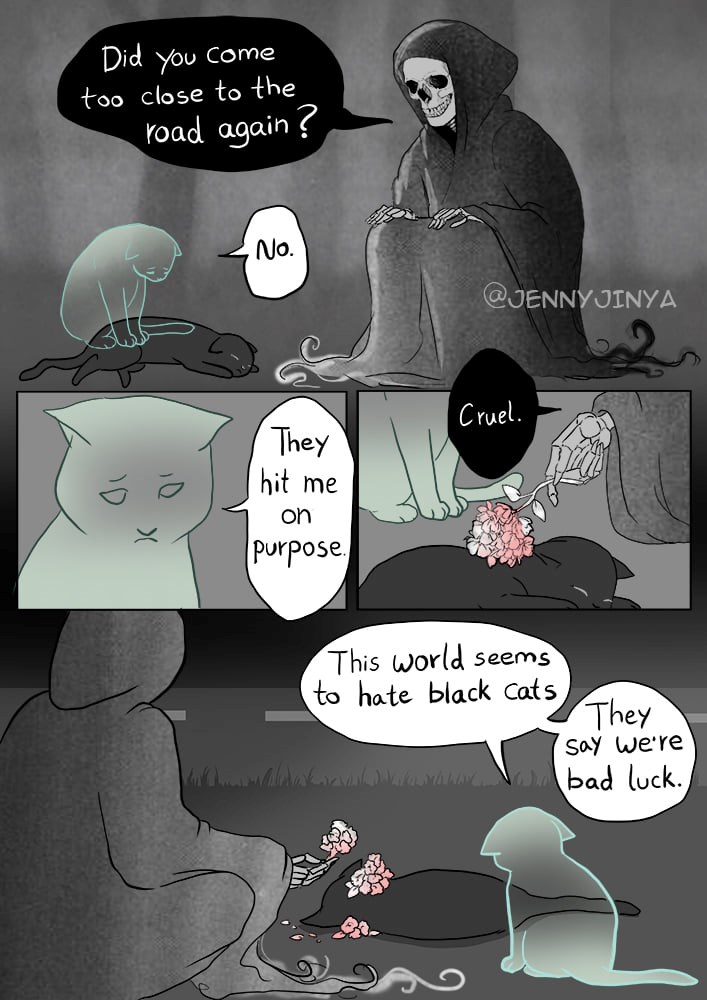 Sad Animal Facts Got Us Feeling Not So Alone (15 Facts)

Brooke Barker, the creator behind these Sad Animal Facts, wrote on Instagram that nature creates the facts and she simply draws them.

While some of these are indeed sad, a lot of them are just a bit awesome. Like, the sleeping panda fact. We all have a bit of panda spirit within us. 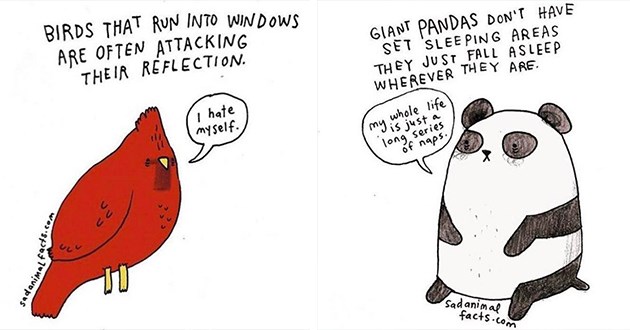 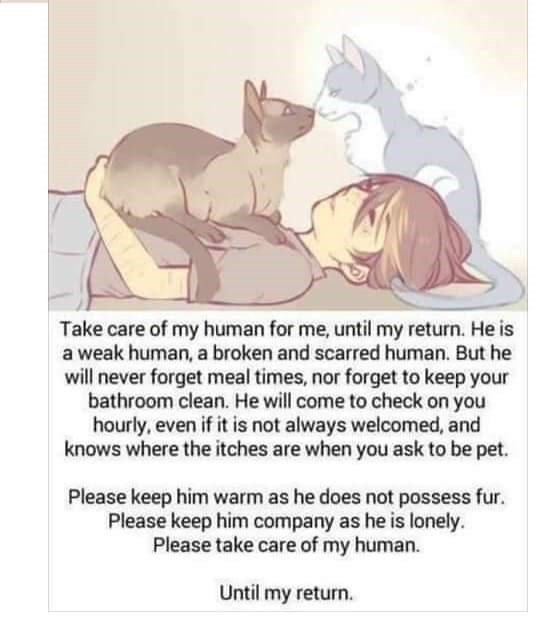 We all could use a hug every now and then, but these 21 puppers demand your love right heckin' now -- and we are on it!

Who could resist those puppy-dog eyes? Not us! 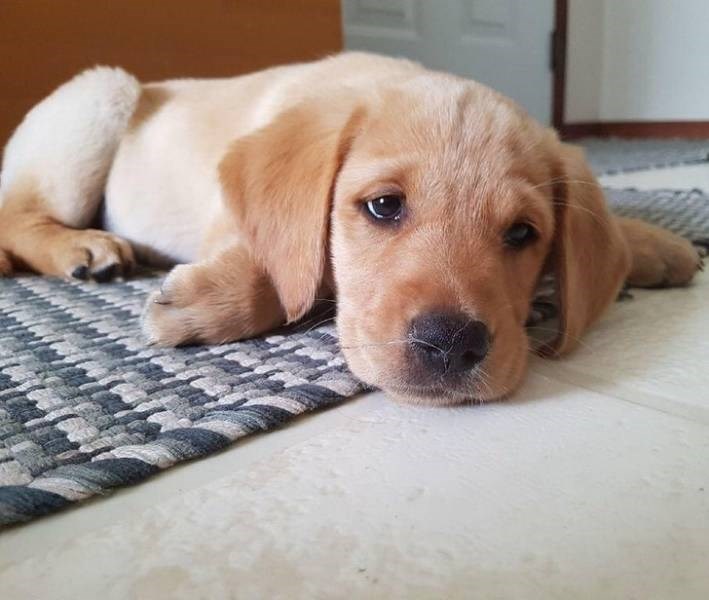 Just Days After Patrick Stewart And His Wife Announced Their New Foster Dog To The World, He Sadly Passed Away

You may want to stop here and go get that box of tissues. The 10-year-old pit bull, named Leonard, was rescued from a high kill shelter just a few days ago by rescuers Patrick Stewart and his animal loving wife, Sunny Ozell. They only had Lenny for a mere 48 hours before rushing him to vet where he crossed over the rainbow bridge. And while our hearts break for the couple and for Lenny, it does help to know that his last moments were filled with so much love. RIP Lenny, we will miss you. Read Sunny Ozell's heartbreaking message below. 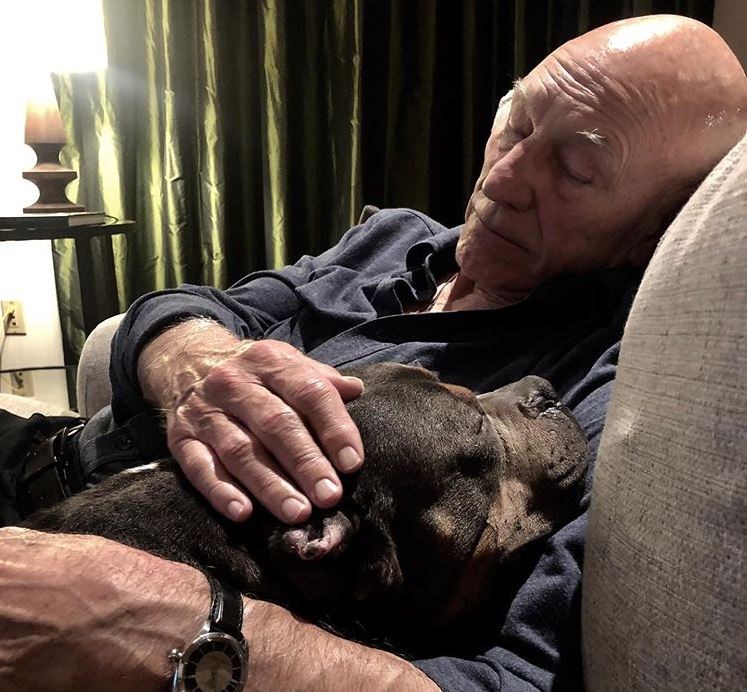 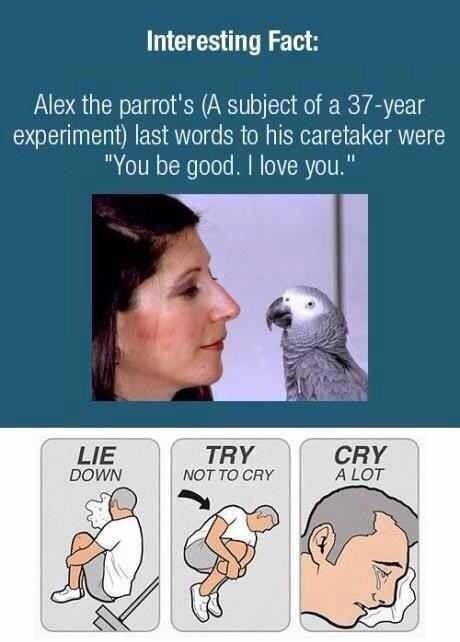 Another horse has been declared dead at the Santa Anita track in California, and that's just one day after another horse was pronounced dead. Two horses. Within two days. Adding to a shocking total of 29 since the racing track began its season in December 2018. And despite all this death, Santa Anita management has chosen to continue racing for the rest of the current meet.

This story was also reported on ABC News, Yahoo News, and Review Journal 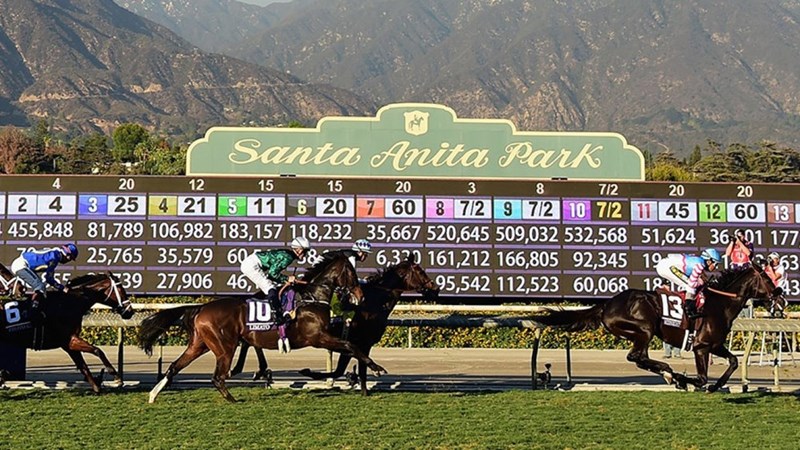