This page is for the Funny memes tag and is intended to include memes that are "trying" to be funny, as well as actual "funny memes", which is a subtle, yet very important inclusion detail that we felt needed to be pointed out. We also keep an updated list of the best funny memes which are filtered and sorted based on basic social media metrics. We've been told some of those are pretty funny.

If you love cats as much as we do, then we think you'll enjoy this fresh batch of feline-themed memes that cat owners will appreciate. Want even more cat content? Click here! 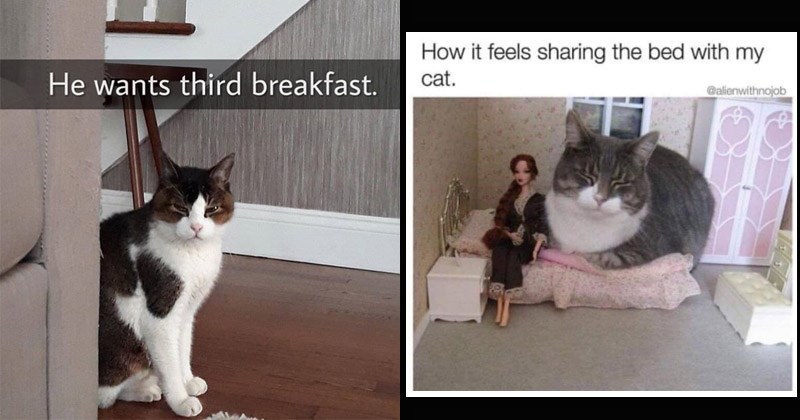 Happy Saturday! Well, to be honest all Saturdays are pretty much exactly the same since we've all been in quarantine, but those are unimportant details. Right now, we just want you to think about these cat memes. 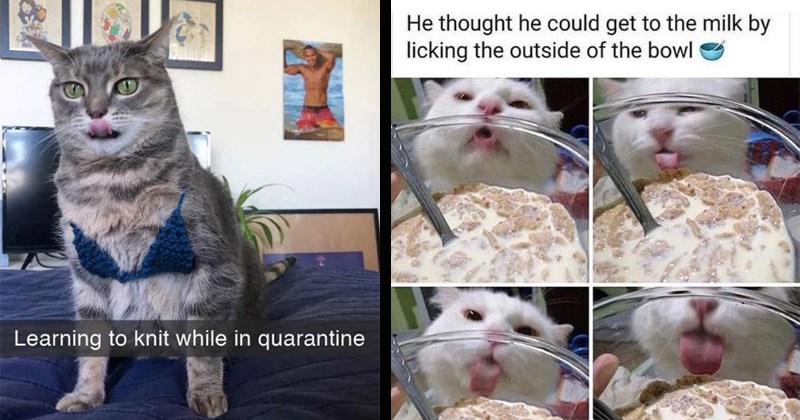 Happy Caturday! Enjoy these delicious kitty goodness memes, in all of their adorable glory. If these memes don't satisfy your craving, check out last weeks cat memes here.

If you are looking to continue your Caturday celebration with gusto, then check out these incredibly funny cat memes designed to bring this auspicious day up at least several notches. Or continue your Catnip-laced journey into even more hilarious whacked out cats. 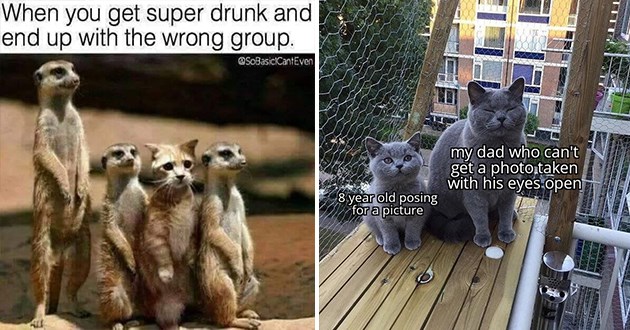 Do you like cats? Of course you do, otherwise you wouldn't have clicked here. Well it's your lucky day! We have 30 fresh cat memes right here for you - no brain power required on your end! 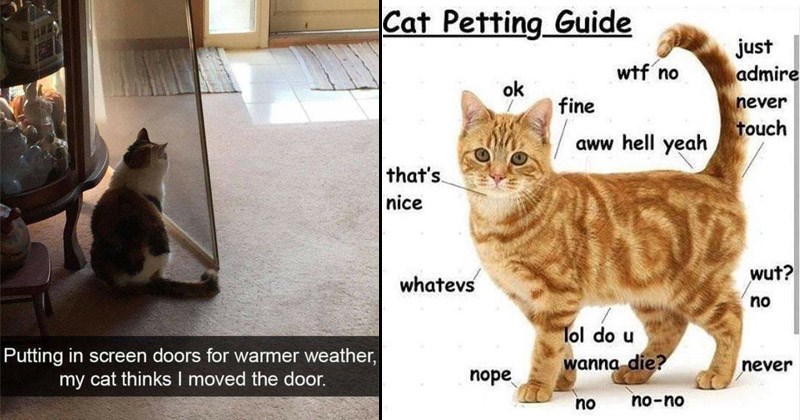 Animals Can Express Our Current Mood In The Most Accurate Way

Current mood: all of these animals.

Here are 15 memes to make your day even better. 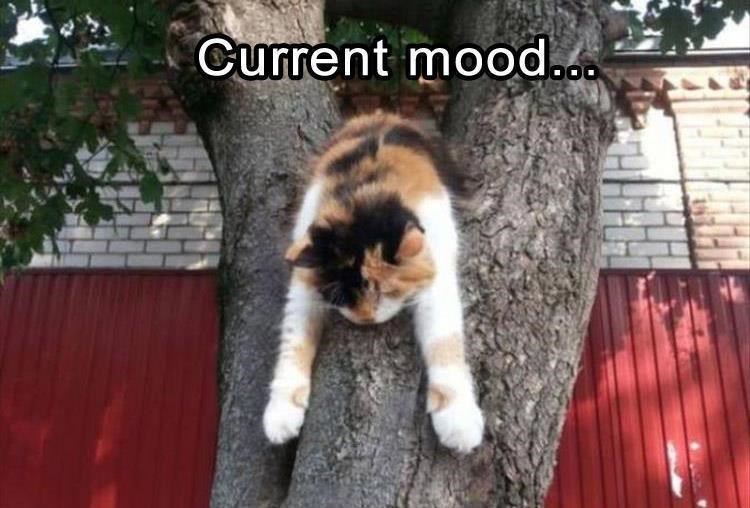 Happy Caturday, everyone! May your day be filled with the finest tuna, sun-filled catnaps, and may you finally catch the ever elusive red-dot. Just in case you need even MORE Caturday goodness, you've come to the right place. We've got all your Caturday needs right here. 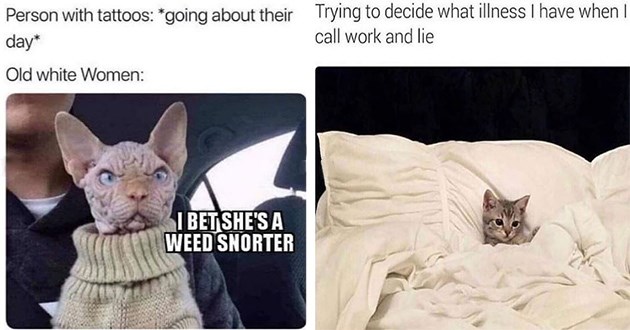 Cat pics don't always have to be cute. In fact, we think these cursed cat pics really capture the devilish nature of those little f*ckers perfectly. They're always up to no good, after all. But don't get us wrong - we still love 'em. 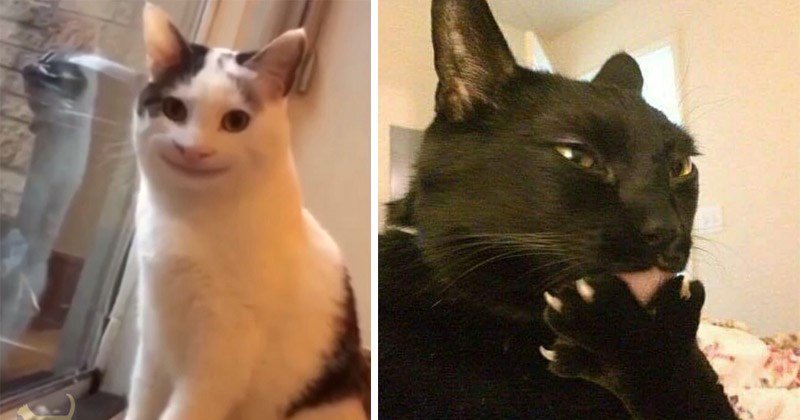 Twenty-Five Cat Memes And Pics Just In Time For Caturday

Happy Saturday! You've made it through another horrible quarantine week, and we think that's cause for celebration. So have some cat memes and pics; they're not exactly high-quality, but they are funny, and that's the most important part. 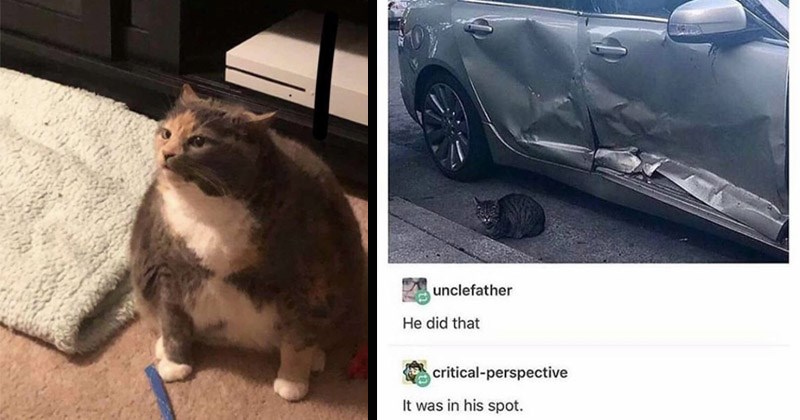 Sometimes you get lucky 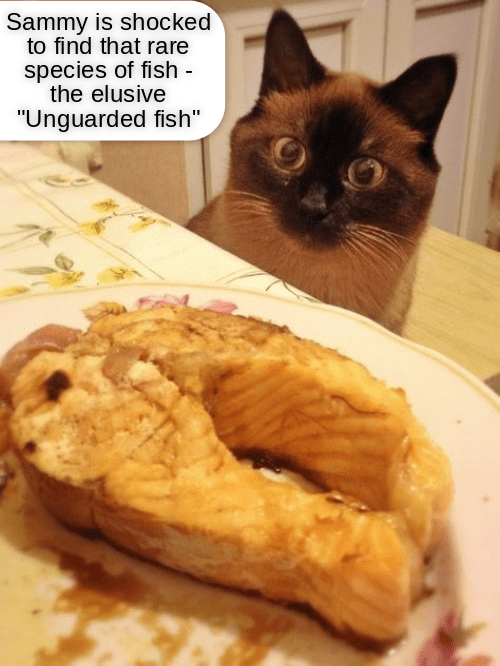 I can has fish fillet? 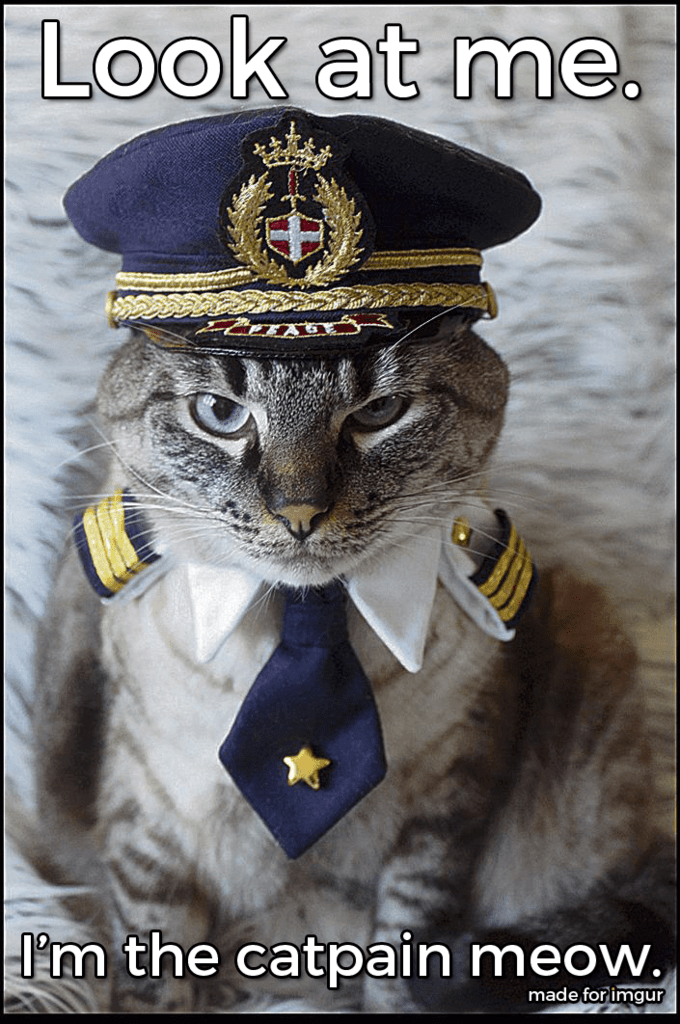 This meme was found on a list of 33 Funny Cat Memes via icanhas. 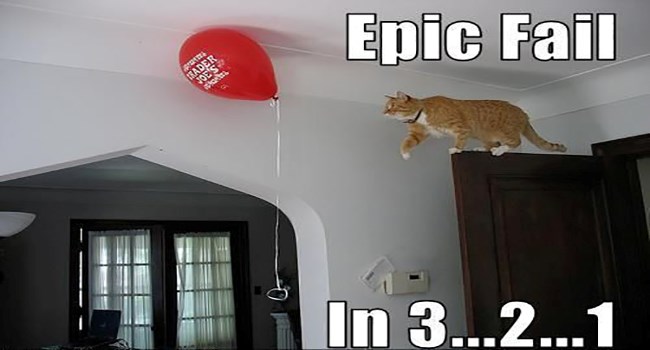 As if cats and kittens are not funny enough on their own and in memes, we've added another layer of humor here, and that layer is puns and that accompanying twinkle in the eyes when considering such things. 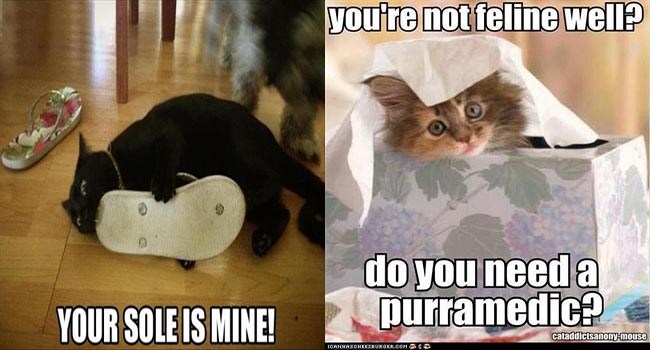 It's Caturday! Time For Your Daily Treat Of Cat Memes 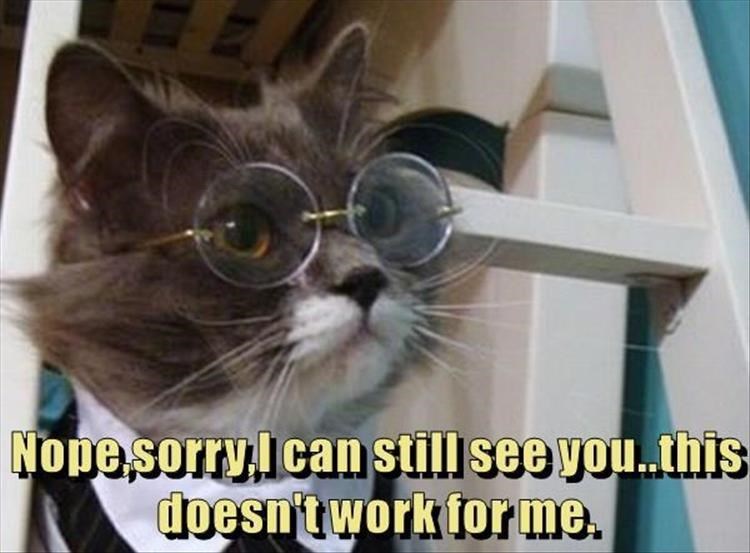 If you have cats, then they're probably really confused (and maybe a little annoyed) as to why their human is suddenly home all day, every day. Well, more time to bother you about getting fed, right? Anyway, please enjoy the following memes or these cat memes! And here are more cat memes if those weren't enough. 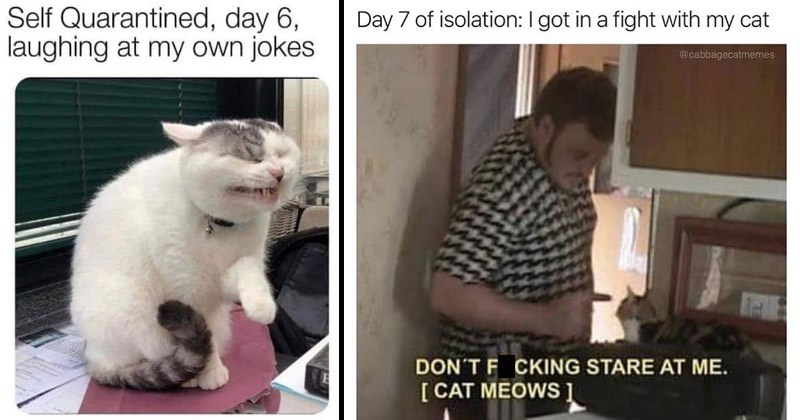 First of all, what the f*ck was up with artwork in the middle ages? It's like no one had any idea what a cat actually looked like. Luckily for us, it's provided for some excellent entertainment and ridiculous meme-age. Click here for some more medieval memes that made us wonder what the hell was going on back then. 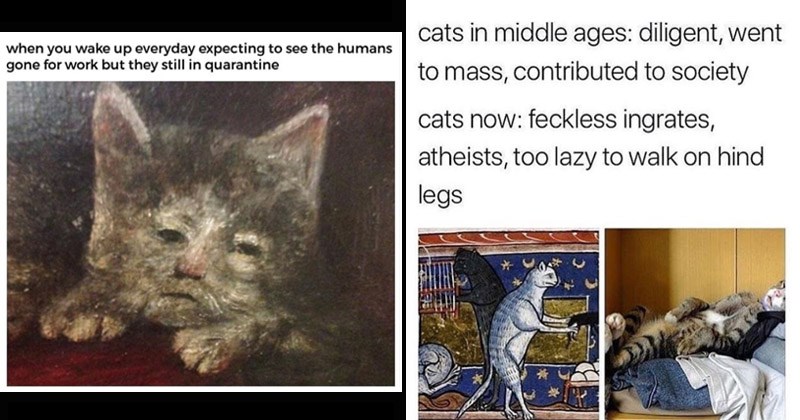 These Angry 'Cursed Cat' Memes Are Dank And Full Of Rage

This is definitely a dank meme that's going to require a little backstory, so here we go: an original (normal) photo of a black cat crossing the street was uploaded by Getty Images back in 2008 at the scene of a fatal crime in the United Kingdom. Years later memers began photoshopping the cat into a bizarre angry pose, and thus our Cursed Cat, AKA "Angry as Fuk," meme was born for you to enjoy! 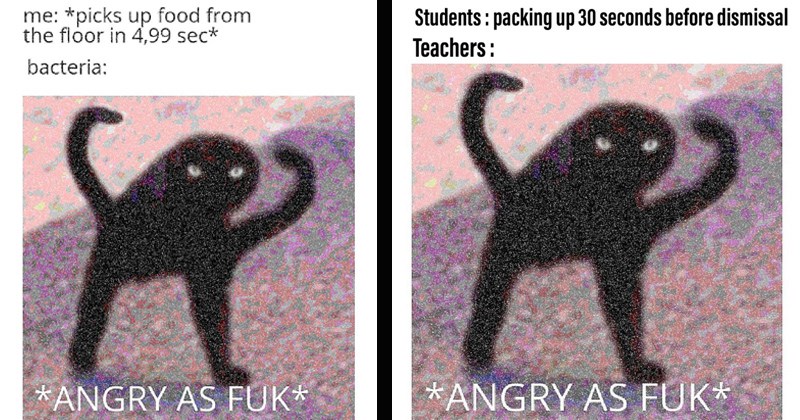