Get ready for some freshly borked doggo memes for a heckin' good way to approach your weekend. A little left to go, and you will be free, getting the bestest of all best doggo cuddles you will ever need.

But we promise that, for now, while you're hiding in the office or in class and sneaking a peek at some barkolicious memes since can't get your very own doggo to cuddle you, this is the best doggo treat you will get your hands on. Why? Because it's fully of heckin' good memes about some heckin' good boys.

So, bark away, dog lovers, and if these aren't enough, check out last week's doggo memes! 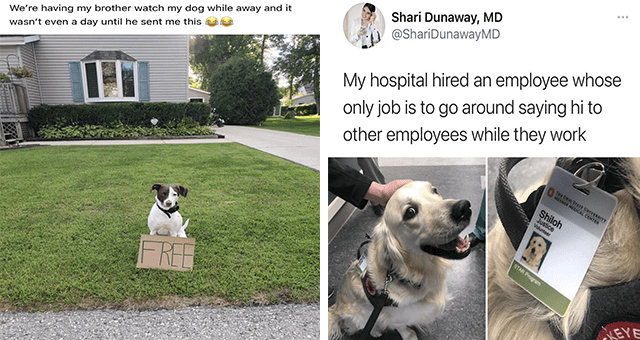 Getting injured is a scary thing for everyone- humans and animals alike, but sometimes, accidents happen. And though getting a cast put on may be a little scary in and of itself, we know it's for our own good.

It's hard to say whether these animals know the same thing, but we hope they do. We hope they understand that we're only doing these things to protect them. One thing is for sure, we know for sure that they are the bravest, most courageous little things, and since we know they're going through a tough time, we will give them all the treats and all the love they may ever need. 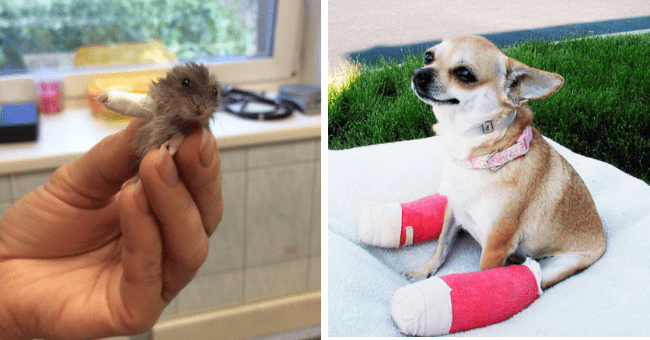 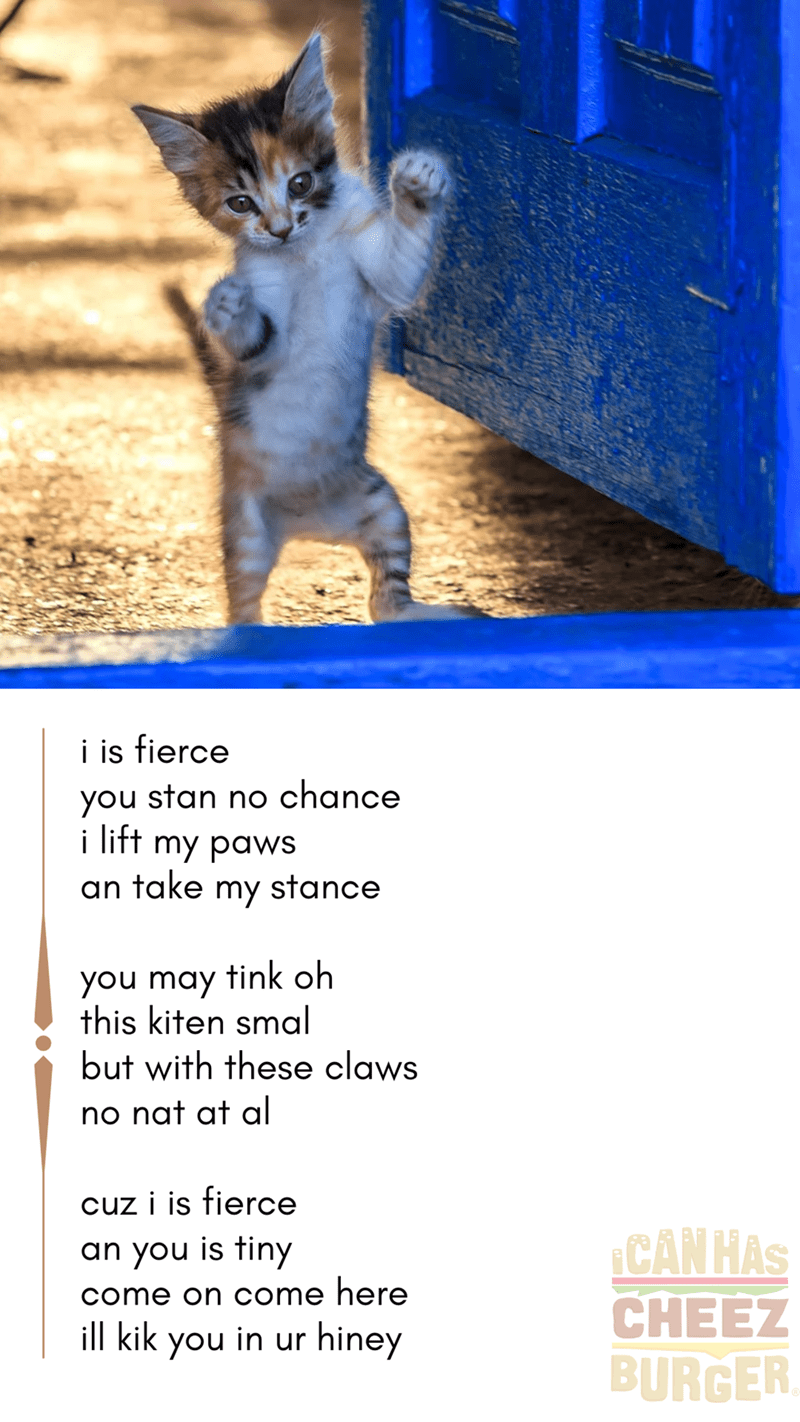 Via marielru
Repost
Recaption
Comments
I Can Has Cheezburger?
Favorite

Via My BB Bunny
Repost
Recaption

Awww! Motherhood is so beautiful, and when it comes to the animal kingdom, it's always just way too precious for us to handle. This bunny mama just gave birth to some bunbuns of her own and she has turned into a super mama bunny, grooming them, feeding them, and loving them. 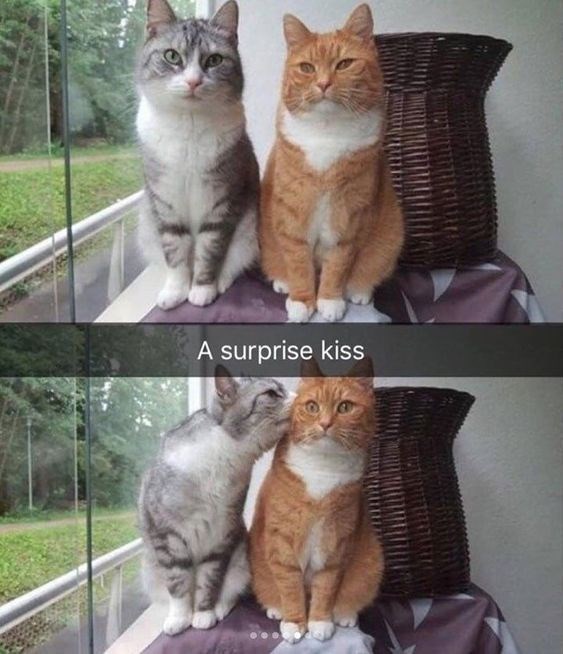 Via all-cats-are-beautiful-acab
Repost
Recaption
Comments
Advertisement
I Can Has Cheezburger?
Favorite 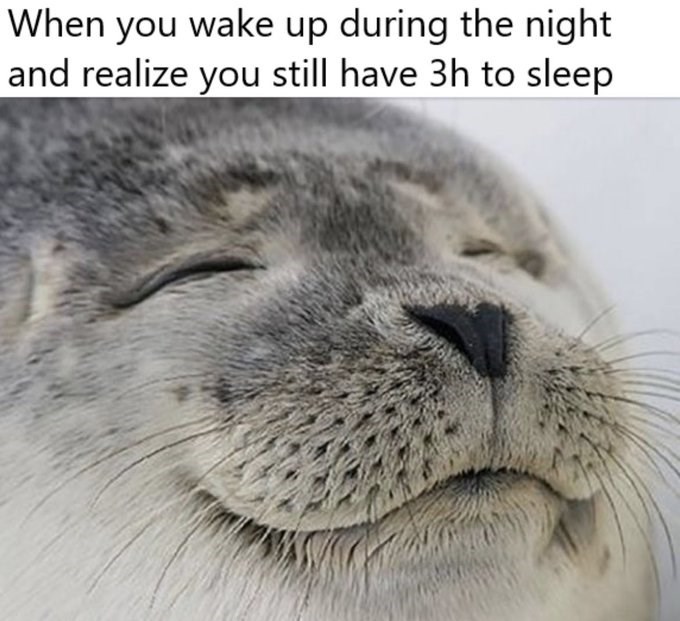 Via @RespectfulMemes
Repost
Recaption
Comments
I Can Has Cheezburger?
Favorite 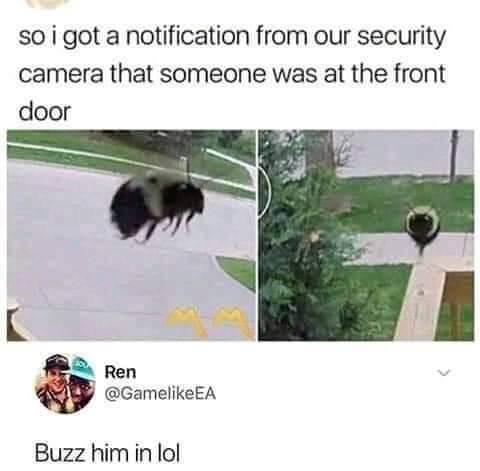 Via nuderefsarebest
Repost
Recaption
Comments
I Can Has Cheezburger?
Favorite

It's been the Monday-est week ever. And the fact that it's only Wednesday is certainly upsetting but we are choosing to look on the bright side of things and remember that we are halfway through this long week and the weekend is within reach once more.

It's officially humpday and we need something to boost our spirits, something to give us the energy to get through the rest of today, and hopefully, the rest of this week at ease. That's where we come in and deliver this lovely gathering of fresh and hilarious animal memes in the middle of the week. It's all for you.

When the week feels particular difficult we feel the need to bring some laughter and smile to the mix, it helps us so we figured it may help you as well! 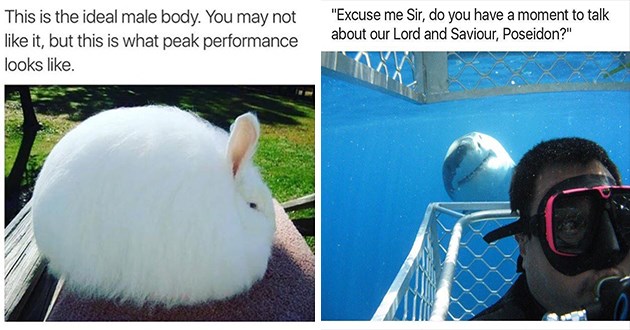 Cats, cats, and more cats. We adore our cats, from the first moment we see them to the moment they leave us. They are a part of us, our families, our lives.

We're there for their weird antics, late-night zoomies, early morning cuddles, all their vet trips, and sadly, for the moment they cross the rainbow bridge. We celebrate the life of humans and cats. Once a week, we honor all the cats, in this cat medley of different emotions. Some of these cat moments beautiful are silly, some are 'aww' invoking moments, and some are heartbreaking moments. There's a whole lot to take in but they're all cats and they are all beautiful.

For those who have recently lost a loved one, our hearts are with you. They may be gone but never forgotten. 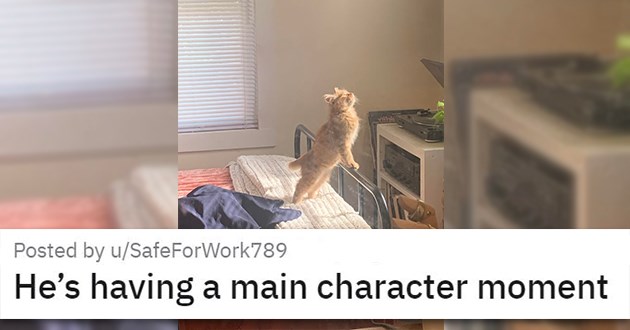 Handsome Doggos Getting All The Chicks

Anyone who has ever walked a dog knows that dogs are absolute magnets of attention. People stop, people wanna pet, sometimes you'll even start up a conversation with another dog owner and well, since your dogs are friends now, you kinda have to be friends too. Maybe you'll even find your future lady companion through one of these dog-initiated meetings. 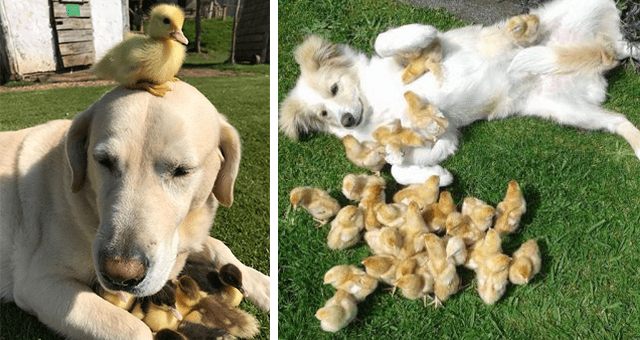 Animals Of Instagram Spotlight Of The Week: Bubby, The 3-Legged Cat

Once a week, we will be featuring an extraordinary animal account on Instagram! Their story, the adorable pictures, and pawesome videos! This week's spotlight goes to Bubby, the 3-legged cat.

Bubby hasn't had the easiest life. According to a Facebook post by Exploits Valley SPCA Adoptables, the year was 2012 when Bubby first emerged in a stranger's kitchen. By then, he was already full-grown and already missing his arm and half of his tail. Bubby had begun to form a friendship with the man whose house he randomly showed up in. Bubby would come often to play with the man's cat, Seson, and when Seson passed, Bubby still came around to visit.

The man loved Bubby and wanted to keep him but was unsure if Bubby already belonged to anyone, as Bubby was constantly trying to get outside. He determined that Bubby could not be contained.

In 2017, the man sadly passed away and Bubbly entered the house once more after his death but never returned. The man's family knew just how much the man cared for Bubby and wished for him to be cared for after his passing, but without Bubby's return, they assumed he had passed on himself.

From 2017-2019, life had been undoubtedly difficult for Bubby. In the summer of 2019, a man by the name Ray Pinsent, who knew the man and Bubby's close relationship, happened to spot Bubby once more. Ray knew Bubby wouldn't be able to survive long on his own, so he set to catch him. Ray went to the man's house, there were new people living there who were afraid of cats, and he pleaded with them to please open the door should she see Bubby and call him.

The followed day, Ray's phone rang and he was told the cat was in the kitchen. Ray took Bubby's lifeless body to the shelter and the vet claimed that Bubby began to purr while laying on the exam table. As Bubby was recovering, his picture was posted online for any information and that is when the man's daughter came forward, emotional, and brought Bubby the dishes he used to eat out of when we would come for visits. She told the story of Bubby to a rescue volunteer at the shelter. Bubby was then adopted by that same rescue volunteer Sarah MacLeod

Bubby's new owner, fell in love with his sad human eyes and couldn't part with him so she took Bubby home writing, "Bubby purrs the minute he wakes up in the morning and as he goes to sleep every night. He's never asked to go outside once. He must know that he's home now, for good."

We're over the moon that Bubby has found the purrfect family that will love him forever. You can follow Bubby's journey on Instagram!

Read up on last week's star on Instagram, Eric And Ollie, the Persian cats! 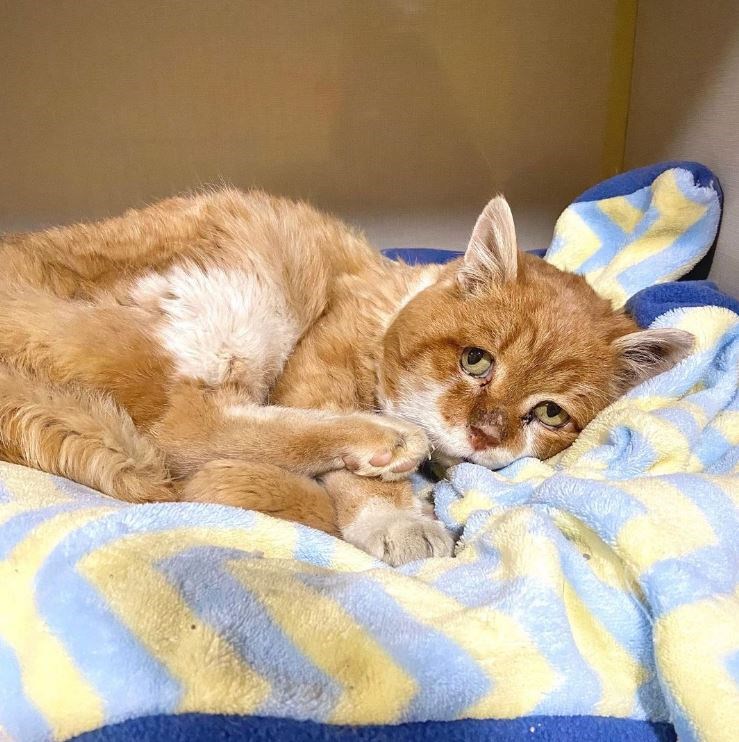 Do you know those times when you catch your pet doing something really weird and just have to snap a picture and send it to your friends? No explanation, no context, just a picture of your black cat staring at your new black cat figurine and having an existential crisis. Yeah, those are some of our favorite moments too.

Week by week, we bring you a whole collection of moments such as these - pictures with no context at all that you know there's a story behind, and that their story could never be covered in anything less that 1000 words. They're funny, cute, inspiring, and totally perfectly timed, and they are the best ones we've seen this week. So, enjoy and may you be inspired. 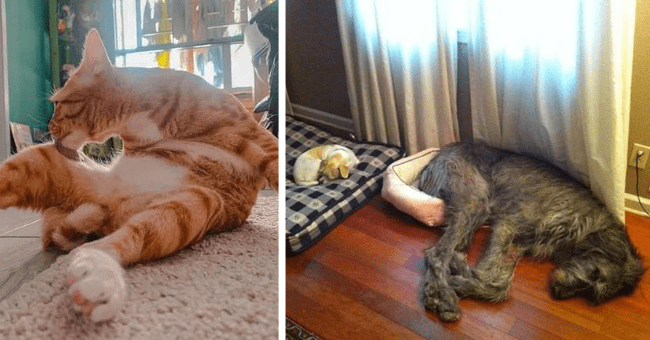 A happy ending for this beautiful gentle giant.

Kaavan, a 35-year-old and overweight Asian elephant, has spent the majority of his life alone in captivity. Kaavan has spent all those years alone in captivity in a controversial Islamabad Zoo, in Pakistan, where Kaavan suffered from lack of exercise and malformed nails that come from living in inappropriate structures. Back in 2012, after Kaavan partner passed on, he was dubbed the "world's loneliest elephant."

Islamabad's High Court closed the zoo due to its poor conditions that gain public outcry and gave the international animal welfare organization Four Paws permission to take Kaavan and transfer him to a sanctuary where he can live with companions and in peace.

As of now, Kaavan has arrived in Cambodia, and thanks to the large effort of music icon - Cher. Cher was also there in Cambodia to greet the elephant.

Cher was first made aware of Kaavan and his situation from the people of Twitter, thanks to the Smithsonian Channel producing a documentary on Kaavan's story. Cher told CNN, "I thought, 'how can I fix this? How can I save an elephant who's been shackled to a shed for 17 years and who is a thousand miles away? This is Free The Wild's first big rescue and I am so proud."

Cher campaigned for Kaavan's freedom for many years and just ahead of Kaavan's release, Cher traveled to Pakistan and serenaded Kaavan with Disney's classic, "A Dream is a Wish Your Heart Makes." This past Friday. Cher tweeted her thanks to the Prime Minister of Pakistan, Imran Khan, writing, "Just came from meeting to thank Prime Minister Imran Kahn for making it possible for me to take Kaavan to Cambodia."

Thank you, Cher, Four Paws, and all those involved for making Kaavan's dream come true! Our hearts are overjoyed at the happy news! We wish you a lifetime of happiness, Kaavan! 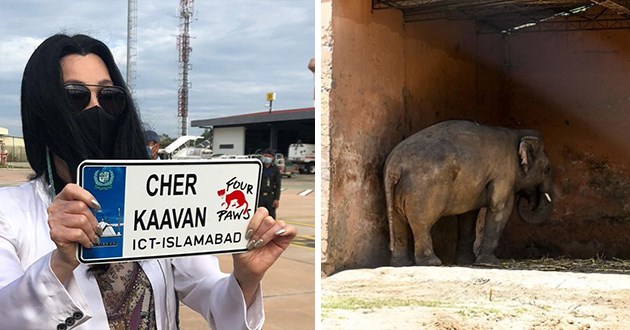 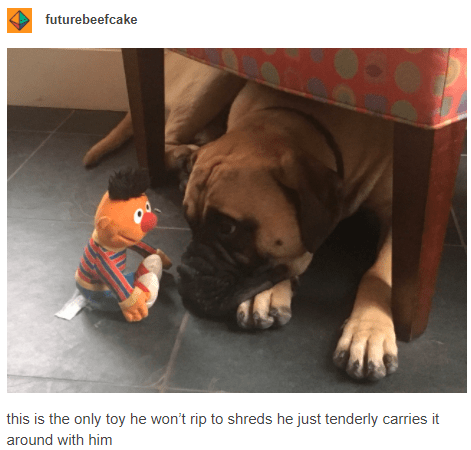 Via cherryshrimp
Repost
Recaption
Comments
Advertisement
I Can Has Cheezburger?
Favorite

Oh, kittens... little balls of endless energy. Jumping around, running, curious about everything. How an energetic little creature like that turns into the most chill, lazy being is beyond us. And it's totally beyond this kitten's dad as well.

He seems to understand though, letting his little kitten buzz around and be generally annoying and adorable. Or maybe he's just doing the cat thing and being totally unbothered by anything, including its own widdle kitten. Regardless, it's adorable, and we absolutely love both this kitten and its dad. 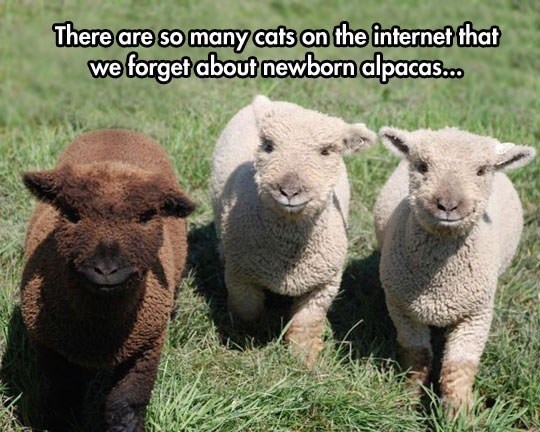