Quite often, there are times when thing happen little kittens get to vet clinics, and they're not ready to be adopted yet. It could be for all kinds of reasons, and it might be that they'll be there for a long time until they're better. What we never think about really is the nurses' attachment to these kitties. We know that if it us who get attached to half of the adorable kittens on the internet, we would definitely get attached to the kitties.

To lessen their attachment as much as possible, they give the kittens temporary "bad" names so they don't constantly call them "the black cat" and so they have a place for detachment. This tumblr story is one of a nurse who couldn't help herself and ended up adopting one of these kittens - one named "Trash Bag".

Only Trash Bag turned from a temporary name to its permanent one. And we just have to say - we love you, Trash Bag. 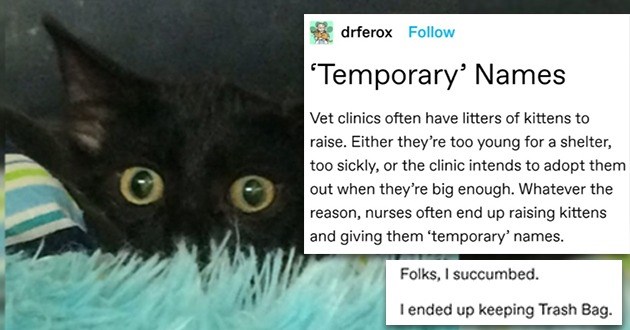 Cats On Catnip: The Madness Continues