Pitbulls are portrayed in the media as vicious dogs. Dogs that harm. But it's how dogs are raised that create their personality. Pitbulls are like any other dog or even puppy. They are loving, loyal and protective. They are dogs. Living and breathing. So when it came to our attention of an ongoing trend #PitbullDropOff, we had to make it known in order to protect pitbulls everywhere.

#PitbullDropOff is a disgusting trend in which absurd people, (who have lost their minds and have no morals) go and "adopt" pitbulls looking for good homes, only to be taken right away to be killed. The worst part is that it has become a Twitter Trend that yet hasn't been stopped. Many are claiming that these posts are FAKE, and a 4chan. Meaning people who are just trolling twitter users. Regardless, we are issuing a WARNING to all those with pitbulls/ pitbulls for adoption, to be aware and to really find these peoples true intentions.

Pitbulls are kind, full-hearted and loving dogs. They deserve a loving family. 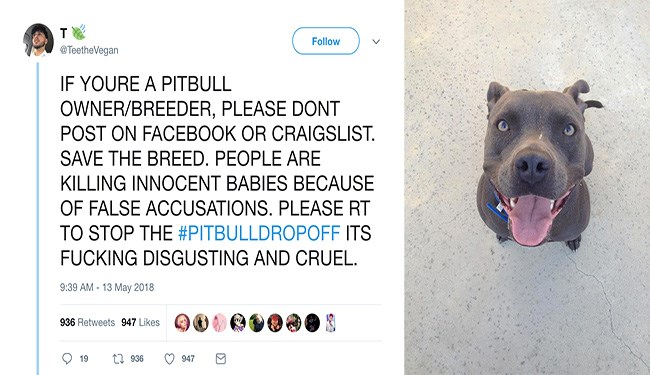 Animals Being Jerks Is Never Not Funny