Story Of A Bat Named Lil' Drac Told Through Gifs

Say "hello" to the cutest little short-tailed fruit bat named Lil' Drac! Lil' Drac is an orphan that is being hand-raised by Bat World Sanctuary.

Bat World Sanctuary rescues hundreds of mistreated bats every year. It is a non-profit, accredited organization that gives lifetime sanctuary to non-releasable bats, including those that are labeled orphan, injured, and retired from exotic pet trades, zoos and even research facilities.

Lil' Drac's mother was sadly another casualty from zoo closure happening across the US. His mother was young, stressed from the conditions in which she was being kept, trauma of being captured and transferred to an unfamiliar environment. Due to all this, she abandoned Lil' Drac right after he was born. Lil' Drac was found "on the padded floor of the indoor flight enclosure at Bat World Sanctuary, curled up in a little ball."

For all of their bat updates, photos and more, check out their Facebook BatWorld.

Also, Lil' Drac now has a book, for all you bat lovers out there! 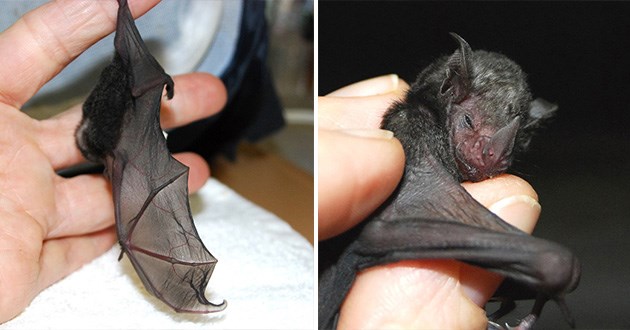 Cats VS Many Invisible Walls Of Saran Wrap